Lots of early public domain press coverage of Lionel Barrymore today as we trace his rise in the papers from the time he was a toddler through to the dismayed announcement that he is entering films. But it's mostly Barrymore before the Biograph this time around.

This late 1882 clipping is a bit of cheat considering Lionel is just four years old, Ethel five and Jack still an infant, but it was the earliest of any I could find naming Lionel. 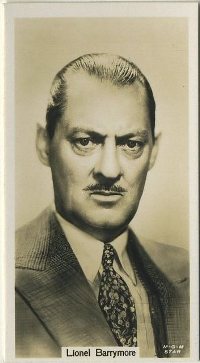 In catching up with grandmother Louise Lane, aka Mrs. John Drew, the actress who had appeared on stage with two generations of Booths, including the infamous one, says:

... her desire in public is to be a great comedienne and her desire in private is to be let alone. She takes a great interest in her protege, Miss Stevens, and lives for her two grandchildren, Lionel and Ethel Barrymore, who are being educated by her for the stage.

More interesting is the first mention I could find of Lionel in The New York Times. The July 2, 1893 has him in the family business at just 15 years of age:

The repertory of the Drew combination next season will be continued to "The Rivals," by Sheridan and "The Road to Ruin," by Holcroft. The principal members of the company will be Mrs. John Drew, her son Sydney and his wife, Gladys Rankin, McKee Rankin, Lionel Barrymore, Mrs. Drew's grandson, Charles Erin Verner and Owen Fawcett.

No More Than a Name

The Barrymore-Drew family tree composes most of a brief bit concerning Lionel in an 1899 newsclipping. Lionel is then of the "Arizona" company and it is said that "the young man is doing his best to live up to his name and the traditions that encircle it."

Lionel Barrymore, the son of Maurice Barrymore, was recently given the opportunity of playing the leading role in Augustus Thomas' new play, "Arizona," which has been running in Chicago during the past couple of months. Young Barrymore had been playing a secondary role and the impression he would make in the stronger part was awaited with no little anxiety by his friends. According to one of the reliable critics he simply walked away with the part--no easy one for his father in his prime--and there was suprise as well as delight written on the faces of the interested and critical few in the audience. The boyish earnestness and absolute sincerity in all that Mr. Barrymore did simply put his performance beyond question as to effectiveness.

After the success of Charles Frohman's The Other Girl on Broadway it takes to the road with its star Lionel Barrymore.

The development of Lionel Barrymore is arousing no end of interest these days. Four seasons ago he was a member of James A. Herne's company in "Sag Harbor," and has since kept working his way along until one day along came uncle John Drew at the Empire theatre with "The Mummy and the Mocking Bird." The advance notices skipped lightly over Barrymore's name, but the first night's criticism placed his patronymic in the head line.

In The Other Girl, originally titled The Parson and the Pugilist, Barrymore plays the pugilist. He doesn't seem to know this though having lost his memory. Brought into the home of a normal New York family Lionel plays for laughs.

The show had originally opened at the Criterion Theatre on Broadway, December 29, 1903 and ran 160 performances before hitting the road.

Speaking of that previous year in New York the unattributed author writes that:

It was said that no longer was the question asked of the box office man, "What play is on tonight?" but, "Which Barrymore is here this week?" At one time in New York at the academy of Music was one of the Barrymores, at the Hudson was Miss Ethel, at the Savoy was Jack, at the Criterion was Lionel, and at the Empire was their "Uncle John" Drew.

Rehearsals begin next month for the production of "Alice-Sit-by-the-Fire," the new play by J.M. Barrie in which Charles Frohman will present Ethel Barrymore. To this will be added Mr. Barrie's one-act play, "Pantaloon," in which Lionel Barrymore will play the chief part, and in which Jack Barrymore will also appear. Both of Miss Barrymore's brothers will be associated with her during this assignment.

The Barrymore laden credits can be viewed at the IBDb.

The 1908 report titled "A New Ethel Barrymore" rings sadly now owing to the death of the child named for her famous Aunt just three years later, but the period report on Lionel's own personal happenings is fascinating.

Lionel Barrymore gave up the stage about two years ago to study painting. He rented a studio in the Latin Quarter in Paris, went to work in earnest, and has been there ever since.

Not new information by any stretch but if you are not very familiar with Lionel's biography and only know that he enjoyed the fine arts in his spare time perhaps the level of dedication described comes as a surprise.

Returns to the Stage

It was reported on Broadway last night that Lionel Barrymore, brother of Ethel and John, would probably return to the stage this season, to appear in "The Fires of Fate," under the management of Charles Frohman.

Last night would be November 3, 1909. One report from just after New Year's, 1910 has Lionel leaving the show in Chicago after a bout of appendicits. Lionel never played in The Fires of Fate on Broadway where he would not return until 1917's Peter Ibbetson. He'd opt for a vaudeville tour in the near future and have a stop at the Biograph company before returning to the legitimate stage.

More background on Lionel's recent immersion in the arts is offered:

This particular Barrymore retired from theatrical life about three years ago, and went to Paris to study art ... At the time he went away the statement was made that he intended to devote himself entirely to painting and drawing. Evidentally the lure of the stage became to strong to be resisted--he comes of a family of actors--and he returned to New York early last Summer with his wife and their two-year old child.

The article concludes noting that since his return to America Lionel and wife, the former Doris Rankin, are now living in Greenwich, Connecticut.

Lionel Barrymore and McKee Rankin, who are making a special tour of the Orpheum circuit, will appear in a sketch based upon a timely topic called "The White Slaver," written by Mr. Barrymore. Rankin's name will live a long time in the history of the American stage and Barrymore is recognized as one of the cleverest of the present-day leading men and a worthy descendant of his illustrious father, Maurice Barrymore. They are assisted by Miss Doris Ranking, a clever little actress and a daughter of McKee Rankin.

They leave out the fact that Doris is also Mrs. Lionel Barrymore at this time.

Reported May 10, 1913 with actual headline reprinted above:

Lionel Barrymore, a scion of the famous Barrymore family, is being starred by the Biograph "movie" company in a number of feature films. It is a significant fact in the history of the transition of the notable stage folk from the legitimate to the screen play.

Not so long ago the "movie" was a subject of derision to the actor of place and rank. Today the foremost of the speaking stage are finding their way quite naturally and with no sign of hesitancy into the company of players who act in pantomime alone.

Just what drew Lionel Barrymore into the moving picture business may not be definitely known. But it's safe to wager that he did not accept the position without the exchange of some real money.

One of the new Biograph pictures in which Lionel Barrymore appears is "The Lady and the Mouse," an old-fashioned romance.

What is known by the tone of this article alone is that the "movie" remained subject of derision by the press who covered the legitimate.