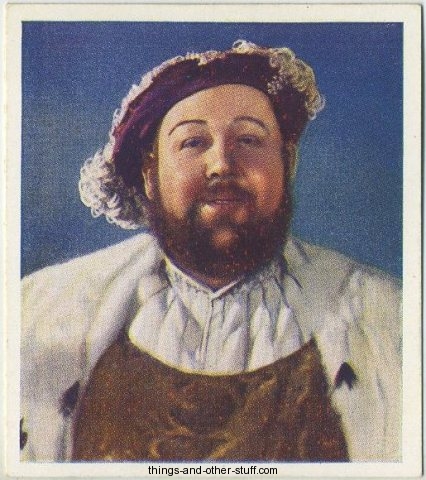 36 card set of tobacco cards issued by Godfrey Phillips in 1938.

Issued out of Great Britain.

A colorful set of cards in the size and style of other Godfrey Phillips sets such as Famous Love Scenes and Shots from the Films.

The "Characters" highlighted as "Coming to Life" in this series are distinctly British in tone though with some exceptions that are American in character and/or Hollywood based performers.

Charles Laughton is featured on two separate cards in the set.

Just click on any image to open to full size and from there you can scroll through each card in the gallery. Text checklist follows below.

1 - George Arliss as the Duke of Wellington in The Iron Duke
2 - Leslie Banks as the Earl of Leicester in Fire Over England
3 - John Barrymore as Mercutio in Romeo and Juliet
4 - Lionel Barrymore as Andrew Jackson in The Gorgeous Hussy
5 - Elisabeth Bergner as Catherine in Catherine the Great
6 - Claudette Colbert as Cleopatra in Cleopatra
7 - Ronald Colman as Sidney Carton in A Tale of Two Cities
8 - Joan Crawford as Peggy O'Neal in The Gorgeous Hussy
9 - Gwen Ffrangcon-Davies as Mary Tudor in Tudor Rose
10 - James Ellison as Buffalo Bill in The Plainsman
11 - Kay Francis as Florence Nightingale in The White Angel
12 - Errol Flynn as Major Geoffrey Vickers in The Charge of the Light Brigade
13 - Clark Gable as Parnell in Parnell
14 - Greta Garbo as Marie Walewska in Marie Walewska
15 - Bonita Granville as Ann in Maid of Salem
16 - Sir Cedric Hardwicke as Charles II in Nell Gwyn
17 - Oscar Homolka as Paul Kruger in Rhodes of Africa
18 - Victoria Hopper as Lorna Doone in Lorna Doone
19 - Leslie Howard as Romeo in Romeo and Juliet
20 - Walter Huston as Cecil Rhodes in Rhodes of Africa
21 - Fritz Kortner as Abdul Hamed II in Abdul the Damned
22 - Matheson Lang as Francis Drake in Drake of England
23 - Charles Laughton as Henry VIII in The Private Life of Henry VIII
24 - Charles Laughton as Rembrandt in Rembrandt
25 - Raymond Massey as Philip of Spain in Fire Over England
26 - Paul Muni as Louis Pasteur in The Story of Louis Pasteur
27 - Nova Pilbeam as Lady Jane Grey in Tudor Rose
28 - William Powell as Flo. Ziegfeld in The Great Ziegfeld
29 - Basil Rathbone as the Marquis St. Evremonde in A Tale of Two Cities
30 - Flora Robson as Queen Elizabeth in Fire Over England
31 - Norma Shearer as Juliet in Romeo and Juliet
32 - Pamela Stanley as Queen Victoria in Victoria Regina
33 - Phyllis Neilson-Terry as Olivia in Twelfth Night
34 - Desmond Tester as Edward VI in Tudor Rose
35 - Henry Wilcoxon as Richard I in The Crusades
36 - Loretta Young as Berengaria in The Crusades

Note: There will be no mailing tomorrow or on any Sunday … END_OF_DOCUMENT_TOKEN_TO_BE_REPLACED