It's been a week since I showed off the updated Quaker Standees gallery and checklist page. The auctions have ended and I even wound up with a little more than I expected out of them. Thank you if you were among the bidders!

Which made me think a Prices Realized page was in order. Now there's a specific reason I'm posting this as its own page rather than tagging it onto the already existing Quaker Standees page. That would be the difference between Prices Realized and a Price Guide.

I've more or less spent the past 12 years or so, ever since I've been selling online, railing against Price Guides. This is the polar opposite of how I was back in the late 80's/early 90's when you could find me in person set up a show. I'd either have a guide in my hands or have already computed marked prices based on a percentage of guide.

Not so much follies of youth (though I was a bit rigid!) as much as changing times.

First off, you're not going to find the mid-1930's Quaker Oats Standees in any official Price Guide that I'm aware of. Heck, I haven't even hung a certain date of issue on them or confirmed that the 32 different listed on the gallery page make up a complete set. Somebody's going to price them?

If you wrote to me because you had a batch of the Standees and were wondering what they were worth I couldn't tell you--but I sure could make you an offer on them!

So I set these prices here, separate, away from the more official gallery and checklist page to avoid confusion. After all, if you've read this far then you'll know that the prices that follow below are not what these are worth. Just what someone paid.

More exact what someone was willing to pay on February 9, 2012. They will pay more or less on February 10. 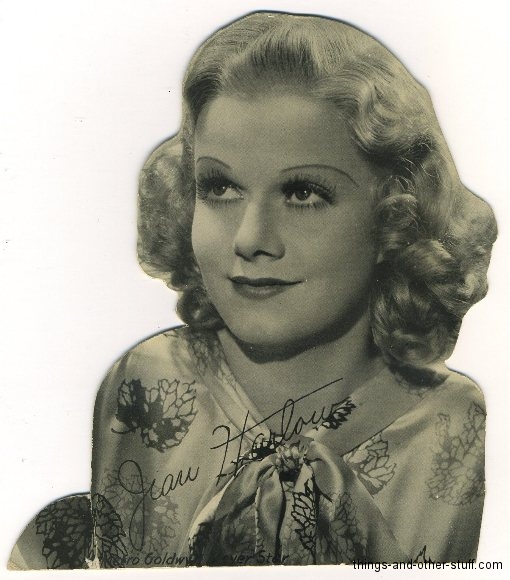 Average grade of these was VG or 4/10 to VG-EX or 4.5/10, with a few a notch or two lower. Interesting to note that the Harlow piece was in the worst condition of the bunch, actually missing a tab. Yes, I advertised it as such and drew attention to the flaw, but then again, it is Jean Harlow. And these were Quaker Standees. What about condition? Condition is very important but one thing the online market bears out over and over is that rarity trumps condition. And so I expected Harlow to top this list.

Based upon expectations I got out of them a little more than I expected, though not a tremendous amount more. Actually I expected to get about 10% less but I'd also expected about 8-10 of them to pass (not receive a bid). I was pleasantly surprised that they all sold. A few buyers bought multiple pieces and I have a feeling those cagey few realized that they'd better bid on them all because there's no telling when you'll see them again.

Singles pop up time to time, but this was the biggest selection of mixed singles I've seen offered at once and I'm proud to have offered them.

I was surprised Cagney and Dietrich only received an opening bid each. In fact I had expected Dietrich to be among the top three in price when all was said and done. I also expected Errol Flynn, Mae West, and Joan Blondell to be bid higher, though there were some pleasant surprises for me among other pieces.

All in all a successful night. I hope it doesn't take as long for me to lay hands on a large grouping of these in the future. They're a favorite and I'll be buying when I can.