If you were to quickly scroll through the Abandon Ship screen captures illustrating this article the one thing you'd find in common from image to image is a look of absolute desperation. A lot of fear. I didn't have to work very hard to locate these shots. Abandon Ship is all fear and desperation.

Abandon Ship (1957), also known as Seven Waves Away, is one of only a few productions from Tyrone Power's own Copa Production company. Abandon Ship was filmed in Britain in between stage runs for Power starring in a revival of George Bernard Shaw's The Devil's Disciple. Just 43 at the time Abandon Ship was made, Power would only appear in two additional movies before suffering a fatal heart attack during the making of Solomon and Sheba in 1959.

Beyond Power and Lloyd Nolan the cast of Abandon Ship is almost entirely European. Stephen Boyd is second in command a couple of years before Ben-Hur (1959) fame. Mai Zetterling, romantically involved with Power at the time off-screen (Guiles 272), plays Power's love interest, a nurse. And Upstairs, Downstairs fans will be delighted to find both Gordon Jackson and David Langton in smaller, yet prominent roles in Abandon Ship. 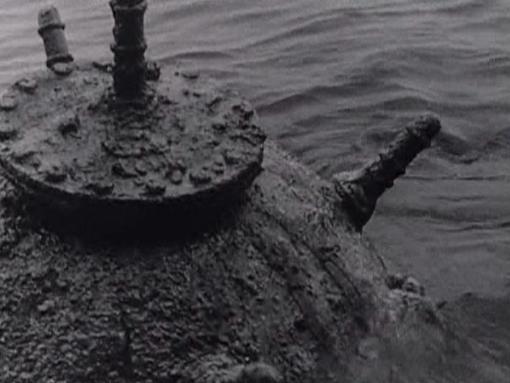 Abandon Ship opens with the focus on a derelict mine drifting aimlessly in the open sea. Moments later there's an explosion and shouts of "Abandon Ship!" in the distance. A voiceover declares that the super liner Crescent Star exploded one September 27 and sank in 7 minutes. Of the 1,156 souls on board, 37 survived.

This isn't going to be pretty.

A few survivors call from a piece of flotsam as Tyrone Power swims towards them. Power's Alec Holmes pulls himself up. There's a woman half-mad because she's become separated from her 7-year-old child. One of the four people floating adrift is already dead. His body is soon rolled over the side. Another man is even more panicked than the woman was, fearing the loss of his wife. 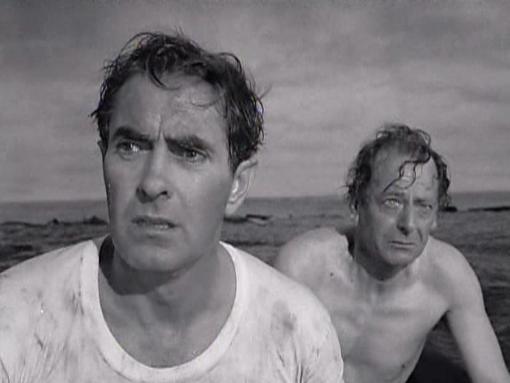 The small group spots a lifeboat in the distance. Alec notes that it's the Captain's shore boat. At only 18 feet long it obviously already has too many people in it. They're better off where they are. Someone is spotted swimming towards them. Alec dives in to rescue them and it turns out to be Julie (Zetterling), the ship's nurse and Alec's girlfriend. Ecstatic over finding each other the reunion is cut short by a shark circling them. Alec and Julie have drifted closer to the heavily populated Captain's boat where Mac (Boyd) calls to them and fires a gun at the shark. 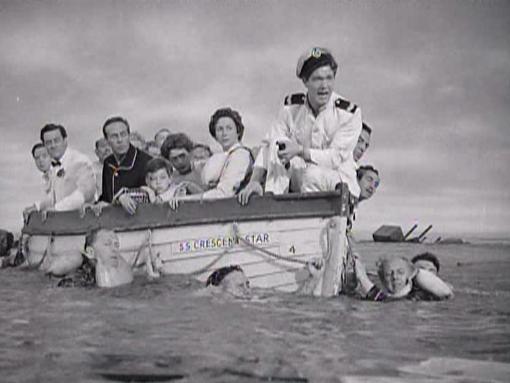 We never again hear from the three people Alec left to rescue Julie.

Abandon Ship is not for the faint-hearted.

It's a brutal, vicious tale about a hopeless situation. Alec and Julie make 27 people, and one dog, on board and around the Captain's shore boat. The boat is built to handle 9 people, not 27.

Alec and Julie arrive just in time for the injured Captain to pass command off to Alec before he dies. Moments after the Captain's body is rolled over the side of the boat into the sea the others are demanding answers from Alec.

He has none. Moments of hope that Alec originally conveyed are dashed when Sparks (John Stratton) is snapped out of his panic and tells Alec that no S.O.S. was ever sent. The disaster happened too fast for him to get word out to anyone. Thoughts of a rescue just six hours or so off are dashed by the revelation. They are stranded in the middle of the sea in a tiny boat filled three times to capacity. Africa is the closest destination at 1,500 miles away.

Julie (Mai Zetterling) gazes upon Alec after a tough decision

And there are injuries. Merritt (Jackson), a member of the crew, has two broken wrists; Ruth Spencer (Clare Austin) has a gashed arm that's becoming gangrenous; Mr. Kilgore (Ralph Michael) has swallowed a lot of oil from the ship; Mrs. Kilgore (Jill Melford) gasps for breath because of her broken ribs. Worst of the lot however is Alec's buddy Kelly (Nolan) who was in the air conditioner room when it exploded and filled his body with various screws, nuts and bolts. He can barely move.

But he can speak. And it's Kelly who first puts the terrible idea into Alec's head. "You've got problems, buddy. More than you know," he warns Alec early on.

With the skies threatening Kelly elaborates for all: "He can't save all your lives. There are too many people in this boat!" More specifically, "He's got to put at least twelve over the side." And a final plea to his friend: "Alec, don't give food to the dead. They'll just drag you down to the grave with them. Save it for the living. It's your duty as master."

When the wind picks up even more Alec turns to Cookie (James Hayter) and asks if he thinks the ship can stand the coming storm. Cookie tells him the ship could make it no matter what, "if you lightened her."

All eyes on Alec

"It's time," Alec declares before taking the only decision that makes any sense. The most monstrous decision of all.

"There will be no volunteers."

"It will not be women and children first. The weaklings must go."

Abandon Ship is quite naturally most often compared to Alfred Hitchcock's Lifeboat (1944). The setting is the same.

But there are differences. There are many fewer people on Hitchcock's lifeboat and one of them is a Nazi. A pretty natural villain. Lifeboat features debate over both humanity of and towards Walter Slezak's Nazi captain. We get to know each of its handful of characters very well as they bicker among one another. Love matches are even born of the situation.

Abandon Ship features no Nazi. You can only get so angry at an exploded mine. But anger is natural for the situation and so it is heaped upon one of their own. Who better than the man in command, Tyrone Power's Alec.

While we do get to know a little something about most of the people under Alec's command, and if you pay attention you'll notice there are so many that a few go entirely overlooked, it's only the barest bits of fact. More traits than facts actually. We only learn as much about any of them as Alec does. And as Nolan's Kelly tells him, "Alec, don't get to know them too well."

Other than a relatively small handful of poorly delivered lines (ie: "The boy is the future.") Tyrone Power is strong in carrying Abandon Ship, which he must be to make it work. We know he's not a bad man, but a man of circumstance.

Zetterling wore on me a bit, but in between tending to the injured she has her own emotional journey closely tied to Alec's actions. I preferred the other blonde on board, the very sure of herself Edith Middleton (Moira Lister), who's impressed by "Brave Captain" from the time he gives his first orders cutting Major General Barrington (Clive Morton) down to size. Morton is wonderful as the man who was always in command until finding himself in this life threatening situation. The formerly all-powerful doesn't take orders well.

Stephen Boyd's part isn't very big, but as second in command he tries to steer Alec towards the moral right. It's a part you can imagine Alec playing himself had he climbed on board and the Captain had lived. Lloyd Nolan doesn't get a lot of time but he's got some of Abandon Ship's plummest lines that he makes the most of.

Others standouts include Marie Lohr shining as the elderly former opera singer, Mrs. Knudson and Eddie Byrne as the very shady Mr. Faroni--he's one character I would have loved some backstory on!

Written and directed by Richard Sale, Abandon Ship opened in London March 12, 1957 and premiered in New York a little over a month later.

A.H. Weiler in his April 18, 1957 review for The New York Times wrapped up his piece as follows: "Mr. Power, Mr. Sale and their associates may not have created a masterpiece but they have come up with a thoughtful and often gripping drama that mirrors man at his best and worst."

Watch it paired with Lifeboat if you can. I've come to prefer Abandon Ship over the more famous Hitchcock movie after having watched it several times in recent years. I find the stakes are higher and the situations overall tenser in Abandon Ship, though I still love Lifeboat as well.