I noticed a recent and repeated query in my site statistics which seemed worth talking about. A few Google searches led folks to Immortal Ephemera for a better understanding of the ending to One Way Passage (1932).

The William Powell-Kay Francis film aired recently on Turner Classic Movies and airs again on December 15 as part of TCM's tribute to Star of the Month William Powell throughout December. It's also available as a Made to Order DVD from the Warner Archive.

While the category heading on my site may say "Reviews," I don't really consider my Classic Movie articles to be reviews. They are articles. My goal with each article is to hopefully introduce a few people to movies they haven't seen before that I think are well worth making time for (in most cases).

My challenge with each new article is to keep them as spoiler-free as possible all the while writing about as many details of each film and its background as I can. I feel like I've done my job best when the spoilers are actually in there but, wink wink, you don't know they're spoilers unless you've already seen the movie.

I type all that in leading up to the warning that the remainder of this post is nothing but one big spoiler!

If you have yet to see One Way Passage it's time to turn away. I'd love for you to stay on the site so you might be interested in reading the spoiler-free One Way Passage article in anticipation of catching it on TCM December 15. Other items of interest to you might be the mini-site pages for One Way Passage stars William Powell and Kay Francis. Those compile all the info and images found across this site about each of those stars.

But if you are here because you want to know just what the heck the ending of One Way Passage was all about then I humbly invite you to scroll beyond the next image for my layman's interpretation.

Okay, we're talking about the final one minute of the movie. Just prior to that final minute Dan (William Powell) and Joan (Kay Francis) have said their final goodbye. Burke (Warren Hymer) escorts Dan off of the ship to the death house and Joan keeps a stiff upper lip until Dan's out of sight, then faints. Her own death is imminent.

Then we move to the scene of the New Year's Eve date they've planned at Agua Caliente. Auld Lang Syne plays as a faceless mob celebrates but the camera moves quickly over them towards the bar where it then swoops past a somber Skippy (Frank McHugh). He stands by himself over a drink. We pass him to get to two bartenders polishing glasses while talking about how glad they'll be once the hectic night is over.

The bartenders are interrupted as glass shatters. One says, "Hey, look out for those glasses with your elbows," to the other, who replies, "I never touched any glasses."

They both turn inward the shot moving between them to the surface of the bar where two shattered glasses sit, stems crossed, just as Dan and Joan had left them in their first and subsequent meetings.

The glasses then disappear. The bar surface is clean.

The answer is that the ending of One Way Passage is open to interpretation.

Scott O'Brien quotes Kay Francis on the scene in his biography, Kay Francis: I Can't Wait to be Forgotten

"'We made the ending twice,' Kay later said. 'Once the imaginative way, with glasses tinkling before an empty bar, the other with hazy figures standing there .... [they] used the better ending, with its Outward Bound quality" (99).

Here's how I took it:

Both Dan and Joan have kept their appointments with death, but their love for one another is so strong that neither of their souls could rest without keeping their New Year's Eve date. Their spirits met and celebrated their love one last time and this love was so strong that the surrounding flesh beings actually heard the glass crack and saw the broken glass stems crossed. They depart for eternity together.

A bit fantastic, but seems intended since effort was taken to actually show the glasses disappearing.

How about this, with one little difference:

Maybe the bartenders didn't actually see the glass on the bar. Perhaps it's only those who have been privy to Dan and Joan's romance--us, in other words--who see this.

That would mean that the sound of the broken glass could have actually been anything, from another patron breaking glass or even the one bartender breaking it as the other had suggested.

But the sound of broken glass cues us, as audience, that under the circumstances it could have only been one thing which has just happened. That being the previous scenario involving Dan and Joan meeting up in spirit.

I love this possibility because it means we didn't actually see the broken glass but simply had it suggested to us. Yes, I know they showed us the glass, but I think they were only helping us along a little to give the effect.

This basically suggests that the viewer is even more romantic than Dan and Joan, an idea I like a lot.

What did you think? Something different or perhaps a twist on what I saw? 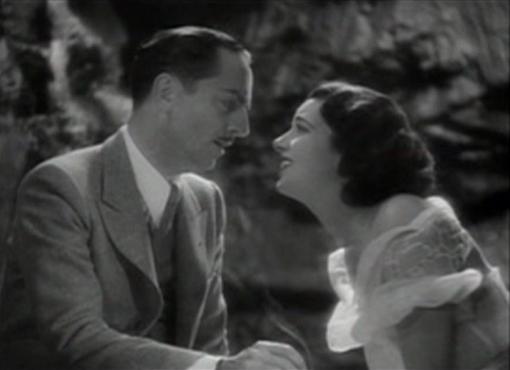