I had the idea for this post when I was digging up information about Alice Brady the other night for my In Old Chicago (1937) review. It became a fun little project the past couple of days because after I located the earlier collectible images I wanted to use to show off these favorites I realized it might be helpful to have an image of each looking their more familiar selves in the 1930's and 40's. I had later collectibles for a handful but most had toppled far enough down in the credits to no longer warrant an appearance in, say a 50-card set , where space is typically reserved for 50 of the biggest stars, so I had to go the screen capture route.

We'll lead off with Alice Brady since she was the inspiration for the post:

Alice Brady above on a circa 1917 Kromo Gravure Trading Card. Brady below is shown with Tyrone Power in a shot from In Old Chicago. You'll also know her from My Man Godfrey (1936) and Young Mr. Lincoln (1939).

Billie Burke is shown above on a vintage postcard at least as old as its' 1908 postmark. Below she's shown on a 1936 Ardath Tobacco Card along with Francis Lederer and Ann Sothern in My American Wife (1936). Besides knowing her as Glinda the Good Witch in The Wizard of Oz, Billie Burke is well-known for her ditzy characterizations in popular classics such as Dinner At Eight (1933), Topper (1937), The Young In Heart (1938), The Man Who Came to Dinner (1942), etc. She's one of the bigger stars on this list, as is our next one, at least they were usually billed! 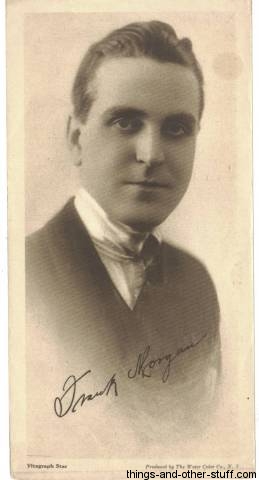 Above is one of those pieces which took me aback as it took awhile for it to click that this Frank Morgan is that Frank Morgan! Morgan is shown above on a paper premium photo issued about 1916 by The Watercolor Company out of New York. Below Morgan, who appeared in Bombshell (1933), The Great Ziegfeld (1936), and The Shop Around the Corner (1940) besides being the Wizard himself in The Wizard of Oz, is shown at a more familiar age on a 4" X 5" Promotional Photo issued by MGM in conjunction with Watkins Mulsified Shampoo.

Francis Ford is a name which might not be immediately familiar to you, but focus on that last name and it should click. The older brother of legendary director John Ford, Francis acted and directed before him but later on became a regular face in John's films. Above he's shown on a circa 1916 MJ Moriarty Playing Card. Below is a look at him in a pretty important, though still unbilled part, as he's being hoisted to a rope alongside Dana Andrews and Anthony Quinn in The Ox-Bow Incident (1943). Listing his other appearances from the 1930's onward would basically be a John Ford filmography.

Another John Ford regular, even as early as the release of this circa 1919 Ivan B. Nordhem bread label (above), Harry Carey had previously appeared in a few dozen D.W. Griffith shorts. After Griffith, Carey became a popular silent age cowboy star and later one of our more popular Golden Age character actors. We actually have a full profile of Carey elsewhere on the site. Below he's shown in a screen capture from Mr. Smith Goes to Washington (1939):

Above is another regular, this time for Preston Sturges. That's Robert Warwick up above on another circa 1917 Kromo Gravure trading card and down below in a screen capture from Sullivan's Travels (1941) with Joel McCrea and fellow character actor favorite Porter Hall in the background. I believe Warwick has just finished saying, "...but with a little sex in it." Besides Sullivan's Travels you'll see him in films such as A Tale of Two Cities (1935), The Awful Truth (1937), The Private Lives of Elizabeth and Essex (1939), The Sea Hawk (1940), The Lady Eve (1941), and in parts big and small and what seems like practically every other film released during the 1930's and early 40's!

H.B. Warner is shown up above on a circa 1916 MJ Moriarty Playing Card, and oh my, he's actually young! H.B. starred as Jesus Christ in Cecil B. DeMille's 1927 King of Kings and he just kept popping up in everything for the next few decades until his final picture, 1956's The Ten Commandments, also directed by DeMille and released when H.B. was over 80 years old! H.B. Warner appeared in a half dozen Frank Capra movies including It's a Wonderful Life (1946) where he played Mr. Gower, who's just about to box young George Bailey's ears in this shot below:

The woman shown above in her stage days on a 1908 Playing Card actually became a pretty big Hollywood star in the 1930's, past the age of seventy, when she was nominated as Best Actress in Frank Capra's Lady for a Day (1933). May Robson is shown below in that part, Apple Annie, in a still shot with good old Dave the Dude (Warren William).

Gilbert Roland is shown above back in his heartthrob days of the mid-1920's on a De Film trading card. Famously taking his name from screen favorites John Gilbert and Ruth Roland. Gilbert Roland was a leading man during the 1920's, Roland was involved with and married to Constance Bennett at a time Bennett was considered one of the most beautiful women in the world. The dashing Roland would play smaller parts in films such as Juarez (1939), The Sea Hawk (1940), Captain Kidd (1945), Malaya (1949), and The Bad and the Beautiful (1952), just to name a handful of familiar titles, plus a half dozen appearances in the lead as The Cisco Kid in 1946-47. Television work would follow from the 1950's into the very early 80's. Roland is shown below on a 1955 Kane Products trading card, looking more familiar to most than he does in the earlier shot:

Speaking of television we close with Neil Hamilton, shown above on a 1920's era 5x7 fan photo. Hamilton rose to prominence in D.W. Griffith's The White Rose (1923) and then was leading man in two of Griffith's following films, both 1924, Isn't Life Wonderful and America. But I think we all know that he's best remembered from the 60's small screen where he played Commissioner Gordon in the Batman television series:

I'm sure we'll have more character actors in future posts, likely tucked inside reviews like I did for Alice Brady in the In Old Chicago piece. The ten selected for this page aren't necessarily my favorites, though some are, they just happen to be the ones whose faces I see the most when collectibles from the 1910's and 20's come in. Feel free to discuss them or any of you other favorites below!