You are here: Home / Archives for H.B. Warner 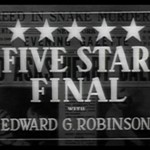 America wondered “Who Killed Jenny Wren?” and RKO’s The Phantom of Crestwood revealed the answer in the first movie-radio tie-in. Starring Ricardo Cortez and Karen Morley with a large cast of familiar character actors and former silent stars in support.

Ten popular character actors from the Golden Age of the 1930’s and beyond are shown here on collectibles from their earlier days on the stage and silent screen of the 1910’s and 1920’s.