You are here: Home / News - Notes / Coverage of The Stratton Story inside The Sporting News

When talking about magazine collecting I've always stressed my greatest joy coming when I discover remarkable content inside previously unremarkable issues.  That happened this week when I was listing some issues of The Sporting News for sale and reached the December 1, 1938 issue, in which I saw this headline: 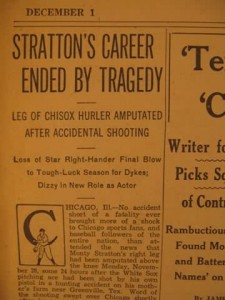 If you're a casual or non-baseball fan, the name Monty Stratton might not mean anything to you, but the story springing from this terrible accident was big enough that Jimmy Stewart would be playing the ballplayer in the 1949 MGM Picture, The Stratton Story.  There are only so many classic baseball flicks, The Pride of the Yankees (1942) and The Winning Team (1952) come immediately to mind, and The Stratton Story was one of those I grew up on.

The film follows Stratton's rise to the bigs, the accident that our Sporting News issue covers, and his subsequent comeback.  An "A" picture with Stewart in the lead, June Allyson as his wife, Agnes Moorehead as Stratton's mother, Frank Morgan, plus Jimmy Dykes and Bill Dickey.  Directed by Sam Wood, who also directed the aforementioned The Pride of the Yankees, The Stratton Story was a hit at its release.  It's 2006 DVD release earned an immediate spot in my collection and assures a generation of new fans for this classic.

Chicago, Ill--No accident short of a fatality ever brought more of a shock to Chicago sports fans, and baseball followers of the entire nation, than attended the news that Monty Stratton's right leg had been amputated above the knee Monday, November 28, some 24 hours after the White Sox pitching ace had been shot by his own pistol in a hunting accident on his mother's farm near Greenvill, Tex.  Word of the shooting swept over Chicago shortly after he was taken to a Dallas hispital late Sunday afternoon.  But Chicago fans had followed a series of accidents to Stratton, each time seeing him fight back to efficiency.  Many thought, perhaps, that he would fight back from this misfortune.

But such optimism was dissipated at 5 o'clock, Monday afternoon, when word was flashed to Chicago that Monty was in an operating room.  He was under an anesthetic.  His leg was being amputated to save his life.  At 5:20 o'clock, he was back in his hospital room, his brilliant, though comparatively brief, baseball career at an end.  Hope for Monty's life was expressed, though his survival was by no means assured.

...Stratton took his automatic and went from his mother's home with the promise he'd bring back some rabbits, or, failing in that, would at least get some practice in marksmanship in a nearby woods.  He was walking about a half mile from the house, the pistol in a belt holster, where he had replaced it after taking a shot at a rabbit.  As he walked along in a thicket the firearm was discharged, the bullet entering below his hip and lodging near his knee.

Stratton crawled to a private road leading to his mother's home, and from a distance of 250 yards, managed to attract the attention of his wife, Ethel, by shouting and waving his arms.  Mrs. Stratton rushed to her husband in an auto and picked him up.  As soon as possible thereafter he was rushed to the St. Paul Hospital where it was found his condition was greatly complicated by loss of blood.

The article accounts of the series of misfortunes Stratton suffered throughout his career culminating in the amputation of his leg:

The Stratton Story on Amazon.com

Despite all this misfortune, Stratton managed to compile an excellent 36-23 record in his short career with all but one of those wins coming in the three years chronicled above.  In fact, Stratton won 15 games in each 1937 and '38, hanging around long enough when he did pitch to figure in decisions in all but 4 starts.  He posted a career 3.71 ERA, well below league average during this hitter's era, and an outstanding league leading WHIP of 1.08 in 1937.  Stratton finished 15th in the MVP voting in 1938, prior to his accident, during his age 26 season.