Quite possibly most familiar to my generation from the heavy Nick-at-Nite run given to the eight seasons of The Donna Reed Show (1958-1966) several years back, even if that's been yanked, Donna Reed will always show up on TV once or twice per year as Mary Bailey in It's a Wonderful Life (1946). Myrna Loy has always been characterized as the perfect wife, but Donna Reed had to be the most wholesome.

Born Donna Belle Mullenger on this date in 1921 in Denison, Iowa, she would win a beauty prize, move to LA, get some stage work, and eventually make her film debut in 1941's The Get-Away after being found by an MGM talent scout. Speaking of Myrna Loy, Donna Reed would show up next in a supporting role in Shadow of the Thin Man (1941), the fourth film of that series. Besides It's a Wonderful Life, Donna Reed has the luxury of yet another role assuring film immortality, that of the prostitute in 1953's From Here to Eternity based on the hugely selling James Jones novel of the same name.

David Thompson, in his The New Biographical Dictionary of Film

uses Donna Reed for one of his more amusing write-ups:

I have a soft spot for this lovely lady, since she it was who first impressed upon me the trade of whoring (740).

Thompson discusses how Hollywood of the 1950's necessitated the polite whore and mentions how much better this could have been if filmed in the 1930's. Referring to the 50's Thompson writes, "...sexy ladies in movies were often overdressed, tight-lipped, and genteel," to which he adds, "A proof of this was the fact that Donna Reed should ever have been playing a whore. She was so plainly decent, wholesome, and romantic that Harry Cohn's personal casting of her ... bespeaks the system's inhibition. So perhaps Donna Reed was only a twelve-year-old's whore..." 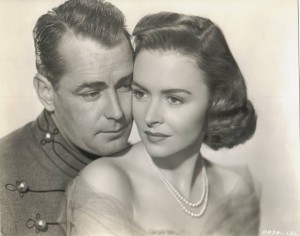 Beyond Glory with Alan Ladd

So who's your Donna Reed? Young supportive Mary Bailey of It's a Wonderful Life, the polite prostitute of From Here to Eternity, or perhaps Mary Bailey all grown up on TV as Donna Stone in The Donna Reed Show? Maybe another role even, whatever the case, feel free to discuss the life and career of Donna Reed below.