The Mad Doctor of Market Street shows some promise, especially during its start, but torpedoes most of its intrigue through the over-the-top comedy efforts of Nat Pendleton and Una Merkel. Which of the two is more annoying is up for debate, but I’ll take Merkel. Despite her top billing, presumably awarded by contractual dictate, the true leading lady in The Mad Doctor of Market Street is Claire Dodd, who gets to do a lot more than usual in this, one of her final screen roles. Dodd is capable in her part, though nothing more.

While many will seek out The Mad Doctor of Market Street because of director Joseph H. Lewis, who soon began piling up minor gems, such as My Name Is Julia Ross (1945), Gun Crazy (1950), The Big Combo (1955), and Terror in a Texas Town (1958), I thought Lionel Atwill stood out more than any directorial touches. In addition to being equipped with more talent and experience than a production like this called for, Atwill manages to bring every bit of his usual energy and enthusiasm to a familiar mad doctor role that wouldn’t be worth remembering if not for his contribution. 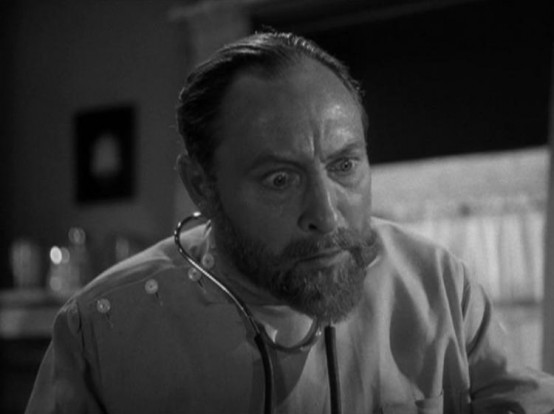 Atwill plays pseudoscientist Ralph Benson, described by one medical man as a self-appointed doctor who's been piling up complaints. The Mad Doctor of Market Street opens when a desperate man (Hardie Albright) reluctantly comes to Benson and consents to be his guinea pig in exchange for a thousand dollars that never leaves Benson’s wallet. Benson is decades ahead of his time in experimenting with suspended animation, but despite the notoriety this has brought him within the medical profession his initial goals are entirely noble. He touts his experiments as key to wiping out disease and lengthening the human lifespan. After killing his volunteer and fleeing on a ship that sinks in the South Seas, Benson resurfaces as one of several castaways captured by natives on an otherwise uninhabited island. Benson immediately distinguishes himself and temporarily saves the captives from being burned alive by using his medical trickery to bring a native woman back from the dead. Declared “god of life” by the natives, Benson’s goals have been perverted:

“I’ll be the greatest man who ever set foot on this earth. All will honor my name.”

I’m not sure anyone but Lionel Atwill could say this with a straight face. Actually, straight face goes too far because by this time Atwill is so absorbed into his character that his sharp features take on what had by then become his familiar intense mask of insanity. His eyes gleam and bulge, while his mouth twists into inappropriate smiles. He's a madman basking under the glow of the power he's always felt he deserved. You can tell Benson believes in his higher nature when in a casual conversation with the native woman Tanao, who he has brought back from the dead, he explains, “Some day because of me there will be no death. That’s why I must go on with my great work.”

Above: Atwill in disguise. Notice the lack of beard.

The other castaways are Dodd as Patricia Wentworth; Merkel as her aunt, Margaret; Pendleton as dimwitted boxer Red; John Eldredge as cowardly ship’s officer Dwight (I love the look Atwill gives Eldredge as he cowers behind him when the natives come to take them to the fire. For all that Atwill’s Benson has seen, this lack of courage seems to fascinate him more than anything else that happens in the movie!); finally, Richard Davies plays lowly ship’s steward Jim, who develops into love interest to Dodd and hero of the island by virtue of his quick thinking and background as a medical student.

I’m probably stretching it by calling the natives a pleasant surprise, but compared to similar features of the period, that’s just what they are. They’re not here for laughs, they are the threat, but even so, it is Atwill’s Benson who always remains the villain in The Mad Doctor of Market Street. What the natives have going for them is logic and consistency. When Barab (Ray Mala) spots the captives and returns to tell the Chief (Noble Johnson), there is sound reason for the planned course of action: “White man bring evil spirits,” the Chief says. He explains, “Every time traders come people die. They go in fire. Get white man.” Benson, of all people, redeems the white man with a well timed shot of adrenaline that saves the Chief’s wife, Tanao (Rosina Galli), and gives the appearance of his having raised the dead.

The Chief declares, “You god of life. We your slaves.”

Above: The natives, led by Noble Johnson, confront Atwill on his wedding day.

Benson’s new power goes straight to his head. He explains to his fellow castaways, “There’s only one law here at present, and that’s mine.” But the natives belief in their newfound god is a fickle one, and Benson must prove himself anew at every death. After making hero Jim his next subject by introducing him to “the long sleep of death” (another terrific Atwill line), Benson uses the promise of Jim’s resurrection as bait to marry Dodd’s Patricia. During the wedding celebration it becomes obvious that Benson has reneged, so Pendleton and Merkel share one of their better scenes in convincing the natives that unless Jim is buried he’ll “bring evil spirits” to the island. The natives force Benson to prematurely revive Jim, but his awakening further cements Benson’s status. While the natives worship their “god of life” in the moment, it has become clear that Benson’s position will continued to be questioned with every next death.

When the native boy Barab dies in a manner too violent for Benson’s tricks to revive him, the newly established order of the island is shattered. Benson quickly explains that Barab is evil, and if he makes him live again then all of the natives’ children will die. The Chief is smart enough to see through Benson’s ruse and insists that Barab is not evil. Benson will have to perform a miracle by sunup, or the god of life will be thrown into the fire.

Above: Atwill getting a bit nervous.

This is one low budget island story that is not spoiled by the natives, but instead ruined by the insistent attempts at comedy by Nat Pendleton and, especially, Una Merkel. Pendleton isn’t so surprising, as his dopey fighter Red Mitchell is only slightly more punch drunk than any of the other characters he’d been playing ever since his peak in The Thin Man (1934). In addition to her several lovable second leads, Una Merkel had played her fair share of shrill comedic characters, but her Aunt Margaret has to be the most painful I’ve come across. She manages one or two decent lines, but she talks so much that any highpoint is easily forgotten. The Mad Doctor of Market Street would have taken on a tone more in line with Atwill’s dedicated, if hammy, portrayal, and improved by leaps and bounds, had these two been totally cut out of the script.

An original written for the screen by Al Martin under the title Terror of the South Seas, the film went into production in July 1941 as Terror of the Islands. There is some speculation that the opening scene on Market Street was filmed as an afterthought, and that its addition explains why the movie was eventually released as The Mad Doctor of Market Street. It premiered February 27, 1942 (Weaver).

Given that timing, as well as the scene at sea, it is surprising that The Mad Doctor of Market Street makes no reference whatsoever to the war. Though it’s hard to think the movie would have been a total escape from real life headlines when it featured Lionel Atwill as a mad dictator who happily accepts his position as god of life with plans of being the greatest man in earth’s history. That may have rung some bells in '42.

The Mad Doctor of Market Street is worthwhile for Atwill fans and, by extension, horror fans, who should at least appreciate the genre icon even if any true scares are missing. Lewis fans will find the touches they’re looking for as well, some of which are hinted at in the screen captures featuring Atwill on this page. For a comprehensive look at the common elements and techniques running throughout Lewis’s career be sure to see Michael E. Grost’s webpage.

After the shipwrecked passengers are captured Una Merkel’s Aunt Margaret says, “Can’t complain about a lack of excitement. A murder mystery, a shipwreck, and now we’re the prisoners of a bunch of savages.” That had been my feeling until we reached the island. But suddenly the darkness of Market Street and the violent voyage at sea feels as though it has given way to an episode of Gilligan’s Island. At least it was an episode that cast its scientist as an egotistical madman.

Above: A thought occurs to Atwill.

. It had previously been available as part of a Vault Collection set with four other horror titles, but it appears that it's gone out of print

Above: Claire Dodd, just because.

It's All Atwill as a Psycho Pseudo- scientist

Lionel Atwill works to overcome the comedic sabotage of Nat Pendleton and Una Merkel in this minor Universal horror entry from early 1942. Claire Dodd features as leading lady late in her career with Richard Davies opposite her as romantic interest. Some touches for fans of director Joseph H. Lewis, but this is earlier than his better known films.