I’ll admit that John Gilbert appeared in better talkies, but I don’t enjoy any of them more than I do Gentleman’s Fate. That statement says more for Gilbert's speaking roles than most histories do, but the actor's later work continues to grow in popularity as it becomes more easily available for viewing. Several of my past posts have proved my affinity for early gangster and crime films, but Gentleman’s Fate is a bit of a flop as a mobster movie. What I enjoy most is the interaction between two very different actors, former idol of the silent screen Gilbert and the gruff character actor Louis Wolheim, who had died by the time Gentleman’s Fate was released.

I’m especially attracted to the portrayal by Wolheim, who gives voice to the mobster type he previously played to great effect silently in The Racket (1928), but it is his character’s relationship with Gilbert’s, that turns out to be the heart of this movie.

In November 1930, MGM borrowed Mervyn LeRoy to direct Gentleman's Fate shortly after he had completed work on Little Caesar for his home studio, Warner Bros. While Little Caesar focused on the rise of one megalomaniac crime lord, Gentleman’s Fate used a gangland background to tell the story of two very different brothers separated since birth, but brought together by their father’s deathbed wish to see his youngest son again.

Above: Leila Hyams with a happy John Gilbert at the start of Gentleman's Fate

Jack Thomas (John Gilbert) is a dashing young playboy ready to settle down with the girl he loves (Leila Hyams) when a phone call from his guardian (Paul Porcasi) changes his life.

Jack discovers that he’s not Jack Thomas, but Giacomo Tomasulo and that his father, presumed long dead, was still alive but clinging to life at the Ritzi Hotel with hopes of being reunited with his son before the bullet in him kills him.

His guardian warns Jack that there is even more to his story, but that he’ll have to find it out for himself. A dismayed Jack arrives at the Ritzi and meets older brother, Frank Tomasulo (Louis Wolheim), who bluntly informs Jack, or Giacomo, that the family business is the illegal liquor business: “We run a string of booze trucks from Montreal to here,” with here being Jersey City. Each man can see that they have nothing in common with their brother and Frank rather decently offers Giacomo a buyout of $50,000, for starters, to go off and marry his “goil” and live his own life. Frank’s only concern is that Giacomo treat their father right and fulfill hopes for a happy reunion. Giacomo, our gentleman, had no other intention.

The meeting between father and son goes well and Papa Tomasulo (Frank Reicher) makes a gift of an emerald necklace for Giacomo to give to his fiancé. Marjorie is thrilled with the necklace and doesn’t balk too very much when Jack explains that he’ll have to go out of town for a week. Frank has requested he come stay at the Ritzi in case their father calls for him. Jack keeps his newly discovered background from Marjorie with hopes that it will all blow over with his father's imminent death and he can return to her and the life they have planned. Jack leaves Marjorie puzzled when he gives her an emergency phone number with instructions to ask for Giacomo Tomasulo if she has to call.

Marjorie is forced to call when she discovers that the necklace Jack had given her was stolen from a society acquaintance. Brother Frank has Marjorie come to them and explains to Giacomo that he has to take the fall for stealing the necklace. “If you don’t take the rap, your old man’s going to take it.”

Above: All is revealed to Leila Hyams as John Gilbert tries to protect her from Louis Wolheim.

Jack doesn’t realize yet, but this spells the end of his relationship with Marjorie in addition to the prison sentence he faces for taking the rap. Giacomo’s sentence is shortened to just ten days because of Frank’s behind-the-scenes maneuvering but he returns to the Ritzi to find that his father has died during the time of his incarceration. He’s even missed the funeral.

Up until now Wolheim’s Frank appears to be the villain of Gentleman’s Fate, but Giacomo has returned to have a promised showdown with him and the brawl winds up earning big brother’s respect.

“You sure can put up a fight, boy,” Frank tells him. “I guess maybe gentleman ain’t so bad. I just never understood one before, that’s all.”

“You’re not so bad yourself,” Giacomo replies.

Frank delivers a note from Marjorie to Giacomo and the news isn’t good. Overwhelmed and confused Jack Thomas seals his fate as Giacomo Tomasulo by agreeing to come into the family business with Frank.

Frank offers him the Canadian end of the business because, “You’ve got a front and you talk like a gentleman.”

“Quit that," says Frank, reassuring his brother. "You’re a gentleman now and you always will be one.”

Above: John Gilbert and Louis Wolheim

Gentleman’s Fate distinguishes itself with the more complicated than expected relationship between the brothers. Gilbert’s Giacomo never entirely loses Jack Thomas as he dips into the underworld, leaving Wolheim’s Frank the more interesting character. Frank is a brute, but despite exterior appearances he is never anything but supportive of Giacomo as a family member, even before younger brother earned his respect during their fight. While Frank forces Giacomo to take a fall over the emerald necklace, he does so only to protect the true guilty party, their dying father. Once their father is gone and Giacomo has done the family right by taking blame for the theft, Frank is entirely devoted to Giacomo.

While the dynamic between the brothers is what carries Gentleman’s Fate the movie suffers from an ineffectual rival, with John Miljan’s Florio never seeming to stand a chance against the Tomasulo family, and an awkward ending that leaves viewers on a down note and commits the sin of moralizing while doing so. 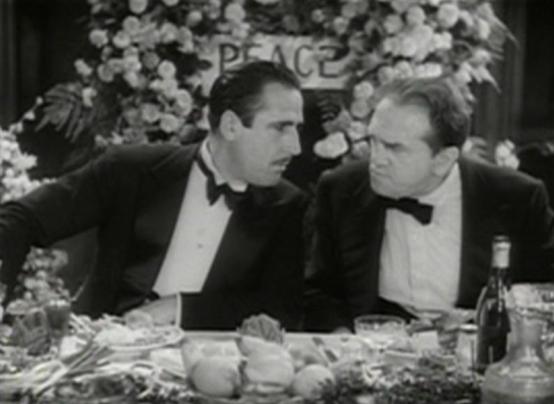 Above: John Miljan and Louis Wolheim at the Peace Banquet.

An interesting romance buds towards the end of the film when rebounding Giacomo falls for Ruth Corrigan (Anita Page), a common gun moll by virtue of environment but in reality an insecure young woman who is quickly swept off her feet by Giacomo. His initial attraction is simply Ruth's head of blonde hair reminding him of lost love Marjorie.

Above: John Gilbert and Anita Page

, but it has gained in reputation in recent years just by virtue of being seen. Fountain is a bit sensitive to select reviews and some of the tempered praise that she took as backhanded talk of a Gilbert comeback, implications being that the mighty had fallen. While I ran into a few negative reviews and, yes, even more articles referring to Gilbert’s difficulties in adjusting to sound films, I was pleasantly surprised to find just as much positive discussion of Gentleman’s Fate in the period press. Lavish praise came from top fan magazine, Photoplay, which gushed, “My, but we are happy again. This picture proves, to the nth degree, that Jack Gilbert needs only the right story and direction to have all his old appeal.” (54).

Additionally, Photoplay named the film one of its “Best Pictures of the Month” in that March 1931 issue, alongside titles such as Trader Horn and Chaplin’s City Lights. It also drew attention to both Gilbert and Louis Wolheim in naming them among the “Best Performances of the Month.”

Above: Louis Wolheim, "...Giacomo does look a little bit like me, don’t he?”

Another fan magazine, New Movie Magazine was unimpressed. While they praised the work of Louis Wolheim they also took time to rip Gilbert with reviewer Frederick James Smith writing, “It is unpleasant to report that Gilbert continues to be colorless.” This, more than any negative appraisal of Gilbert’s voice, is a point I can understand, even if I disagree. Gilbert as Giacomo is at the disadvantage of Wolheim, who plays the far more colorful brother. While Giacomo commits actions which take him down the same path as Frank, the Gilbert character never cedes any of the manner that imbues him at the start of Gentleman’s Fate. He always remains the gentleman without any hint of deviousness. Gentleman aren't very exciting by nature and thus the character lacks color, but Gilbert plays him fine.

Gentleman’s Fate was based on a story by Ursula Parrott, who had previously written the source material for MGM’s Norma Shearer-hit The Divorcee (1930). Parrott’s story was serialized in the March through July 1931

issues of Household magazine, thus hitting the newsstands at about the same time as the March 1931 release of the film.

Above: George Cooper and Marie Prevost serve as comedy relief in Gentleman's Fate. Prevost had previously had a much larger role opposite Wolheim in 1928's The Racket. For more about her check out The Marie Prevost Project at She Blogged by Night.

While Downstairs (1932) is probably the best of the John Gilbert talkies, Gentleman's Fate remains my favorite because of the Gilbert-Louis Wolheim tandem. When Gentleman's Fate is a gangster movie it is a bit clumsy, but Gilbert and Wolheim provide a highlight in every scene they share. Anita Page is quite good as well, but the movie is more than halfway over before we get to meet her.

Gentleman's Fate has never been released to home video. Screen captures on this page are taken from a past showing on TCM.

For more about Gentleman's Fate be sure to read Moira Finnie's article at TCM.com.

The stars of Gentleman's Fate in my eBay Store:
(Shop all of my eBay listings here