You are here: Home / Movie Reviews / Charles Laughton stars in The Private Life of Henry VIII (1933)

This is the kind of movie I wish they showed in my high school history classes, but unfortunately Alexander Korda's The Private Life of Henry VIII doesn't actually make for the best history lesson. There's no mention of Henry's part in the Reformation, no specific mention of religion at all in fact, just the presence of Archbishop Thomas Cranmer and other mostly 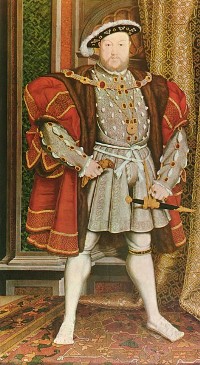 The historical Henry VIII as painting by Holbein

nameless religious figures. That point just makes me toss up my hands and declare Who cares! because such weighty matters aren't Korda's focus, no, the ribald private life of the title is the sole subject of the second film for his London Film Productions. Charles Laughton's portrayal of the 16th century King, famed for his many wives, is so perfect that it rises above the need to nitpick facts or fallacies. Laughton takes the man, wraps himself into his robes and around his legend, and makes history subservient to performance; his Henry VIII is the Henry VIII I want to remember. The Private Life of Henry VIII is not documentary but it's damn entertaining.

It is largely Laughton's domineering performance which gives the perception of The Private Life of Henry VIII being a much bigger production than it actually is. Even with an infusion of money from United Artists, who'd buy rights to distribute the film first in America and shortly after in Britain, Korda was limited to filming on a handful of cheaply constructed sets and his actors would wear the same costumes throughout the movie. But beyond Laughton's lordly performance Korda expertly enhances Henry's size as well by filling the few interior settings with a procession of colorful characters, most notably each of Henry's wives, and mixing in a handful of exterior shots such as the execution scenes which are packed with extras to lend greater scope. 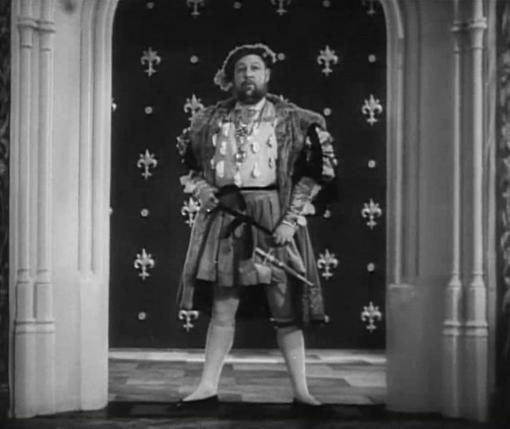 ... And Charles Laughton as Henry VIII

But nothing colors Korda's picture more than Laughton's Henry. From his first moment on screen, hands astride hips with his booming voice interrupting the gossiping ladies of his court, there is no doubt about who's in charge. If this man weren't King surely some other would have had his head on the chopping block long before it swelled bigger than his bulging body. His pompous amble demands attention as does his explosive laughter and equally combustible temper. When confronting Katherine Howard (Binnie Barnes) in his opening scene, many years before she's to become his fifth wife, Laughton perfectly conveys Henry's interest with a suggestive flare of his nostrils. He conducts matters of state in between the time Anne Boleyn's head falls and his marriage to Jane Seymour--and the time between the two events is just moments--but his ranting at his inferiors is cut short by Lady Jane's request to see him. He clears the room as she coos to him, the beast seemingly soothed until Jane remarks on the 21 buttons on her dress, one for each year of her life. Henry laughs like an animal, so pleased at his betrothed's youth, and when she falls to his lap foolishly echoing his laughter he practically devours her neck with a carnality the young bride to be surely can't comprehend.

Following the opening credits of The Private Life of Henry VIII is a written message dismissing the story of Henry's first wife, Catherine of Aragon, as "of no particular interest." Besides the boost for both Korda and Laughton's careers, the future Mrs. Korda, Merle Oberon, would also win praise and gain notice for her few minutes on screen as Henry's second wife, Anne Boleyn, who's awaiting execution in the film's opening scene. No sooner does Oberon utter, "What a lovely day," as she peers from the gallows than does Korda cut to Wendy Barrie's Jane Seymour saying the same as she awaits the drums which signify Anne's head has fallen freeing the King for marriage. 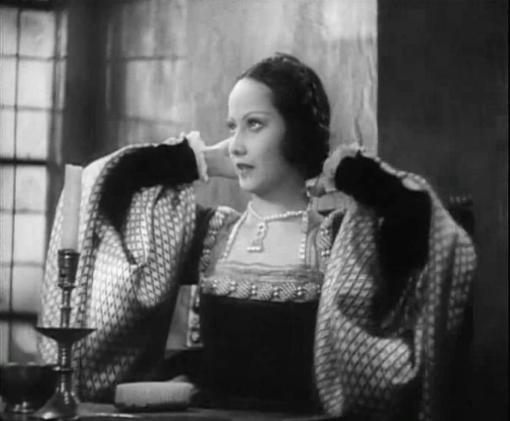 While Jane supplies Henry his male heir, she dies in childbirth, leaving Henry quite contentedly single. He celebrates his gluttony in a memorable scene where he tears into his food, lips smacking, jaws munching, bones being tossed over his shoulder before he finally pauses long enough to ask for a song. The young woman who volunteers is Katherine Howard, recipient of the earlier nostril flare, and at this time the ambitious lover of Henry's courtier, Thomas Culpeper (Robert Donat).  She thrills the King by choosing a song that he himself has authored from which point he has to have her. Binnie Barnes, as Katherine, has the meatiest role of any of Henry's wives, figuring in several scenes with Donat's Culpeper before winding up in Henry's bed. Her fate is sealed early when she tells Culpeper that "Love is not all the world," to which he replies, "It is. Or it is nothing."

But Henry's quest for additional heirs must take a detour for the sake of the state prior to Katherine Howard's rise to prominence and that's through a marriage of convenience with German Anne of Cleves, his fourth wife, played delightfully by Laughton's own real-life wife, Elsa Lanchester. While the fate of Europe hinges on the successful union of Henry and Anne, Anne has fallen for the man who's come to retrieve her to England, Peynell (John Loder). Thus by the time of Henry's first meeting of Anne in the flesh she has decided to make herself as repulsive as possible, stumbling into his presence with makeup heavily applied to a face she contorts for his benefit. As Henry readies himself for Anne's bedroom he remarks, "You can take a horse to the water, but you can't make him drink." Inside Anne takes a loud bite out of an apple and charms him with her heavily accented singsong English which grates like fingernails across a blackboard. When Henry suggests that they're not yet married because the relationship hasn't been consummated, Anne replies, "Poor mother told me. First he says the marriage is no good and then he cuts off the head mit an ax chopperrrr, " rolling that r for some time. Lanchester is a such a treat that we're happy that she cuts a deal with Henry and departs with her head still on her shoulders in order to return for a later scene. 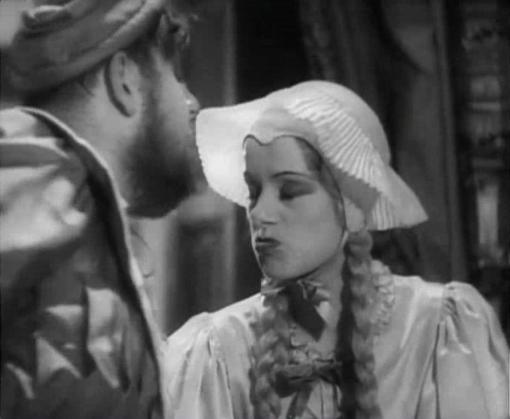 But it's with Binnie Barnes' Katherine Howard that many of Henry's idiosyncrasies and general megalomania are largely kept at bay by love. He's shown ordering the cancellation of executions in one scene and in another practically kills himself when taking on a court wrestler after Katherine dares to suggest his days as the strongest man in the world are behind him. Henry's not a new man, but one evolved, and you can tell he'll be quite happy growing to old age with his younger bride by his side, his appetites finally placated by the woman who is his ideal. But trouble is foreshadowed by the written note Korda interjects prior to their marriage scenes stating that "Katherine was happy with her crown. Henry was happy with his Katherine." It could never be a level playing field for Henry as long as his otherwise faithful Culpeper is on the scene.

To date Thomas Culpeper was Robert Donat's largest role, and he's yet another star made through Henry VIII. Culpeper is first shown as the King's sycophant and then away from Henry he takes on some of the King's boisterous personality. Donat seems on his way to being forgettable before his scene with Barnes' Katherine where they discuss love. For the most part however sympathy for the Culpeper character hinges on the actions of Katherine Howard. As Katherine leaves him behind to ascend to the throne, Culpeper remains loyal but intensely jealous. But when Katherine tires of Henry and airs her regrets to Culpeper he as good as earns his eventual fate by returning her affections. Somehow, and this points all the more to Laughton's mastery, the sympathy has returned to the cuckolded Henry.

Binnie Barnes in the same set

Charles Laughton won the 1934 Academy Award for Best Actor for his portrayal of Henry VIII, and despite Paul Muni's nomination for his performance in I Am a Fugitive from a Chain Gang (1932), I won't argue with the selection. Thereafter Laughton cemented his reputation with an impression run of films throughout the 1930's including the patriarch in The Barretts of Wimpole Street (1934), the title butler in Ruggles of Red Gap (1935), the notorious Captain Bligh in Mutiny on the Bounty (1935), and finally in his best remembered role, his sensitive portrayal of Quasimodo in The Hunchback of Notre Dame (1939), all early milestones towards the start of an impressive career which would continue until his death in 1962.

The Private Life of Henry VIII was also a Best Picture nominee, the first ever made outside of the United States, joining other better remembered classics such as 42nd Street (1933), Lady for a Day (1933), Little Women (1933), and Chain Gang itself, at the loser's table as Fox captured the big Award plus two others for Frank Lloyd's Calvalcade (1933). Perhaps more important than its critical success were the box office numbers for The Private Life of Henry VIII as it grossed over half a million dollars in America alone and would energize the entire British film industry both at home and abroad.

The Private Life of Henry VIII is another public domain film hosted online by the Internet Archive.  The entire movie is embedded immediately below:

Leave a Reply to The Private Life of Henry VIII (1933) Review, with Charles Laughton and Elsa Lanchester – Pre-Code.Com Cancel reply