I had been preparing to write about Midnight Taxi (1937), starring Brian Donlevy, Frances Drake and Alan Dinehart, when I decided to take a few moments to learn a little more about one of my favorite character actors, Harold Huber, who plays a rather important role in the beginning of the film.

I was going to jam a paragraph about Huber into the middle of my coming Midnight Taxi article, but then I discovered I had already typed the thousand or so words which follow. Since we have no space limitations Mr. Huber easily earns his own post!

The legendary journalist Ernie Pyle went hunting for Harold Huber at the 20th Century-Fox studios in 1938, claiming that he wasn’t even entirely sure of his name before he found him.

“I know you have seen this fellow in the movies. You couldn’t help it. Seems as if he’s in practically every movie you go to,” writes Pyle by way of introduction to Huber before describing his screen persona as “a sort of assistant gangster … mighty tough-looking in an Al Capone way.”

It’s impossible not to think of Capone when you see Harold Huber. Huber is the early ‘30s screen gangster with a very noticeable scar across his face. Being all too willing to confuse actors with their parts I’d always imagined some tough in a homburg tracking down Huber and slashing his cheek with a jagged piece of glass as punishment for loose lips.

I never had such thoughts when it came to George Macready’s scar. Oh sure, I let my imagination get carried away, but I always tabbed Macready as the type who wouldn’t talk, basically chalking his scar up to the exact opposite reasons I attributed to Huber’s mishap.

Macready is debonair; Huber is a weasel.

Yes, Ernie Pyle was right. You’ve seen Harold Huber several times: He’s the aptly named Scarlatti in The Match King (1932); he’s over ambitious Joe in The Mayor of Hell (1933); as Nunheim in The Thin Man (1934) he enjoys the crowning glory of his weaselly type in an honest to goodness classic; He shows up late to give a tough time to teens Rooney, Cooper and Bartholomew and briefly turn The Devil Is a Sissy (1936) into a gangster flick.

He gets off to an important start in Midnight Taxi, as Alan Dinehart’s top delivery man, a sleazy sort who goes by the name of Lucky, before pushing his luck too far. Two-faced would best describe Huber in Midnight Taxi, and two-faced never gets Huber’s characters very deep into his films.

Of all the character types I’ve bumped into in 1930s Hollywood, I’d say a Harold Huber gangster would be the one I’m least likely to trust. This guy is just going to flip on you at some point.

His image softens some by the later ‘30s as his gangsters take on a more comic touch. He even has the opportunity to play on the right side of the law, most notably in four Charlie Chan films, two apiece with Warner Oland and Sidney Toler in the title role. I haven’t made it to the Charlie Chan series yet, but by the time of Columbia’s Crime Doctor (1943) Huber was back to his old tricks, hanging around with John Litel and plotting evil things for Warner Baxter. He’s especially snivelly in that one!

Hollywood columnist Paul Harrison provided me with a reality check in a 1941 column in which he claims that Huber’s scar came as result of a fencing accident. (And, P.S. Macready’s came in a car accident). Since Harold Huberman is spotted in a late 1928 newspaper as former captain of the Townsend Harris fencing team, representing N.Y.U. in foils competition by that time, I guess I’m going to have to believe this. And yep. I said N.Y.U.

Our cowardly, usually none too bright, assistant mobster of the screen is credited with being a bit of a genius in real life. Born Harold Joseph Huberman in the Bronx, December 1909, to parents who had both immigrated from Russia at a very early age, Harold Huber was reported to have majored in languages at N.Y.U., where he graduated at age 19.

His Hollywood biography then has Huber taking three years law at Columbia University, though Huber’s personal time line makes the Columbia bit extremely suspect. If he was fencing at N.Y.U. in 1929, at age 19, and on Broadway by 1930; Hollywood by 1932, he’d have been an extremely busy young man! 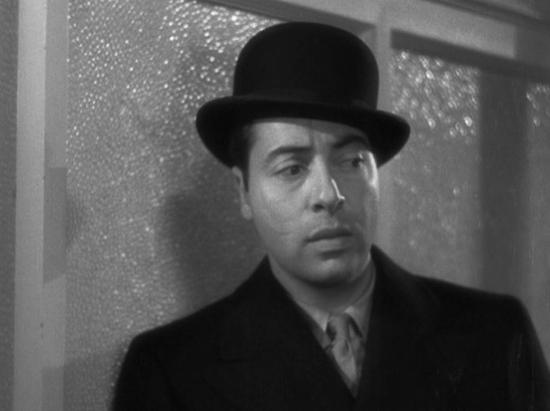 Harold Huber as Nunheim in THE THIN MAN

It was also often repeated that Harold Huber spoke a number of languages. Ernie Pyle wrote it was five, while later coverage of Huber more specifically claimed that he spoke French, Spanish, Italian and could read Latin and Sanskrit.

No matter how extensive his schooling, Huber had the acting bug. According to Harrison, Huber supposedly bluffed his way into producer Al Woods’ office and after regaling Woods with a list of imaginary credits, Woods—”not fooled, but amused,” Harrison reports—gave him a bit in A Farewell to Arms on Broadway and soon moved him up to a supporting comic role.

Hard to believe Harold Huber is not quite 23 years old here, in THE MATCH KING with Warren William

Huber had a brief blitz of early Broadway credits: 4 roles between 1930 and ‘32. Besides his Hemingway debut he also had a part in Two Seconds, which would soon be adapted for the screen with Edward G. Robinson giving one of his most unforgettable performances in the leading role. Robinson was already in Hollywood by the time of the play though and while Preston Foster would appear in both versions of Two Seconds, Huber’s part of the sleazy dance hall manager would be played on screen by J. Carrol Naish.

While Two Seconds did release the same year Huber arrived in Hollywood, 1932, it came out months before Huber began work in his first billed part, in Central Park.*

*The IMDb lists Huber as previously having an uncredited bit as a convict in Columbia’s The Criminal Code (1931).

Harold Huber appeared in almost 90 films between the time of Central Park and Crime Doctor, 1932-1943. He’d next head back east where he produced and starred in the “Mystery of the Week” radio program, making a bit of name for himself all over again playing Agatha Christie’s famed Belgian detective Hercule Poirot on what would soon be a nationally broadcast show. In a 1946 interview Huber said he was glad of the role because after his film career he felt he was “just a little too typed.”

1950 was a good year for Harold Huber as he appeared in two films, My Friend Irma Goes West and Let’s Dance, and also had his own television series, I Cover Times Square. Huber had a few additional television guest appearances throughout the decade and kept busy in the local theater.

Huber, once more, with Cagney in THE MAYOR OF HELL

He was a few months shy of his fiftieth birthday when he died either during or following a minor operation, September 29, 1959. Harold Huber was survived by his wife, Ethel, and one daughter, Margaret, born circa 1939.