I picked up the new pre-code collection of films being offered by Universal from the Paramount vaults and managed to sit down and give one a try this past afternoon.  I'm much more conditioned to Warner's, and to a lesser degree MGM's, pre-code output, so I was curious to see how another studio conducted itself during the period.  At this point, mind you just 1 down, 5 to go in this box set, Paramount's got some ground to make-up.

I debated starting out with either Murder at the Vanities (1934) or Search for Beauty (1934) as I'd read good things about both, so deciding I wasn't really in the mood for a musical I (hopefully) made the mistake of going with the latter.

Top billed in Search for Beauty are a pair of youngsters playing Olympic champions who would both go on to greater film fame, Ida Lupino, later the female lead in all the top Warner's films missing Bette Davis, and Larry "Buster" Crabbe, an actual 1932 Olympic Gold Medalist who is most associated with playing both Flash Gordon and Buck Rogers a little later on.

The actual stars of the picture are King Kong's (1933) Robert Armstrong, character actor James Gleason, and Gertrude Michael who you may remember from Cleopatra (1934).  Also featured here, and somehow billed ahead of Gertrude Michael, is Toby Wing.

You often hear how some of the more famous pre-code films, Three on a Match (1932) and Red-Headed Woman (1932) spring to mind as examples, were actually intended at original release as women's pictures.  That being so, Search for Beauty then comes off by modern comparison to any low-brow comedy striving for an R-rating by showing as much skin as possible.

They say Search for Beauty couldn't have been made just a few months later, and while I do agree, at the same time I don't think it would have been a huge loss to film history.

The main point of the picture seemed to be to gather together the American and international beauty winners, put them all in swimsuits, and parade them around in a number which reminded me of some distasteful cross between a very poorly run Busby Berkeley spectacle and a really well run cult.  I somehow managed to keep from skipping past this scene and stared at the beauties instead, several of which from both sexes were a bit on a the chunky side.  The men all donned tight-fitting shorts, the women all went braless with super tight shirts on, as each state or nation's representatives bound past us with camera trained tight on their torsos while they skip by.

Look, reading over this you may think I absolutely despised Search for Beauty, and that's actually not the case.  For one thing I just happen to be immature enough to have chuckled at a few of the jokes.  Also I like Ida Lupino and enjoyed the chance to see her at work so young (just 20 at Search for Beauty's release).  Robert Armstrong basically played Denham from Kong again, here as a fast talking con man publisher.  I don't know if that's a plus, but I've got no problem with Denham.

James Gleason, who I usually like quite a bit, actually bothered me throughout this one.  I was as annoyed as Armstrong's character by his constant parroting of his lines, might have been funny once or twice, but not every time.  Maybe I'm just turned off by his appearing in a skimpy pair of shorts himself at the end of the film, I don't think anyone, save Mrs. Gleason, needed to see that.  That's kind of the point here in regards to Search for Beauty though.  Super-skinny James Gleason in a pair of tight swim trunks is intended to be funny.  I get it, it's ridiculous, but it caught me somewhere between wanting to either look away or stare at the train wreck, all the while wondering who Gleason pissed off at Paramount.

My most pleasant surprise of Search for Beauty was Gertrude Michael, who I enjoyed enough that I look forward to seeing her again in Murder at the Vanities ... despite Search for Beauty.  She was the most natural actor in the movie, better even than this young platinum version of Lupino, and despite a somewhat unusual face was quite attractive in her own way as well.  She actually had the dirtiest part in the picture in terms of executing a double-cross on the innocent kids, Crabbe and Lupino, but pulled it off without you thinking any less of her. 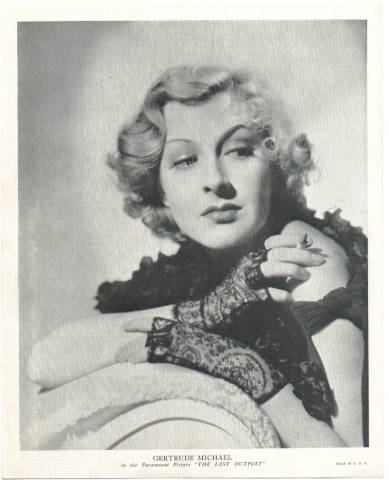 Gertrude Michael is shown on a 1936 R95 black & white premium photo, printed on a paper with a linen-like texture

Right now I'm left thinking of Gertude Michael as another version of what I've come to think of as the Claire Dodd or Helen Vinson type: A somewhat sophisticated 1930's woman who's had a look at life, graduating from our hero's ideal to the woman into whose trap they'll happily fall.  They're not femme fatales by any means, just, well, wily would probably be the best term.

Finally, Toby Wing, well, wow!  This is the first time I'm aware of having had seen her, and I just can't believe she didn't blow up into a star of some caliber or at least a more memorable sex symbol.  She reminded me a little of Alice White.  Her acting wasn't terrible, except I'm still trying to decide if I could have done without those semi-annoying little sex-charged squeals she'd put at the end of sentences.  And I have to admit I couldn't pry my eyes away from the screen when she stripped off a layer of clothes and jumped up on a table to dance for the band of perverts Armstrong and Gleason had assembled into Crabbe and Lupino's health clinic.  After her cousin, played by Lupino, bumps Toby out the door Ida does her own little table dance as well.

So can you see why I expected more?  Sure, Search for Beauty is sinful, but it's little else.  While it's got plenty of what you think of when you think of pre-code I really didn't care too much about what happened to any of the characters, except maybe Gertude Michael's.  The final resolution isn't really much more than good triumphing over kinda bad in a weak story.  It closes with James Gleason bending over, sticking out his backside for Robert Armstrong and the words "The End" then being plastered across it.

By the way, if you're buying this set and looking forward to the advertised documentary, Forbidden Film: The Production Code Era, well, don't. It's good, yes, but it's also only about ten minutes long.

Have you seen Search for Beauty?  If you've got something to add please feel free to leave your comments below.