Up first at 6 am (all times are EST) is the part which brought ten-year-old Freddie Bartholomew to America, the Dickens classic David Copperfield (1935) which featured the young star in the title role for the first half of the film before giving way to Frank Lawton as Copperfield aged into a young man. I wrote about MGM's David Copperfield HERE.

Next, at 8:15 am, is the little shown The Devil Is a Sissy (1936) featuring Freddie with fellow child stars Mickey Rooney and Jackie Cooper. This one is a blast, one of my favorite Freddie Bartholomew movies and I urge you to at least record it if it's airing too early for you--in fact, I put out this post 24 hours ahead my normal schedule for the main purpose of giving you ample warning time to record this one!

Freddie exhibits all of his typical precociousness, but not from inside a famed literary adaptation this time but a contemporary set piece from MGM instead. I wrote about The Devil Is a Sissy HERE.

Finally, at 10 am Freddie plays the title role for David O. Selznick once again in another literary classic, Little Lord Fauntleroy (1936). In this one his young Fauntleroy succeeds at charming a very surly C. Aubrey Smith into not only accepting him but into finding out he's capable of becoming a pretty decent old fellow himself. I just wrote a brand new article about Little Lord Fauntleroy that you can find HERE. 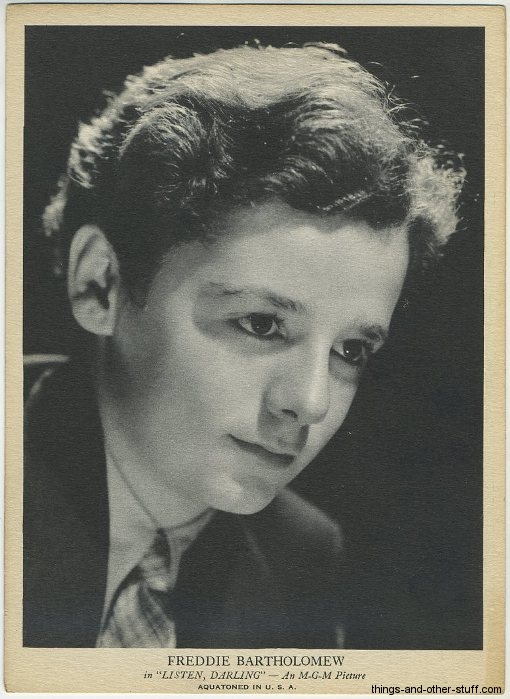 While Captains Courageous (1937) is missing from the schedule these three titles are among the very best to introduce anyone to the young man who was, for a few years, second only to Shirley Temple in the pantheon of child actors.

It was a little over a year ago that I became somewhat obsessed with Freddie Bartholomew's biography and much to my surprise there were several others as concerned with the prevailing inaccuracies as I was at that time.

What began as a simple biographical piece developed into a three-part monster of an article.

I summarize it all HERE with the briefest possible Freddie Bartholomew biography I could write. That same page also includes a bibliography of all of the sources I used in putting the larger work together. That short biography is also the most accurate bit I wrote about Freddie because I posted Parts One, Two and Three of the longer article as I worked on it . So I knew much more by the end of Part Three than I had at the start of Part One.

Be sure to read the comments at the bottom of each of those first three entries to discover valuable insight from others who were researching Freddie Bartholomew at the same time.

When Freddie died in 1992 The New York Times published some incorrect material which was repeated over the years in a variety of sources right down to Wikipedia and the IMDb in more modern times. Those two encyclopedic sites feed so much of the web that any inaccuracies which they publish typically become fact by repetition (and importation).

Some of the very folks who commented on my Freddie pages took the proactive steps of correcting and enhancing the information found on both Wikipedia and IMDb. A year after exchanging comments and emails with those dedicated individuals I just wanted to add: Great job! Those two sites have moved from embarrassing to among the best sources on the web for Freddie Bartholomew information!

Freddie Bartholomew wound up the 1930's with a much more impressive list of classic films to his credit than many of his better remembered adult contemporaries from the period managed. And Freddie really didn't get started until 1935!*

*He does have a handful of earlier credits to his name from back in Britain.

The list reads like an exalted library shelf: David Copperfield and Little Lord Fauntleroy, plus Anna Karenina (1935), Captains Courageous (1937), Kidnapped (1938) and Swiss Family Robinson (1940). Plus there was The Devil Is a Sissy along with Lloyd's of London (1936), Lord Jeff (1938) and Tom Brown's School Days (1940). Freddie played more than a small part in all of them, often the lead in fact.

Enjoy Wednesday's trio of hits, a great introduction to the top male child star of the period.