You are here: Home / News - Notes / A Look Inside My TCM Now Playing Guide: Previewing April 2012 on TCM

Time to look at what caught my fancy in the April 2012 TCM Now Playing Guide.

I lean on the daytime features because those are less publicized than prime time programming. They tend to interest me more because they're often lesser known and lesser shown titles. And they can be heavy on the 1930's.

TCM's Star of the Month is Doris Day which has been very well received from what I've seen but personally makes me glad baseball season is here. TCM also gets a bit daring this month in confining its Star of the Month programming to a single week rather than spacing out their star coverage throughout the month. So if you love Doris Day then you might think April 2-April 6 is the best thing TCM has ever done, but if you're like me, well then, at least The Winning Team (1952) is part of the Day-celebration on April 4. Play ball!

TCM's Star of the Month for May is Joel McCrea. That will get some coverage in this space. And just in case you're curious, common sense returns to TCM with the May-McCrea movies airing each Wednesday night throughout the month rather than being condensed into a single week as in April's Day offerings.

Back to April. Could be better, could be worse. A few days I found myself circling. Here they are:

Friday, April 6 splits the day between Kay Francis and Edward G. Robinson with I Loved A Woman (1933) featuring both of them directly linking the pair at 11 am.

Monday, April 9 is Ward Bond day celebrating the 1903 birth of the popular character actor with 9 titles ranging from 1935-1940 that appear to have been picked out of a hat:

It falls outside this chronological timetable but it's a shame Gentleman Jim (1942) doesn't make the cut. (It's next scheduled to air May 20).

I try to stick mainly to often forgotten daytime hours here, but wanted to mention the fine Hollywood double-feature airing Prime Time Sunday, April 15 with the 1937 A Star Is Born at 8 pm with a title that strongly influenced it, What Price Hollywood? (1932), following at 10 pm.

The short directorial career of Harold S. Bucquet included 8 titles in the Dr. Kildare series and 1 from the Dr. Gillespie spin-off. TCM does not air any of those, but does celebrate Bucquet's birthday, Wednesday, April 10 with eight non-series films directed by Bucquet. The schedule:

Monday, April 16 features a morning birthday mini-thon as the Little Tramp is gives over the bulk of the day to, erm, Peter Ustinov, who was also born April 16. 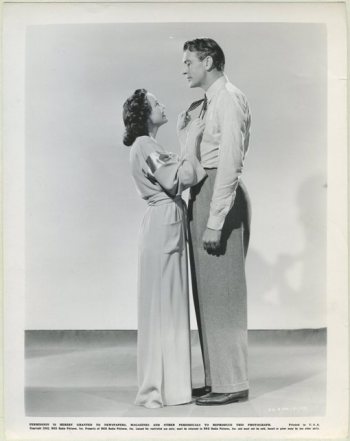 Teresa Wright and Gary Cooper in The Pride of the Yankees

Then I'll skip the beach movies that evening and watch the Yanks instead. Hopefully they're not off that night because I'd probably suffer through an Astros game just to miss the beach movies.

Watch for Alibi Ike and Babe Ruth finding themselves in the same arm sling in a scene The Babe Ruth Story remakes from Alibi Ike. William Frawley, another big baseball fan, figures in the scene in both movies!

Two 1941 favorites air early Sunday, April 22 with Clark Gable and Lana Turner in Honky Tonk at 6:15 am followed by James Cagney with Olivia De Havilland, Rita Hayworth and Jack Carson in The Strawberry Blonde at 8:15 am.

A Man to Remember

It Happened in Hollywood looks especially interesting and never having seen it I've circled it heaviest and added a few stars around the entry in my own April Now Playing Guide.

I've done this a couple of times dating back to January 1, so why not keep it going. After suspecting my favorite film decade (and after reading above that shouldn't be too tough to guess) was getting shortchanged, I turned to the back of my Now Playing Guide and tallied off the films by the given release date, grouping them by decade. The list is limited to movies (no documentaries for example) and if it airs twice it's counted twice. Here's the April tally:

Thanks to those Chaplin and Laurel & Hardy days the 1920's enjoy a bit of a push in April and begin to approach the 80's. Certainly the 80's far outstrips the 20's in running time or hours of programming allotted, but at least the 20's make a gain through our imperfect count! The 60's gain a little ground back on the 40's, which had leapfrogged it last month and the 1910's tie up the 1990's.

Joel McCrea in May, can't wait!