I'm on a bit of a Paul Muni kick. Frankly I think he gets a bit carried away on the screen sometimes (Juarez?), but it's hard not to love every movie that he headlines (Juarez!). I likely wouldn't love them if Muni didn't go too far once in awhile. I'll see other actors go a bit overboard, and I always think of James Dean collapsing at Raymond Massey's feet in East of Eden (1955) when I say that, and I'll shake my head and wonder what all the fuss is about. See, to me, too much Dean just seems like Dean trying way too hard. But too much Muni feels much more human, like it's Muni-plus.

I know I'm in the minority on that point, but I think it shows where I'm coming from, a big part of why this site is so set in the thirties. These, I suppose, old-fashioned views are also probably why I'm so stunned that no one has published a biography of Paul Muni in 37 years.

In fact, there have only ever been two Paul Muni biographies published and both came out in 1974, just seven years after the death of the Oscar winning star of The Story of Louis Pasteur (1936). Perhaps more importantly, just three years after the death of his wife, Bella. During one of my more recent and concentrated shopping forays on Amazon.com I picked up used copies of each of those books about Muni: Paul Muni: His Life and Films by Michael B. Druxman

and the superior Actor: The Life and Times of Paul Muni by Jerome Lawrence

The first book, the Druxman one, follows the familiar formula of spending about 80 pages or so on a brief biography of its subject, before turning over 130-140 pages to each of the movies Paul Muni appeared in--likely fewer than you expected, Muni having appeared in just 23 feature length films over his 30-year film career--with much of the space spent on photographs and cast listings.

As I said, the Lawrence book is the superior volume, save your money and seek it out. This is only natural, as not only did Lawrence know the Munis, he is the same prolific playwright who, along with writing partner Robert E. Lee, wrote Inherit the Wind which featured Paul Muni in the lead when it opened in 1955. Beyond his personal interaction with Paul and Bella Muni, Lawrence would inherit the notes to the Muni biography he and Lee had urged Bella to write after Muni's death.

The first 100 or so pages of Lawrence's Actor read like a history of Yiddish theater. In fact we're further into the book than that before the fellow who was born Muni Weisenfreund is dubbed Paul Muni. We follow his family from Europe to America and then follow the Yiddish theater as it parallels Broadway from the turn of the century through Muni's own rise into the 1920's. But, believe it or not, this article wasn't intended as a book review, but to instead dwell on that time Lawrence so perfectly describes where three of actor Paul Muni's greatest parts more or less converged upon the American public and created a major star.

You know the story, after The Jazz Singer (1927) Hollywood gobbled up all of the Broadway actors that it could get to come west and Muni Weisenfreund, despite his success on the stage, wound up under contract to Fox Films where he'd make The Valiant and Seven Faces, both 1929 releases.

Despite excellent critical notices, William Fox wasn't impressed and after the stock market crashed in October 1929 the company told Muni that they wanted "big box-office stars" for what had been planned as his next picture, Liliom, and offered him a villainous role in support of Charles Farrell instead of the lead. Bella blew up at the idea of the demotion and succeeded in riling up Muni himself. A few days after his contract was terminated Paul Muni would receive the first of an eventual six Best Actor Oscar nominations for his role in The Valiant. But it was happily back to Broadway for Muni where he was unfortunately cast in a string of successive flops. 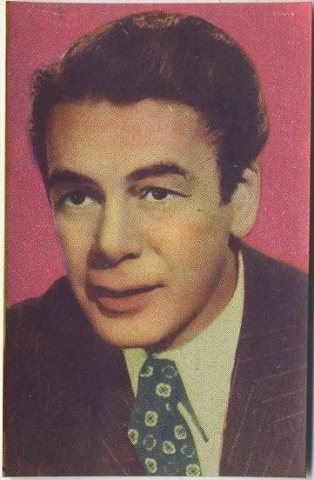 It was after what Lawrence describes as "Muni's shortest and most disastrous Broadway run," all of seven performances in Rock Me, Julie, that Howard Hawks contacted Muni about Scarface. They did a screen test, mostly to convince Muni himself that he was right for the part, and filmed during the Spring and Summer of 1931. The contentious censor battles over Scarface, before, during and after production, would delay the film's release until its eventual New York opening at the Strand Theater, March 31, 1932.

Long before that opening, in fact on the final day of filming for Scarface, Muni received a letter from the Pulitzer Prize winning playwright Elmer Rice explaining that Rice had just finished his new play, Counsellor-at-Law, and that he thought Muni would be perfect as the lead, George Simon. Muni read it and loved it and the issues Scarface was having with the censors worked in his favor as producer Howard Hughes allowed the option he had on Muni for an additional film to lapse. Muni headed East to play Simon in what would be the longest running play of the 1931-32 season. Counsellor-at-Law opened at the Plymouth Theater in New York on November 6, 1931 and ran for 292 performances during that first run into July 1932. Remember, Scarface had finally opened in New York that Spring, to rave reviews, and so it was a double-triumph for Muni. How about a triple?

The studio Muni would most famously be associated with came calling next when Warner Brothers presented him with what would eventually be called I Am a Fugitive from a Chain Gang. This classic would be filmed during July-August 1932 with Muni returning to New York September 12, 1932 to pick up the part of George Simon again back at the Plymouth where Counsellor-at-Law would run for yet another 104 performances before touring other American cities. Chain Gang would open in New York in November 1932 where it replaced the long-running Scarface at The Strand. "Muni was to replace Muni there," (181) wrote Lawrence, while the New Yorker could also go see Muni in the flesh in Counsellor-at-Law through May 1933.

How about that period for the making of a star? 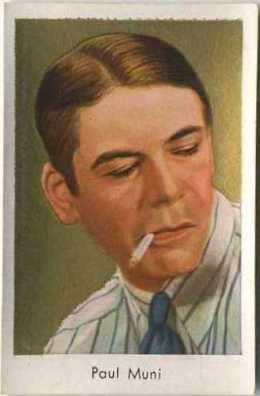 Paul Muni wouldn't return to Broadway until the very end of the 1930's when he'd play the lead in Maxwell Anderson's Key Largo, the part Humphrey Bogart would later play on screen. He wouldn't play George Simon on screen either, Counsellor at Law was made by Universal with John Barrymore playing the part. He would receive a very favorable contract from Warner's and eventually take what had been George Arliss' place on the roster playing the lead in that string of memorable biopics including his Oscar-winning Pasteur and Oscar-nominated Emile Zola.

In the coming weeks I hope to take a more detailed look at Muni in The World Changes (1933), the shamefully forgotten film he starred in immediately after I Am a Fugitive from a Chain Gang, as well as John Barrymore's portrayal of George Simon in Universal's Counsellor at Law (1933).

A final few words on Jerome Lawrence's Actor: The Life and Times of Paul Muni

. If anything it suffers from quotations miraculously regurgitated verbatim from ten, twenty, thirty years earlier. No doubt they're often guess work and come from the author's memory, but they're consistent enough with the Paul Muni he shows us to sound as though he really could have said these things. On the plus side, earlier I failed to mention the photos, which are often too small but always worthwhile, especially the early Weisenfreund family photos. As a used and long out of print title I'd recommend picking it up for as much as you're willing to spend on any single book. As long as you don't exceed your personal budget you're going to be happy with this one!