Above: Stanley Fields in Little Caesar (1931)

Stanley Fields had a voice that matched his face. Either could have been raked over gravel. His movie career lasted just a brief and blustery dozen years, but he still appeared in over one hundred feature film releases. He died a long time ago, a sergeant in the Great War who left us several months before the attack on Pearl Harbor drew the United States into the second World War. If you’ve caught any of his movies—I count at least a good one-third of them as very entertaining—then you’ll remember Stanley Fields.

Fields wasn’t a big enough star to warrant much press coverage. Typically his clippings are in praise of his performances. His on-screen crooks and cranks were loud and direct, but Stanley Fields seemed almost shy when I went seeking out any quotes and interviews from him. They’re just not there. Certain aspects of his biography seem colored by his often stormy screen persona.

Above: Stanley Fields as the captain in Island of Lost Souls (1932)

He was Frank Fay’s comic foil in vaudeville, it’s said, a story that sometimes goes so far as to mention the once popular team of Fay and Fields. You won’t find them together in any papers—news or trade—prior to the time of Fields’s 1929 screen debut. I’ve seen Frank Fay share inked pages with Lew Fields, Benny Fields, W.C. Fields—every Fields this side of Gracie—but never with Stanley Fields. Until 1929.

It’s often repeated that Stanley Fields was a boxer—until the great Benny Leonard broke his nose. It’s possible. It would account for Fields’s face, a busy feature that looks like something a five-year-old may have arranged out of a slab of Play-Doh. Boxers often fought under names other than their own, but Benny Leonard isn't on record as having ever fought anyone named Fields or Field, nor anyone with a name similar to the one Stanley Fields was born with, Walter L. Agnew.

Walter L. Agnew was born in Allegheny, Pennsylvania, May 20, 1884 (some sources state 1883). Walter’s parents and two eldest siblings were all born in Ohio, where father George B. Agnew had married mother Jeanette “Jennie” Gardner in 1873. Jennie gave birth six times, but only four of the children lived. George B. Agnew was a real estate agent, while by the time of the 1900 U.S. census, George and Jennie’s teenage son Walter—the future Stanley Fields—listed his own occupation as jeweler.

All four of Walter’s grandparents were from back east, three from New York, one from New Jersey, but without reactivating my Ancestry.com account (pricey, I used FamilySearch.org to get this far), I didn’t have any luck tracing the Agnew/Gardner families any further back than the circa 1817 births of George’s parents. Stanley Fields was at the very least third-generation American born, his lineage almost certainly dating even further back than that.

By the way, Fields’s IMDb page lists former U.S. Vice-President Spiro T. Agnew as a distant relation. I think we can discount this since the former veep’s own father had shortened his name from Anagnostopoulos and didn’t come to the United States until 1903.

Above: A scene from Fifty Miles from Boston from Labor World (Duluth, MN), November 7, 1908. Is that young Stanley Fields at the far right? He has the face for it.

The Stanley Fields biography becomes spotty after this. Did he box? Possibly, but his name does not appear on any public record again until he latched on with George M. Cohan’s musical comedy Fifty Miles from Boston in 1908. He was twenty-four by this time, and had certainly done something with himself between the time he was a jeweler and when he began touring with Cohan. Fields was with the Broadway company of Cohan’s show, and then accompanied the troupe on the road tour. His is the last name listed among “other good people in the cast” by the time the show hit the Lyceum in Duluth, Minnesota that November.

Fields stuck with the company and also appeared in the Cohan & Harris comedy The Red Widow starring Raymond Hitchcock in 1913. 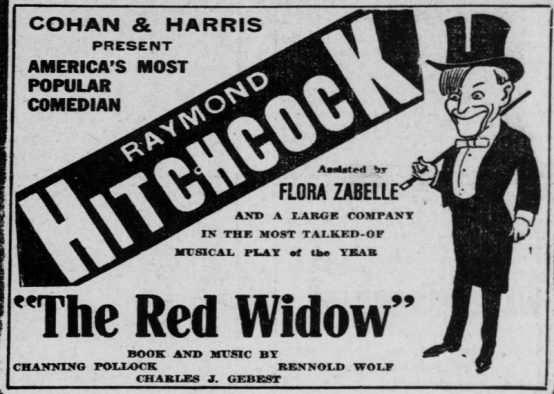 Above: Just a generic advertisement for The Red Widow during the time Fields would have been with the company. From the Tokeka Daily State-Herald, April 12, 1913.

He enlisted for the Great War June 25, 1917, serving as a sergeant in an Evacuation Hospital. Walter Agnew was released from the Army in June 1919, presumably resuming life on stage as Stanley Fields once again.

Fields married Alta Bailey in El Paso, Texas, September 22, 1924. While the Walter L. Agnew on record claims to be from New York and is five years younger than Stanley Fields, his birthday is the same May 20. It’s likely the same man, as I’m willing to concede that 1883 can easily be confused for 1888 on an old document. Also, an actor by trade, Fields may well have given a permanent New York address at this time if someone had asked.

According to journalist Robbin Coons, vaudevillian Fields foresaw troubled times after the movies began talking, so he got a jump on the end of his career by quitting the stage to open a brokerage office under the warm Hollywood sun. Of course, Coons also mentions Fields and Fay, and the Benny Leonard broken nose story, so I’m not sure how accurate any of this might be.

Above: Fields flanked by William Powell and Regis Toomey in one of his earliest releases, Street of Chance (1930).

Supposedly, citizen Fields stopped by a movie set one day to visit some old friends and when the director got a look at him he just had to have him for his movie. This led to Fields’s screen debut as a gunman in Norma Talmadge’s first talkie New York Nights (1929), which also turned out to be Norma Talmadge’s second-to-last film. Similarly, Fields was said to be paying a visit to old pal Frank Fay when Michael Curtiz spotted him and had to have him for the Al Jolson movie he was directing, Mammy (1930).

By then Stanley Fields realized he possessed both a winning squawk and mug. After landing the role of gambler Dorgan in Street of Chance (1930) starring William Powell, Fields was rewarded by Paramount with a five-year contract, and he left his business behind for good to concentrate upon movie work.

Stanley Fields became a familiar face—and voice—in the movies over the next decade. I hate to just list movie titles, but Fields played in so many quality films that I feel like I’m leaving out something important if I only mention a handful.

Above: That's Fields at the left squaring off with Richard Dix in Cimarron (1931).

He typically played mobsters and heavies in films such as Ladies Love Brutes, Her Man (both 1930), mob boss Sam Vettori in Little Caesar, and badman Lon Yountis in Academy Award-winning Best Picture Cimarron (both 1931). Also in 1931, Fields was General Bogardus in Cracked Nuts, one of three Wheeler and Woolsey movies in which he appeared, and Blackie, a mob boss who’s quickly taken care of in Rouben Mamoulian’s City Streets. Warren William decked his Mr. Pondapolis in The Mouthpiece (1932), and then Fields was especially nasty later that year as Captain Davies in Island of Lost Souls. In between he was cast against type in Hell’s Highway, and appeared in The Kid from Spain, the first of four Eddie Cantor movies he played in.

Other well-known titles that Stanley Fields appeared in throughout the 1930s include Terror Aboard, Roman Scandals with Cantor (both 1933), with Cantor again in Kid Millions (1934), Baby Face Harrington, Mutiny on the Bounty (both 1935), Edna Ferber’s Show Boat, The Devil Is a Sissy (both 1936), Maid of Salem, The Great O’Malley, Way Out West with Laurel and Hardy, The Toast of New York, Souls at Sea (all 1937), Of Human Hearts, Arsene Lupin Returns, The Adventures of Marco Polo, Algiers, The Sisters (all 1938), and Blackwell’s Island (1939).

By this time Fields was found himself “clicking” at last, as one article, “Pops to Fame,” said of his career, while also comparing him to Wallace Beery. The writer mostly meant his career trajectory, which is not really true, but otherwise I like the Beery comp. A poor man’s Beery, Stanley Fields also has a very McLaglen-look about him. He’s best at playing thugs, ignorant ones with plenty of menace, but that hard attitude also worked for unexpected charm every so often, especially towards the end of his career.

Stanley Fields was preparing to report to work on his next movie, Lady Scarface (1941), when he was struck down by a heart attack. He died April 23, 1941, at age fifty-six. Fields was survived by his wife, presumably the former Alta Bailey.