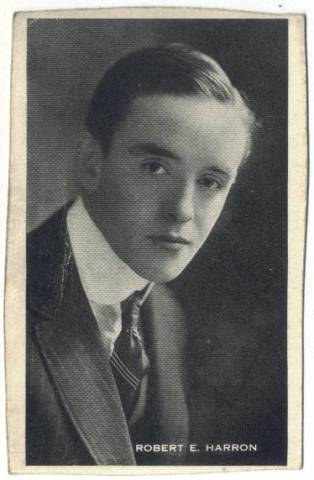 "I'm in a devil of a fix; I've shot myself," Harron told the manager of the Hotel Seymour in New York on September 1, 1920. Four days later, September 5, the 27-year-old film star was dead.

Despite such an early, tragic exit Bobby Harron managed to appear in well over 200 features and shorts, most shorts, dating back to his 1907 debut for D.W. Griffith at Biograph. He appeared in The Birth of a Nation (1915) and Griffith starred him in Intolerance (1916). Of that role film historian Anthony Slide best captures Harron's appeal:

The innermost feelings of the character are revealed through Harron's close-ups and body language. He is young and vulnerable, trying desperately to prove himself ... He loses his self-respect, his child, and comes close to losing his life. Even if at times the plotline might seem overly melodramatic, there is a modern naturalism to Harron's performance that holds the audience to rapt attention.

Slide referred to it as "the finest male performance in silent films." It's certainly the highlight of those two-and-a-half plus hours for me, in what is one of only a small handful of silent films I've watched on multiple occasions. Time never drags when Harron's Boy is on the screen, only when I'm waiting for him to next appear.

While there are multiple theories pointing to Harron's shooting as a suicide (1. Disappointed that Griffith cast Richard Barthelmess over him in Way Down East [1920]; 2. Trouble in personal relationship with Dorothy Gish.), most of his friends and peers have always insisted it was an accident.

He had just dressed, preparing to go to the studio, where he was engaged for acting in 'The Brass Bowl,' and for some reason not learned lifted some clothes from a trunk. The pistol fell to the floor and exploded, the bullet lodging in his chest (Times).

In the hospital Harron was placed under arrest and charged under the Sullivan Act for possession of the gun without a permit. He was moved to the prison ward of the hospital, but a friend put up $500 bail to release Harron from that indignity.