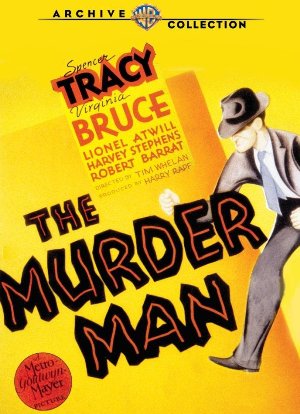 The Murder Man would be a routine murder mystery if not for Spencer Tracy’s intense performance in an unconventional leading role. Tracy, giving it his all in his first movie under contract to MGM, plays alcoholic Daily Star reporter Steve Grey, dubbed “The Murder Man” for his ace coverage of sensational murder cases. The Murder Man sets him up with a doozy before we even meet him, setting partners in a crooked investment firm at each other’s throats before croaking one of the unscrupulous pair in the next scene.

A group of reporters featuring familiar faces like William Demarest, George Chandler, and James Stewart, in his feature film debut as the Star’s own cub reporter, find out about the murder while loafing around the police station press room. The Star’s fiery editor, Robins (Robert Barrat), presumes his missing star reporter, Tracy’s Steve Grey, is off on a bender, so he unleashes a search party of reporters and policemen to drag him back to work. A beat cop eventually locates Grey sleeping on a merry-go-round with a string of carnival tickets wrapped around his neck to keep the machine moving indefinitely.

The reporters all gather in the lobby of Halford & Mander Investments, where Mander (Harvey Stephens) hides out in his office while police Captain Cole (Lionel Atwill) investigates the office of not-so-dearly departed partner Halford (Theodore von Eltz). Steve eavesdrops at Mander’s door before picking up an outside phone line to listen to a conversation between the surviving partner and a shady figure that the company owes twenty grand. Mander is counting on a quick payoff from his partnership insurance to settle the debt. Steve then bursts into Mander’s office to confront him, but Mander isn’t talking and even threatens to clobber the aggressive reporter with a paperweight. Gaining nothing from Mander, though certainly having managed to shake him up, Steve next gains entry to Halford’s office, where he corners the lead investigator on the case, Captain Cole. 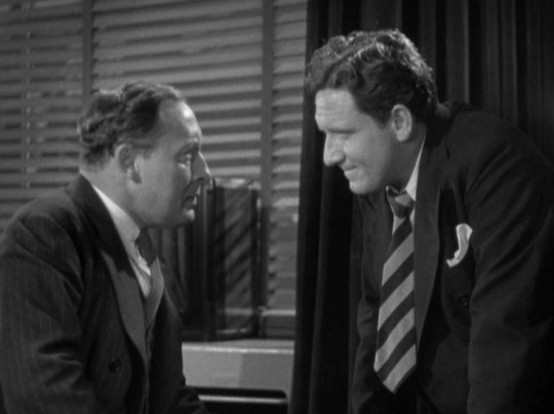 Above: Lionel Atwill and Spencer Tracy.

After it’s revealed that Cole’s underling Sweeney (John Sheehan) has goofed the basic ballistics report, the Captain is sold on Steve’s idea of having a look at a nearby shooting gallery as the potential source of the deadly shot. Surviving partner Mander is soon charged with murdering his late associate, Halford.

But despite Mander’s crooked business practices, we know he’s innocent of murder almost from the start.

Sure, he and Halford clashed overt Mander’s attempt to fleece the government at the open of the film. And Mander did visit the shooting gallery that Grey is hot about, but he seemed on the level when he asked the gallery operator, Rafferty (Lucien Littlefield), about a message he was supposed to receive. Rafferty isn’t aware of any message, so we know this is probably a set up. By the time Halford is declared dead, Mander appears to be the top suspect, but then he takes a phone call from a shadowy figure who speaks in a gruff whisper. It’s the man he was supposed to meet, so Mander asks why there was no message: “I gave it to Halford, you’ll get yours later.”

While Halford’s murder and Mander’s frame-up remain a mystery to the characters of The Murder Man, the audience quickly has a pretty good idea of who the killer is. Even so, this doesn’t mean that The Murder Man is without its intriguing moments.

For once Lionel Atwill isn’t the killer or even teased as a red herring. He’s entirely on the level as Captain Cole, which I have to admit is a bit disappointing, even though he's fine in the part.

Busy character man Robert Barrat turns in strong work as the Daily Star’s anxious editor, who values story over personnel and expects his reporters to fulfill their duties at any cost.

Virginia Bruce is wasted for most of the movie as Tracy’s love interest, Mary, who answers letters in the Star’s lonely-hearts column. She gets more involved later in the movie and finally begins to feel like an equal match to her talented leading man—Bruce is very good in her last couple of scenes.

Above: This guy isn't going anywhere! James Stewart in The Murder Man.

James Stewart is a bit too goofy to stand out for anything more than his gangly build in this, his first feature after previously having appeared in one short. If he weren’t familiar ole Jimmy Stewart we wouldn’t even remember he was there because Spencer Tracy does what he’s supposed to do and dominates throughout The Murder Man, elevating it above typical B-mystery fare in doing so.

Tracy plays Steve Grey with a bitterness that is foreign to MGM leading men to this time. Gable might get pissed, Montgomery pissy, and Powell never anything more than mildly irked, but Tracy presents a frightening sort of anger that always seems as though it’s about to boil the lid off the pot. His best scene comes when Grey is called back from a sabbatical to interview Mander at the death house. While the inmate is upset by the choice of reporter, the reporter is seething. His jaw clenched and teeth grinding, Steve explains why Mander deserves what he’s going to get. Steve then returns to the office where he guzzles booze while trying to nail down the story. By this point Steve is so worked up that he even snaps at the ever supportive Mary, the Virginia Bruce character. She’s hurt after being spurned by him and reduced to a frazzled bundle of nerves, unlike the usual teary distress caused by a movie’s romantic complications. But then Steve Grey is not your run-of-the-mill leading character.

The Murder Man is most often singled out as being James Stewart’s debut feature, but curiosity seekers only interested in that facet of the movie will likely be disappointed. It’s more important as Spencer Tracy’s first film under contract to MGM. After Tracy and MGM agreed on a generous contract that quickly proved mutually beneficial, the actor had to go back to Fox and get out of his contract with them (Curtis 259). That deal was easily enough severed with the promise of Tracy making himself available for one more film at Fox within the next year, an option Darryl F. Zanuck didn’t bother exercising during the busy transitional period after Fox merged with his 20th Century film company (Curtis 365). Irving Thalberg originally planned to start out Tracy at MGM opposite Jean Harlow in Riffraff, but when that production was delayed Tracy first wound up in The Murder Man.

Tracy signed with MGM on April 2 and The Murder Man entered production on May 28 (Curtis 261). It wound up releasing July 12, a few weeks ahead of the New York premiere of Tracy’s final film for Fox, Dante’s Inferno (1935).

The Murder Man was adapted from an original story written for the screen by Tim Whelan and Guy Bolton. Whelan, along with John C. Higgins, also adapted his story into a screenplay and served as director on the film. The Indiana-born Whelan is best known for his work in Great Britain, where he directed titles including Sidewalks of London, The Divorce of Lady X (both 1938), and his best known work, The Thief of Bagdad (1940).

Above: Virginia Bruce and Spencer Tracy.

The Murder Man is little remembered today, but at the time of its release—a time before anybody knew that major films like Captains Courageous (1937) and Boys Town (1938) awaited Tracy—critics spent most of their ink heaping praise on MGM’s newest talent property, Tracy. “One of the most colorful and absorbing performances of his career,” Motion Picture Herald said of Tracy in what was far from a unique appraisal. Forgettable by virtue of the big films Tracy starred in after it, The Murder Man deserves a slice of our memory for featuring a strong performance by a hungry actor looking to make the best possible first impression on the company that soon rewarded him with parts assuring his screen immortality.

My thanks to Warner Archive for providing a review copy of their recent manufactured-on-demand DVD-R of The Murder Man - Pick up your copy here. All accompanying screen captures were grabbed from my copy of that Warner Archive disc.

For another look at The Murder Man see Laura’s review at Laura’s Miscellaneous Musings.

Above: Tracy dictates a scoop.

Metro-Goldwyn-Mayer. Hollywood preview July 7, 1935; Premier July 12, 1935. 69 minutes. Based on an original story by Tim Whelan and Guy Bolton; adapted by Whelan and John C. Higgins; directed by Whelan. Starring Spencer Tracy, Virginia Bruce, Lionel Atwill, Harvey Stephens, Robert Barrat, James Stewart, William Collier Sr., Bobby Watson, William Demarest, John Sheehan, Lucien Littlefield, George Chandler, Fuzzy Knight, Louise Henry, Robert Warwick, Joe Irving, and Ralph Bushman. The Murder Man would be a routine murder mystery if not for Spencer Tracy’s intense performance in an unconventional leading role. Tracy, giving it his all in his first movie…
The Murder Man (1935) Starring Spencer Tracy
The Murder Man (1935) Starring Spencer Tracy
Cliff Aliperti
Tracy stars as “The Murder Man,” an ace reporter who covers all of the big killings for the Daily Star in this murder-mystery. Darker than expected from MGM and darker than typically allowed under the Production Code. MGM’s new contract player is a hit in his first for his new employer, elevating what could have been routine. Co-starring Virginia Bruce. With Lionel Atwill and featuring the feature film debut of James Stewart.

Tracy stars as “The Murder Man,” an ace reporter who covers all of the big killings for the Daily Star in this murder-mystery. Darker than expected from MGM and darker than typically allowed under the Production Code. MGM’s new contract player is a hit in his first for his new employer, elevating what could have been routine. Co-starring Virginia Bruce. With Lionel Atwill and featuring the feature film debut of James Stewart.