You are here: Home / News - Notes / The Infinite Possibilities of Hemingway’s The Killers

The following piece originally appeared in the November/December 2013 special year-end giant issue of The Dark Pages newsletter. Featuring 40 pages packed with articles exclusively about The Killers, it is available for purchase from this page.

The opening scene of The Killers is all Hemingway. As masterful as that is, and it’s my favorite part of the movie, the genius comes in what follows: all original screenplay. The dialogue in those opening eleven or twelve minutes comes to us nearly verbatim from the page with William Conrad and Charles McGraw combining to make Hemingway’s text sound even more dangerous than it reads.

Ernest Hemingway’s story ends before the Conrad and McGraw characters even open fire. 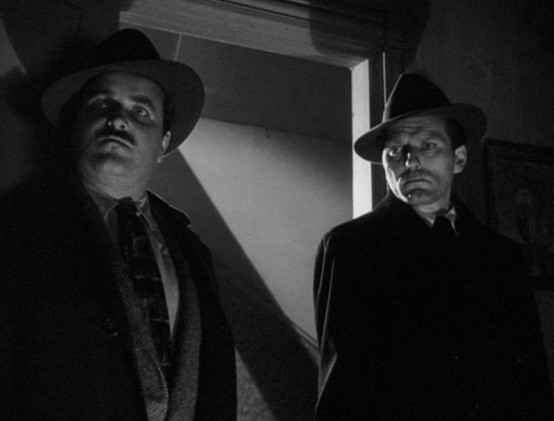 “The Killers” finishes with Hemingway leaving Nick Adams and the reader to wonder how and why the Swede, Burt Lancaster in the 1946 film adaptation, is so accepting of his certain death sentence. What sort of man is this and what had he done?

“I did something wrong. Once,” says Lancaster in the movie, slightly more telling than Hemingway’s original, “I got in wrong.”

While Conrad and McGraw are busy assassinating Lancaster on screen, on the page Nick Adams bids goodnight to the Swede’s landlady before returning to the diner to report the perplexing scene he just shared with the doomed man.

“He must have got mixed up in something in Chicago,” George, proprietor of the diner, says to Nick.
Nick wonders what the Swede could have done. George seems sure: “Double-crossed somebody. That’s what they kill them for.”

Hemingway wraps up within a few lines, leaving the imagination to wander.

Above: Phil Brown as Nick Adams comes to warn the Swede (Burt Lancaster). While Nick Adams is the focus of a series of Hemingway stories

, Brown's part in the movie is so small that he doesn't even figure in the credits.

For the screenwriters, including uncredited John Huston and director Robert Siodmak, it wandered through the dark emerging as the 1946 Universal film that is classic in so many ways, including story. They layer a post-World War II bitterness over top a prologue originally written as the twenties still roared for many, but while others, already Forgotten Men, struggled to find themselves in those years following the First World War.

For me it took the 1964 Don Siegel movie version of The Killers to realize the true genius of Hemingway’s story. That movie is a further step removed from the text, more a movie remake than straight adaptation of the Hemingway story. The Siegel film retains the killers, removes the Nick Adams character, but leaves Lee Marvin’s hitman character to obsess over all that had first puzzled Nick when the story was first published in Scribner’s in 1927.

From there is it a wonder that Hollywood has not dusted off Hemingway’s original story several times since.

In a DVD extra on Criterion’s 2003 release

of The Killers, writer Stuart Kaminsky comments upon the difference in the eras of the 1927 short story and the two movies that later sprung from it. He wonders how it would be remade today. The question is as timeless as Hemingway’s story.

You could lock yourself in a room and concoct an infinite number of scenarios springing from Nick Adams’ wonder at the Swede’s indifference to his coming murder.

Once the Swede falls dead in the 1946 movie, we are immediately introduced to Edmond O’Brien as the perfect protagonist. O’Brien’s Jim Reardon, found nowhere within the Hemingway text, is an insurance investigator who unravels the story of the Swede in a fashion recalling Citizen Kane in style and Edward G. Robinson’s off-camera deductions in Double Indemnity in process.

Above: Edmond O'Brien with Sam Levene.

The Siodmak movie could have gone anywhere after leaving the Swede’s room at the boardinghouse. O’Brien’s Reardon carries the torch Hemingway had planted in Nick Adams’ hands and follows those threads to a logical conclusion that completely explained both the fate of the Swede and his acceptance of that doom.

In adapting The Killers into a product of its time, the result is timeless. Even Hemingway liked it.

Once more, you can pick up this special issue or become a regular subscriber to The Dark Pages HERE. Thanks much to The Dark Pages Editor-in-Chief Karen Burroughs Hannsberry for including me in a second consecutive GIANT issue. My previous contribution about Joan Blondell for the 2013 Nightmare Alley issue can be read here.