I’m horrible with faces.  Thankfully some kind collector, either new or old, did their best to identify each of these mysterious Mack Sennett bathing beauties for us and I can at least confirm that they got Swanson right.

It actually looks like they put a good deal of work into identifying each of these Mack Sennett Comedies Arcade Cards and so I’m going to go with their suggestion, written lightly in pencil on the reverse of each card.

UPDATE: Since originally posting this and listing the Mack Sennett Comedies Arcade Cards for Sale on eBay I've come to discover my helpful collector knew about as much as I did. They got Swanson right, but only a couple of others with the great majority incorrect. Thankfully Ladd McIntosh, a musician by trade and huge fan of the Sennett Bathing Girls by hobby, contacted me through eBay and was kind enough to send corrections on all 20 of the cards shown on this page! I've updated the page (and the eBay sales pages) to reflect Ladd's corrections and wanted to offer him a big and public hearty thanks for his time and help. In addition Ladd had this to say about our Sennett Bathing Beauties:

Teddy Sampson, Annette Kellerman and Alberta Vaughn were never Sennett Bathing Girls. Gloria Swanson, likewise, was never a "bathing beauty." She was the STAR of a few Sennett films and some of them incorporated bathing beauties who were, at best, simply extras. Swanson was adamant to her dying day that she was never a "bathing beauty." Her presence in some of the photos with the girls confuses this issue. It is an injustice to put her in the bathing girl group. The same can be said of both Alice Day and Louise Fazenda. The ranks of Sennett's bathing beauties changed every season. The earliest group (circa 1915-1916) included the ones I named as well as Mary Thurman, Juanita Hansen, Mildred June, Maud Wayne, Lillian Biron, Claire Anderson, Rose Carter, Virginia Fox, Roxanne McGowan and Elinor Fields. I'm probably forgetting a couple. Most of them were teenagers at the time. Sennett added them to his films to get more male viewers into the theaters. It worked.

Thanks again, Ladd! Back to the remainder of the original post ...

I’ll number each card here despite there being no number at all on the actual issue just in case our helpful collector is wrong and you wish to correct us in the comments section way down below.

I wrote a bit more about Arcade Cards in general some time back on things-and-other-stuff.com but the basics for this grouping is each card measures approximately 3-3/8” X 5-3/8” with blank backs.

Each of these is available at auction on eBay

at the time I write this, any unsold Arcade Cards will be priced for immediate sale in my eBay Store after the auctions complete (psst. those fixed prices will be higher than the current minimum bids).

The watermark isn’t placed over the images to ruin them for you, but basically to save my bandwidth—if you want to copy the untainted images feel free to grab them off the eBay listings, I just don’t want to give away a copy and host the space as well...not without a little things-and-other-stuff.com ad at least! 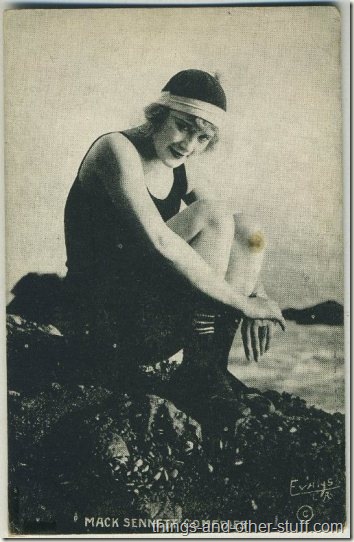 16) Vera Steadman in the white head band; Phyllis Haver giving her a boost below