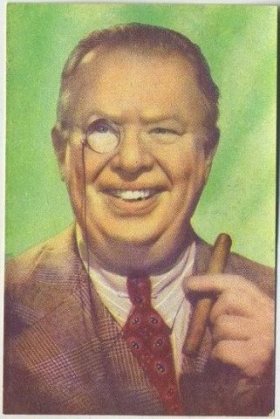 Charles Coburn didn’t begin regularly appearing in movies until he was past the age of sixty. He was six years beyond that mark when he won an Academy Award for Best Actor in a Supporting Role for his performance as matchmaker to Jean Arthur and Joel McCrea in the screwball classic The More the Merrier (1943).

Despite his late start in Hollywood, Coburn still appeared in nearly seventy movies, most always in strong support, and received an additional two Oscar nominations in a career that kept him active until just days before his death at age 84 in 1961.

Well before he had entered the movies Coburn had been a longtime veteran of show business. He made his first stage appearance in the 1890s and his Broadway debut in 1901. He founded an acting company in his name, married his co-star in 1906 and remained active with her across America until the time of her death in 1937. Only then did the sixty-year-old widower embark upon a full-time movie career.

Charles Douville Coburn was Georgia born and darn proud of it. He was born in Macon on June 18, 1877, though his parents, Moses and Emma, soon moved their large family to Savannah where Charles grew up. His show business career began in a Savannah theater where he first did odds and ends such as ushering and handing out programs before eventually making his debut in a bit part of The Mikado. Though no other roles came to him Coburn remained at his hometown theater working his way up to house manager before leaving the South behind for New York at age nineteen.

Decades later Coburn told Associated Press journalist Bob Thomas, “I can’t remember wanting to be anything but an actor. My mother and father were devotees of the theatre, although they were never on the stage.

“I suppose my desire to be an actor originated when my mother read me stories about theatre people. The glamor and excitement of their lives intrigued me and I wanted to be like them.

“I thought I wanted to be a comic opera comedian. I could sing and dance a bit,” Coburn said of his earliest days. “That ambition died when I played Shakespeare."

Things didn’t break right away for young Charles Coburn in New York. Like many struggling actors he had to take on a series of odd jobs, but his break finally came just when he was ready to call it quits and return home. A job as an advance man in a theater led directly to work with a Chicago touring company’s production of Quo Vadis.

From there Coburn quickly worked his way up to leads and by 1905 had formed the Coburn Players, his own acting troupe that specialized in Shakespearean productions. It was during a run of As You Like It that Coburn met and fell in love with his co-star, the beautiful Ivah Wills of Appleton, Missouri. They were married in Atlanta, January 29, 1906, and remained very happy with one another while continuing to headline the Coburn Players until Ivah’s death in 1937.

“I was lost,” Coburn said of that time. Without Ivah, “There seemed to be nothing left, nothing to live for. Then I received an offer to do a picture. I accepted. The movies gave me a new lease on life. I was happy and content” (Thomas).

Coburn’s film debut actually came in 1933 when he starred as Boss Tweed in a Columbia short that was the first volume in a “March of the Years” series. His first feature was in The People’s Enemy for RKO in 1935, but Coburn’s full-time Hollywood career began with his role in MGM’s Of Human Hearts in 1938.

In addition to his 1944 Oscar win for The More the Merrier, Coburn also received nominations for The Devil and Miss Jones (1941) and The Green Years (1946). Coburn’s best roles are comedies where he’s often cast as the confused father, grandfather or other elder statesman. He does so to great effect in classics such as Bachelor Mother (1939), The Lady Eve (1941) and George Washington Slept Here (1942). But Coburn had wider range than that as proved in his very dark performance in Kings Row (1942) where he plays a vengeful surgeon with a grudge against Ronald Reagan.

Charles Coburn’s most familiar physical attribute came to be his ever present monocle, which he began sporting in the early 1920s and continued to wear throughout his movie career. “I wear a monocle because of my eyesight,” Coburn said in 1950 (Clary). “It’s no affectation. Why should I want to appear as a hoity-toity Englishman, when I was born in Georgia and proud of it?”

Coburn was delighted as he prepared to work on Peggy (1950). “They’ve given me a part for a man with a monocle. First time a monocle’s ever been included in a movie script.” He claimed the only time he ever worked without the eyepiece, since the time he first needed it, was during a stage production of Lysistrata he appeared in. “The monocle was unknown in early Greece. I couldn’t get away with it.”

In the early fifties Coburn supported Cary Grant from the same office as Marilyn Monroe in Monkey Business (1952). A year later Coburn found himself supporting Marilyn in the classic Gentlemen Prefer Blondes (1953), also starring Jane Russell. “I can’t think of any more pleasant work than watching Miss Monroe and Miss Russell,” Coburn told Bob Thomas late in 1952. “Each possesses sex appeal to a remarkable degree. That is a kind of animal magnetism which is rare in human beings.” Then, showing his age, Coburn added, “Some of the great figures of the theatre had it—women like Anna Held and Lillian Russell.” Coburn also appreciated their sense of humor and how down to earth each of the younger actresses were. “Neither of them has let fame go to her head; they are regular and don’t put on airs."

Coburn also took on a lot of television work throughout the 1950s and continued to work on stage as well.

Coburn spoke of the new relevance of You Can’t Take It With You, which he had begun playing in stock theaters in 1955. “Back in 1936,” referring to when the George S. Kaufman-Moss Hart play was first a hit, “there were a lot of people the income tax didn’t even touch.” Four years later Coburn would declare the federal income tax law unconstitutional as he spoke to Charleston News and Courier reporter Otis Perkins. “We’re now on the verge on bankruptcy,” Coburn said as he foisted blame for America’s tax laws directly upon Karl Marx. Keep in mind that the top tax bracket in 1959 was 91% and those earning as much as $100,000 that year still paid 75% … or 89% if single.

But Coburn wouldn’t remain single through that calendar year. Maybe it was love, maybe it was the tax break, but Charles Coburn shocked everyone when he flew to Las Vegas without warning and married 41-year-old Winifred Jean Clements Natzka, widow of former New York opera basso Oscar Natzka, on June 30, 1959. “That’s the way he does things,” said Jay Faggen, Coburn’s agent and longtime friend, when asked about the surprise wedding. “He’s still quick on his feet and sometimes he will dance all night at a party,” Faggen added. “He loves good times, good food and action” (’Charles Coburn Marries’).

Coburn was chatty with the press throughout his movie career, but he really let loose throughout his later years. He still opposed the 14th Amendment proclaiming that it was “rammed through the Congress by Thaddeus Stevens, a cloven-hoofed villain who was determined to put the South on its knees” (Perkins). Coburn blamed the intellectuals for America’s social ills explaining, “You can’t legislate social problems. People who think you can just aren’t familiar with the problem—they’re just ignorant … You can’t make laws for sociology.”

Coburn, while visiting hometown Savannah, ripped into public schools and especially the teaching of U.S. history. “Everything is such an expression of ignorance that it galls me,” he said. “We teach history as if we never did anything wrong.”

He went on to say, “The Star Spangled Banner is a frightful piece of music,” and suggested that “Dixie” or, to be fair, the “Marseillaise” should take its place.

Coburn was still touring You Can’t Take It With You just three days prior to his death. He pulled out of the show with throat complaints to see a doctor. After a check-up Coburn was admitted to Lenox Hill Hospital in New York, where his heart gave out on him following what was described as a minor throat surgery.

His second wife, Winifred Natzka and one of her two sons by her previous marriage were at Coburn’s side when he died. Coburn left 5% of $50,000 estate to his widow, who also received an additional $10,000 in cash. He willed pieces of art to the University of Georgia and split the remainder of his estate amongst several friends and relatives across the U.S.

In his will Coburn wrote, “I know not from whence I came or whither I shall go. I know that I have lived and that all living things must die. I believe in a Supreme Power which is beyond the understanding of man" (’Charles Coburn Will’).

Enjoy Charles Coburn on TCM today and be sure to check out what other film bloggers are talking about at the Summer Under the Stars Blogathon at Sittin' On a Backyard Fence and ScribeHard on Film.