But then something happens which elevates Two Seconds to such a degree that it had me jumping on the IMDb checking for Oscar nominations (nope, nothing).  From the time Vivienne Osborne starts pouring liquor into Robinson, until the very end of the movie, Edward G. Robinson is stunning in every scene.  From finding myself chuckling at what at the 20-25 minute mark seemed like a bad movie with a few funny lines, Robinson suddenly had me sitting up and telling the TV how fantastic he was.  I was dumbfounded by what this previously forgettable film had turned into.

Robinson’s performance builds from the drinking scene, which is mostly amusing but nonetheless well-performed.  His boozing saddles him with a wife he didn’t want and who he knows isn’t any good. It’s in defending her honor that his temper snaps, leading to a shocking and spectacular scene that leaves Robinson’s character unable to continue a normal life.

Robinson is left a shell of himself and that’s when he really ratchets up his performance to full tilt.

He’s an incoherent mess glued to a chair in his apartment forced to watch his wife pay the bills with money he knows she can’t possibly be earning honestly … or virtuously.  By this point he’s too preoccupied with his grief and general situation to muster the strength required to put a stop to her questionable professional activities. That changes when a bet made through bookmaker Guy Kibbee pays off big.  Robinson, empowered through the first money he’s been able to earn since the traumatizing incident, allows knowledge of his wife’s affairs to bubble over with the result being him more out of his mind than you’ve ever seen.

I didn’t care much for Vivienne Osborne at first. I wasn't really familiar with the actress and found her insubstantial as romantic lead, but she grew on me as the film progressed.  Along with Osborne, most of the other support and even the bit players came across as common and ugly characters. But what had turned me off when I first saw Two Seconds, only seems to add to its flavor in recalling it now. 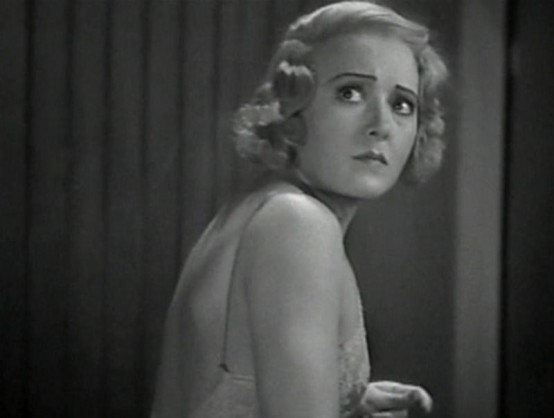 But Osborne and the rest really are just extra flavor, Two Seconds is all Robinson. He's the entire attraction here.  It’s not a subtle performance by any means.  No, it’s like someone zapped him with a cattle prod leaving us with nothing but total frantic energy. As over the top as this might have been, I never found myself doubting Robinson He brought it all off as natural and I don’t believe there are many who could have delivered in this part as realistically as he did.

Robinson in Two Seconds gives, quite possibly, my favorite single performance of the entire pre-Code era, Ann Dvorak in Three on a Match included.