That question actually has a very simple answer. But there's a much more colorful explanation tracing Clara Lou's path to becoming a major movie star.

It all began with a contest.

”’I’d give anything to go to Hollywood!’

"How many thousands of young men and women have expressed this wish, the desire to see the City of the Stars, to rub elbows with the great, to enter the magic studio gates!

"Perhaps this is your chance—now. To go not merely as a guest, but to enter Hollywood as one of its members with a contract in your pocket to appear in one picture—and maybe more!

"The Majestic theater 'International Search for Beauty' Contest may be your opportunity.”

In May 1933 Paramount sent out their final call through the trade magazines for thirty “perfect men and women.” High qualifications indeed, though as you may have guessed Paramount’s first hurdle to perfection could be cleared with a stunning shot of yourself in a swimsuit.

Kitty Sheridan sent the Dallas News just such a photo of her 17-year-old sister, Clara Lou.

The Dallas News was just one of 241 newspapers from English speaking nations across the world who helped vet this first phase of Paramount's International Search for Beauty contest. On top of all of those papers there were nearly 1,000 movie houses and two dozen radio stations running local contests that whittled the competition down to the most perfect 30 men and women.

These 30 contest winners were handed 5-week contracts by Paramount at $50 per week to appear in their early 1934 release Search for Beauty starring Buster Crabbe and young Ida Lupino.

Search for Beauty isn’t one of my favorites from the era and coincidentally I just had another opportunity to pick on it in conversation with Danny Reid after he wrote about it just last week. This is one pre-Code title I just find a little too silly for my tastes. Too bizarre, too immature. Maybe I'm getting old, Search for Beauty is just too much youth for me to handle.

About halfway through this piece of nonsense Paramount’s contest winners are imported to Buster and Ida's health spa. A select few, including Clara Lou’s fellow Texan winner Alfred Delcambre, are even introduced and given the opportunity to speak a line or two.

Just prior to the unleashing of the true spectacle our contest winners are introduced. As “Texas” is announced our Clara Lou Sheridan strides towards us side by side with who I imagine is the other Texan, Alfred Delcambre.

That’s the only time I spotted Clara Lou. But as Ann Sheridan fans can see, that's definitely her. 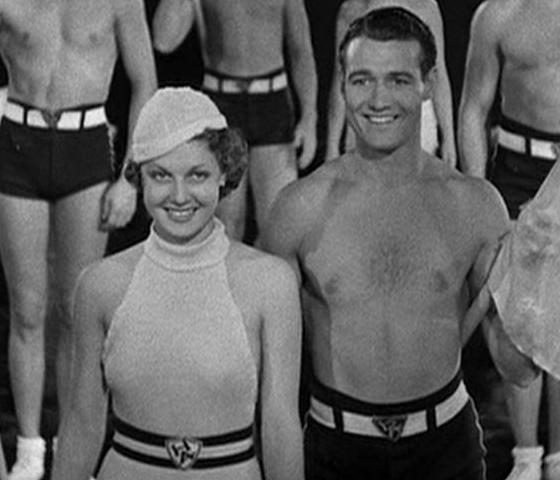 I cropped some of the others out of this one to give a better look at Ann, er Clara Lou.

Clara Lou Sheridan was born and raised in Denton, Texas where she attended public school. She was involved in theater at Denton High School and studied dramatics, singing and dancing at the North Texas Teacher’s College after she graduated high school.

She was “personality girl” for Floyd Graham’s orchestra in theatricals produced by the Teachers College Little Theater. Period coverage claimed that Clara Lou sang blues numbers for Graham, easy to believe given her husky voice. She spent several months touring the area with him appearing in local cities such as Fort Worth, Dallas and whatever other cities the Kiwanis Club would sponsor.

After her sister sent Clara Lou’s photo to the paper she emerged as one of sixteen local Search for Beauty finalists selected to make film and sound tests in Dallas. Those tests were then forwarded to Paramount in Hollywood.

While Clara Lou Sheridan isn’t given an opportunity to distinguish herself in Search for Beauty, she did manage to become just one of six of the thirty Search for Beauty contest winners to receive a long-term contract from Paramount in November 1933.

The others held over by Paramount were Sheridan’s fellow Texan Delcambre; Colin Tapley of New Zealand and Gwenllian Gill of Scotland, each of whom were actually heard in Search for Beauty; and Eldred Tilbury of South Africa. Tilbury and Gill were also each awarded a $1,000 bonus by Paramount for being standout male and female performers from amongst the bunch.

It seems so simple. We see Ann Sheridan on the screen today and think, now, that’s a star! Well, it’s been pretty long odds so far on her way from Denton High School to Floyd Graham’s Orchestra to Hollywood in a whirlwind calendar year, but that leaves us with Clara Lou Sheridan, bit player. Not Ann Sheridan, star.

A break came when Lyda Roberti fell ill during production on College Rhythm. Roberti was scheduled for a scene with Mary Brian but when she became unavailable Clara Lou Sheridan was given the lines instead.

Clara Lou’s hometown Denton Record Chronicle reported that the press sheet claimed, “Her performance surprised the company. She did her bit so well that [director Norman] Taurog immediately ordered the part enlarged. And now other directors in the studio are clamoring for her services in their pictures.”

Film Daily backed up this report in their September 21 edition.

And while Sheridan never made it big at Paramount she did move up the ranks to supporting roles while there. She also became Ann Sheridan while with the company.

So how did Clara Lou Sheridan become Ann Sheridan?

In a 1965 interview Sheridan told Ray Hagen that she took the name of Ann from the character she was playing on stage in a production of The Milky Way (171). Paramount was using these theatricals to help build their young talent and as Ann tells it Clara Lou was just too many letters to fit comfortably on the billboard.

This must have happened in the Fall of 1934 because the press reported the name change when Sheridan was cast in The Vanishing Pioneer, a Zane Grey Western starring Randolph Scott that was retitled Rocky Mountain Mystery. Kathleen Burke, who had won a previous Paramount sponsored contest to fill the role of Panther Woman in Island of Lost Souls was in the cast of Rocky Mountain Mystery as well.

The Ann Sheridan name wasn’t first choice for Clara Lou. She could have accomplished the same billboard magic by simply dropping Clara off the front of her name, which is exactly what was originally done. In their October 2, 1934 edition Film Daily reported Lou Sheridan had been assigned to what would become Behold My Wife. They made sure to stress that this was the actress formerly billed as Clara Lou Sheridan.

One report said that the studio found Lou Sheridan too masculine. Good thing The Milky Way came along then. Ann Sheridan, a much better fit!

In early 1935 Paramount decided not to pick up the option on Ann Sheridan’s contract. Sheridan recalled to Hagen that the decision likely came because she due for another $25 or $50 raise (173). Paramount certainly let one get away there, though Ann Sheridan did suffer through a long wait before landing her contract with Warner Brothers in August of 1936.

She remained with Warner Brothers into 1948.

Soon the “Oomph” Girl was born, but more importantly Ann Sheridan became a star playing in classic films such as Angels with Dirty Faces (1939), Torrid Zone, They Drive by Night (both 1940), George Washington Slept Here and, most memorably sharing scenes with Ronald Reagan in Kings Row (1942).

That period of Ann Sheridan’s career is covered in greater detail in this earlier biographical post.