I came upon this full-page ad inside the December 1961 issue of Motion Picture Magazine and thought it was a pretty interesting use of a full-page:

In case it comes out too small in the image, here's the text of the ad above:

In recent months, one of our rival magazines has been blowing its horn as "first and finest for fifty years."

Now, we don't mind a little bragging, but we think it should be based on fact, not fiction! Bragging not based on fact is an outright lie.

Since our competition seems to believe that the truth depends on whoever shouts the loudest, we think it's time somebody set the record straight. So we'd like to throw down the gauntlet and ask them, "first" and "finest" what?

Unlike our rival, we don't believe in making claims we can't back up by any facts. As you can see by the accompanying picture, the first issue of MOTION PICTURE Magazine was published in February 1911, which means we're fast approaching our fifty-first birthday. 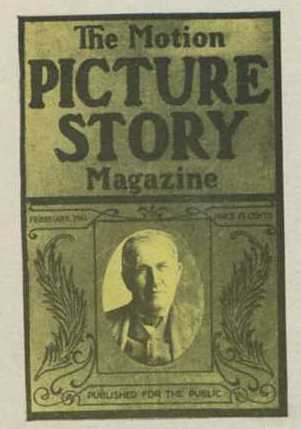 Thomas Edison on the cover of the February 1911 issue of Motion Picture Story Magazine, as shown in the full advertisement above.

Our rival's first issue didn't make the scene until our own MOTION PICTURE had published many issues.

As to "finest," MOTION PICTURE bows to no other where quality is concerned. From our first issue, with Thomas Alva Edison, father of the motion picture camera, on the cover, MOTION PICTURE has brought a quality magazine to its audience. Let others boast of the most. We prefer to boast of the best--the best stories, the best pictures, the best gossip! And we will continue to do so.

One last thing. Our rival is making much of a slogan: "Read it first in IMITATOR!" May we remind you that his claim of being the first and oldest motion picture magazine is false.

It is safest to do business with those who pride themselves on honesty. On that basis, we suggest you read it first and right in MOTION PICTURE.

Yours for the record,
THE EDITOR

Okay, they're right but wow, a whole page for that? Aren't we a little sensitive? Man, they must have been at war with Photoplay for market share at the time. These must have been troubled times for all of the movie magazines because of the TV explosion--not only are movies giving ground to television at this time, but let's not forget that television is blamed for eventually killing off magazines like Life, Look, and the Saturday Evening Post from 1969-72 (before modern reboots). So for a movie magazine TV hit twice as hard, gnawing at the media itself plus the medium covered inside.

You can read all about early Movie Magazines at my Magazine collecting website.