Everything Immortal for September 23 ...

Mickey Rooney has developed into a favorite over the years and I've covered several of his films on this site.

See past articles about the first of the Hardy family movies, A Family Affair (1937), plus a brief look at another entry Andy Hardy's Private Secretary (1941).

Read about Mickey with fellow MGM child stars Freddie Bartholomew and Jackie Cooper in The Devil Is a Sissy (1936) and a teaming with Wallace Beery in an early jockey title for Rooney, Stablemates (1938).

For more Mickey Rooney check out the Immortal Ephemera Site Index page for this living legend. One additional item worth pointing too from that index is this post about a press photo showing Rooney as illustrated by James Montgomery Flagg.

Also born on September 23, Walter Pidgeon in 1897. Another favorite, especially when teamed with Greer Garson. See the Walter Pidgeon Site Index page for a listing of Pidgeon articles found on the site as well as a small gallery of old cards and collectibles. 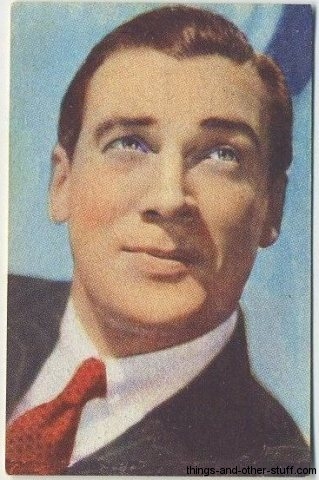 Pointing back today at the colorful 1938 Carreras Film Favourites set of 50 tobacco cards. The great Garbo stares up at us. You can can see the other 49 over on the Gallery page.

One for the DVRs late tonight. Men in White (1934) airs at 4 am EST. It's a medical drama that, due to recent research, I think of as an Elizabeth Allan film, but I'm sure you'll be more excited by top-billed stars Clark Gable and Myrna Loy! The popular Jean Hersholt is also on hand as Gable's mentor.

The What a Character! Blogathon has begun which means the web is getting filled up this weekend with a bunch of brand new looks at your favorite character actors authored by many of the most talented bloggers around!

Eric Blore and Felix Bressart were among the actors I read about Saturday and there will be a whole new batch of posts going online for Sunday as you read this!

The What a Character! Blogathon is being co-hosted by Once Upon a Screen, Outspoken and Freckled and Paula's Cinema Club -- access all of the new articles about your favorite character actors through their websites.

Have a Happy Sunday, Cliff