Don't need the schedule? I've still done my best to include something worthwhile for you down below. Today I reprogram Tyrone Power day on TCM and share the eleven Tyrone Power films I would show your during our own 24 hour marathon.

My first reaction to this schedule had been, and remains, what, no Alice Faye?. But TCM treads into dangerous territory when they decide to salute a 20th Century-Fox star like Tyrone Power because not all of his key films are going to be available for them to show. There are numerous Fox titles amongst the schedule--The Razor's Edge has been a TCM Essentials favorite for some time now--but for the viewer it really seems like pot luck.

After getting over Miss Faye's absence I'm next struck by how strong this schedule remains. I only see three titles I'd consider clunkers and that's a lot better than many of the stars TCM has honored this month! While there are some gems on this schedule my next thought is of all of the great Tyrone Power movies without Alice Faye that are missing! That's an even longer list!

Scanning the Ty Power filmography to get a better grip upon what's here and what's not my conclusion is that Tyrone Power remains very underrated. Not as a movie star but as a movie talent. It's a very impressive list of films. And he managed to squeeze it all in before his tragic death at just age 44.

I won't try to slot the schedule to perfect length. Instead I'll just select the eleven Tyrone Power films that I would most like to marathon in a perfect world where they are all available. (This perfect world exists on my DVD shelf.) Why eleven? That's how many TCM managed to fit into their 24 hours so we'll use it as our magic number. In chronological order:

Yes, it'd be a repeat since they aired it on Freddie Bartholomew day last weekend, but Freddie grows up into Ty after about a half hour. Despite the billing it is Tyrone Power's film and it's the one where we first take notice that this fellow might be a star.

For more about Lloyd's of London please see my article HERE.

It's San Francisco with the Great Fire subbed for the Earthquake and Ty for Clark Gable; Alice Faye for Jeanette MacDonald; etc.

Alice Brady earned an Oscar for Best Supporting Actress in this one as mother to battling brothers Power and Don Ameche. As Mrs. O'Leary she also owns a cow who makes a famed kick. Power is outright crooked for most of In Old Chicago but he's an S.O.B. in possession of Tyrone Power's magnetism and so he's very hard to actually dislike. His first of three with Alice Faye.

I wrote about In Old Chicago some time ago on the site HERE.

Power's next film with Alice Faye shines the spotlight a lot brighter on her as she fronts Ty and Don Ameche's ragtime band in San Francisco and belts out a ton of Irving Berlin classics in doing so. Also features Jack Haley, Ethel Merman, and Wally Vernon, who needs a mention because there isn't anybody in this cast that will leave you wishing for more than he does!

I just wrote about this one earlier tonight and so could easily fill several pages telling you why you should watch. Great chemistry between Power and co-stars Dorothy Lamour and Lloyd Nolan. The top notch cast also includes Edward Arnold as Power's father, a great performance by Charley Grapewin (Grandpa Joad himself), and a brief appearance by the sinister Lionel Atwill (don't trust that guy, Ty!). I mention in my write-up that Johnny Apollo sits perfectly between the movies of the earlier gangster cycle and the coming film noir style. Strong performances all around with Power leading the way.

You know, The Mark of Zorro is not my favorite Tyrone Power movie. In fact if this was a list of my favorites it probably wouldn't make the cut. But I do think that when TCM sat down and decided to give Tyrone Power a day on Summer Under the Stars the entire idea should have circulated around acquiring what has historically been his most popular and best known film, The Mark of Zorro. Sadly it's not included on Saturday's schedule.

Ty Power vs. George Sanders! Power has a very unstable relationship with Frances Farmer, who plays Sanders' daughter and deep down possesses most of her daddy's less desirable qualities. Whipping boy Ty escapes to the sea, forms an alliance with John Carradine and falls in love with Gene Tierney, looking about as gorgeous as you're ever going to see her. Ty comes back to claim his rightful place with the assistance of hammy but lovable Dudley Digges.

There is a lot going on in Son of Fury, a title that I write about in greater detail HERE.

Pirate Power! Based on a novel by Captain Blood author Rafael Sabatini and every bit as swashbuckling of an adventure as the earlier Errol Flynn movie. Power plays the unfortunately named Jamie Boy Waring (trust me, after one too many Jamie Boys are called out you'll start to snicker!) and is buddied up with Thomas Mitchell as reformed pirates in aid of their old boss, Captain Morgan (Laird Cregar), now Governor of Jamaica. Maureen O'Hara plays the girl out of Ty's reach until she's not and our top baddie is ... George Sanders. 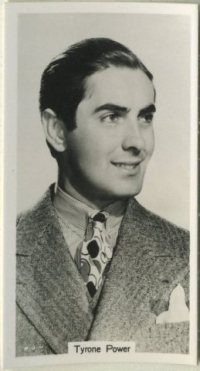 TCM airs The Razor's Edge, yet again, at 8 pm EST as their "Essentials" movie. The Razor's Edge is one of my favorite movies of all time. It is my favorite Tyrone Power movie. That said, TCM always airs it in the Essentials time slot. I want them to show it and I want them to show it at a time where as many people as possible can see it, but I do think it's about time people got to see a different side of Tyrone Power in that prime 8 pm slot. All that griping when I'd still have it on at 10 pm!

Based on a Somerset Maugham novel and featuring Herbert Marshall cast as author Maugham, The Razor's Edge also features fine performances from Power and Gene Tierney, memorable work from Clifton Webb, and Anne Baxter absolutely earning the Supporting Actress Oscar she won for the part of poor Sophie. She's a wild animal before this one comes to an end. While Baxter is wonderful this is still a Tyrone Power film and his Larry Darrell is one of my favorite film characters. Larry rejects society life, even rejects Gene Tierney's Isabel (!), to go on a journey. He is, as Mr. Maugham calls him, " a very remarkable creature."

I have previously written about The Razor's Edge in great detail HERE.

Nightmare Alley seems to be the movie pointed at to show that Tyrone Power can act. I think he's been doing that up and down this list. The film noir classic is definitely one of the highlights of Power's career, which is why I included it here, though to be honest I prefer his work as Larry Darrell in The Razor's Edge or Alec Holmes of Abandon Ship, which follows, to his Stan Carlisle of Nightmare Alley. Power does give one of his best performances as the all too charming self-interested and self-absorbed carny mind reader who gets too ambitious before his eventual fall. I do enjoy Nightmare Alley, just not as much as a few of the other titles on this list. If you're a noir fan you'll likely love this movie, but personally I'm not as wild about many of the classics of that genre as I expect I would be.

Ever since I've seen this one I've been comparing to Lifeboat with, well, with big brass ones.

Abandon Ship aka Seven Waves Away opens with a ship exploding after hitting a mine and its surviving passengers scattered amongst the sea. Our main group of survivors eventually come together in an overcrowded lifeboat. As old pal Lloyd Nolan makes clear, Tyrone Power is going to have to decide who is worthy of living and who has to die if any of them are to survive. Of course they wait until we get attached to everybody before going there but, boy, do they ever go there. Brutal, dark movie that I love.

For my complete article about Abandon Ship go HERE.

Witness for the Prosecution (1957)

Another one that TCM does air. And I cheat with this last pick counting it twice because it includes a film clip of young Power in Jesse James (1939). Jesse James also airs on TCM Saturday but I felt I couldn't include it on my list because, as I mentioned in my August preview, I've somehow never seen it.

Power is Leonard Vole, accused of murder with a bleak outlook. Power's Vole is under our examination every much as he is that of Charles Laughton as barrister Sir Wilfrid, body ailing, razor wit quite healthy. Laughton upsets his nurse (real life wife Elsa Lanchester) to defend Power's Vole against doctor's orders. What we wonder throughout is whether Vole is worthy of the job Sir Wilfrid does for him. Also featuring Marlene Dietrich as Vole's wife, Christine ... or is she? I came to this movie late and its many twists and turns led to an ending which completely startled me.

I went out of my way not to give that ending away when I wrote about Witness for the Prosecution HERE.