The press first took to Anthony Quinn in the Summer of 1937 after James P. Hogan, director of supporting talent Quinn on The Last Train from Madrid, dubbed him a second Valentino. "The guy's got everything," said Hogan. "They have been looking for another Valentino for years. Here he is. He's better looking than Taylor, as manly as Gable."

It's noted in the same article that Quinn first drew attention in Cecil B. DeMille's The Plainsman (1936). It was on that film that he met DeMille's adopted daughter, Katherine DeMille, soon the first of Quinn's three wives. They married October 3, 1937 with the groom reportedly sporting a black eye from a mishap in a recent fight scene. The couple had five children in a marriage that lasted until their divorce early in 1965.

Despite his marital ties, or maybe because of them, Quinn never got his big break at Paramount. The following year the "Second Valentino" spin picked up again with the announcement he was going to star in a remake of The Sheik. That never happened, though Quinn later played in support of Tyrone Power in Twentieth Century Fox's 1941 remake of the Valentino vehicle Blood and Sand.

By that time, away from Paramount with a more successful run at Warner Brother's already behind him, Quinn spoke of his famous father-in-law, stating that "Getting an audience with C.B. when he's working is like getting in to see Winston Churchill during a crisis. And C.B. is always working."

"Everybody there thought anything I got was due to DeMille. I never anything from DeMille--except the time I was kicking against playing a bit role and they called up my father-in-law and asked him to put me in it. I played it, but soon afterward I got away and went to Warner's. Did 'City for Conquest' there and they signed me. This 'Blood and Sand' part may help--it's a good part and I'm hoping. But I've got a lot to learn." 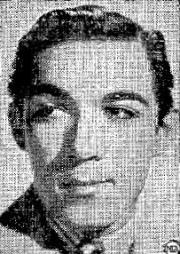 The "Second Valentino" tab was dusted off in late 1942 when Alice Pardoe West wrote that "He is a definite type. Some of his many fans have suggested that he might be a second Valentino."

A fun note from that same year notes that Quinn paid $250 at auction for a suit of armor John Barrymore wore in King Richard III. I don't know how accurate that one is, but I'm a buyer at that price!

Despite a run of strong parts in successful films throughout the 1940's Quinn had yet to attain the heights of stardom.

In 1953 he looked back stating that, "I knew I could continue with what I was doing, but I wasn't getting ahead in the business. I decided to learn all I could about acting." It was a long road for Anthony Quinn and thus far it had been mostly littered with ethnic character parts.

So in the late 40's he took to the stage and made his Broadway debut in The Gentleman from Athens. It was a flop lasting only about a week, but Quinn was singled out by critics for his strong performance and it landed him the part of Stanley in national touring company of A Streetcar Named Desire. This kicked off the next stage of Quinn's career.

... he did not consider him a complete ape he read material into the role that did not lie in the text but, perhaps, between the lines. In two scenes that were pointed out in the review, Quinn managed to change the whole sense of the characterization, change it for the better. His Stanley is softer, at times, and thus far more believable than Williams made him.

Soanes was charmed by Quinn and Streetcar co-star Judith Evelyn over sherry and coffee, but even so he disliked the play: "I can hold diligently to my original opinion that if this be tragedy it is because this pair by the alchemy of fine acting, has converted it from honky-tonk melodrama." He admitted to being in the minority on that opinion!

Quinn so excelled that when Marlon Brando left the Broadway production of Streetcar he was called in to take over the part. Catching up with Quinn a little later Soanes writes that the actor was so sold on Broadway that he moved his family to a farm he bought in upstate New York and waited for the offers to roll in. But they didn't.

Back to the Movies

An ad for ,Black Gold which featured Quinn with wife Katherine DeMille

The movies called and in Spring 1950 he went to Mexico to act in support of Mel Ferrer in The Brave Bulls which released about a year later. Back home, Easterner Quinn's 1951 was filled with guest appearances on early television anthology programs.

Quinn spoke with pride of his heritage when discussing the film: "I'm a Mexican by birth and partly by blood," he says, "and I'm proud of this heritage. When anyone calls me a Spaniard, I get angry. I'm a Mexican. Mexicans are a great people, a fine, warm-hearted, generous people, unfortunately much of the time misunderstood by Americans."

He also told of a backlash in his native country because of some of the earlier parts he played: "People were cool to me and I couldn't understand it. Here I was one of them. I asked a friend and he told me they thought I had betrayed them. I have never played a role like that since. I never will."

Viva Zapata! was, to that point, the crowning achievement of Anthony Quinn's career. His performance earned him the first of an eventual two Academy Awards for Best Supporting Actor.

Wife Katherine had to accept the award for Quinn as he was in Mexico filming The Long Wait starring Gary Cooper. Cooper had won Best Actor for High Noon during those same 1953 Awards and so he was not present to accept either. Best Supporting Actress Gloria Grahame's speech was a brief sentence so that Awards show wound up giving outgoing Best Actress Shirley Booth her moment to shine.

Another winner that evening was Quinn's father-in-law, Cecil B. DeMille, scoring an upset victory for his The Greatest Show on Earth over the expected winner, Stanley Kramer's High Noon. It was noted that two DeMille's accepted statuettes that evening.

Quinn picked up his second Supporting Oscar for his Paul Gauguin in Lust for Life (1956). From there he was finally rewarded with strong leading roles and would be twice nominated for Best Actor in a Leading Role for both 1957's Wild Is the Wind and 1964's Zorba the Greek, a role he'd successfully revive on Broadway in 1983.

Anthony Quinn would continue to work on film until his death in 2001 at age 86.

Here is TCM's own Anthony Quinn Summer Under the Stars mini-site.