You are here: Home / News - Notes / The Development of Rita Cansino – Rita Hayworth in 1930s Newspapers

In honor of Rita Hayworth day on TCM's Summer Under the Stars we go back pre-Hayworth to take a look at 1930's (and earlier!) press coverage of young Rita Cansino as she (and her family) appeared throughout the period newspapers.

"The little girl, Marguerita, that we left in Washington with her grandmother, is much like her mother," said Eduardo Cansino. "We love our work in America--my sister and I have had a very wonderful experience in this country. Of course, we danced a great deal in Europe before coming to America."

A 1922 advertisement featuring The Cansinos at B.F. Keith's. From the Syracuse Herald, November 12, 1922. Rita was only 4 years old at this time, not yet part of the act.

Hubbard Keavy reports from Hollywood, April 8, 1935 that Rita Cansino has signed a seven-year contract with Fox. Keavy adds, "That is, it's for seven years if you overlook the yearly options." Can't overlook those. Rita was let go after just a few bit parts. But there was some fanfare around this signing.

Rita's father Eduardo Cansino said, "I knew if I took Rita by the hand and visited the casting offices we would get nothing but exercise ... So I gave up my dancing school seven months ago and accepted a longstanding offer to dance at the Agua Caliente. Rita was my partner. I knew most of the studio executives visit Caliente from time to time. So nightly we danced and Rita was presented under the most favorable of conditions. She had offers from six studios. When she received one that seemed right, we signed."

The article was accompanied by a large photograph of Rita in a dance pose.

Rita is the focus of this Paddy O'Day review. It opens:

Behind the engaging performance of lovely Rita Cansino, who plays one of the principal featured roles in Jane Withers' "Paddy O'Day," ... is a lifetime of experience in the theatre and a heritage of performing instinct.

Rita's background is mentioned with reference to Eduardo as a "descendant of a long line of famed Spanish dancers," and her mother, Volga Hayworth is noted as a "former Follies beauty." The article again tells how Rita landed her contract at Fox by dancing with Eduardo and even claims Fox signed her without benefit of a screen test.

As of her career thus far:

"Dante's Inferno" introduced Miss Cansino to screen audiences in her first dancing role. Since then she has appeared in "Charlie Chan in Egypt" and "Under the Pampas Moon." But it is in "Paddy O'Day" that she asserts her right to stardom with her dancing, singing and acting in the leading romantic role.

To that cast "Producer Darryl F. Zanuck has added a dash of grace in the persons of Dixie Dunbar and Rita Cansino. These two prominent young actresses are seen in dance specialties at different points in the picture."

As for Rita this little summary backs up the success of Paddy O'Day:

Miss Cansino is the lovely Spanish-Irish girl who made a spectacular debut in "Dante's Interno," and who returned to score even more strongly in "Paddy O'Day."

A Line or Two from Louella Parsons

A line or two: They're renaming the very Spanish Rita Cansino Rita Hayward which is like changing John Barrymore to Jake Cohen--but Columbia seems to think it's a good idea and she's under contract to them.

We'll give Columbia the last laugh on this one.

Irony of the Hair

Besides changing her name from Cansino to Hayworth, Rita's physical transformation has been well documented as well.

Notably her hairline was raised via electrolysis and her "blue-black" hair was turned blazing red.

I found it interesting that prior to her metamorphosis the papers often ran beauty features centered around Rita Cansino's hair.

The clipping to the right dates to September 6, 1935 and uses Rita as an example for "safe removal" of "superfluous hair."

I'm not so sure how well this pitch would fly if you came upon it a couple of years later!

In the second example following below two large photos of Rita were featured above the headline "Filmdom Goes Brunet."

The Grace Grandville article originally appeared in the November 10, 1935 edition of the Oakland Tribune.

Rita Cansino is shown as an example of the bevy of brunette beauties that have taken over Hollywood and even have Jean Harlow considering a change! 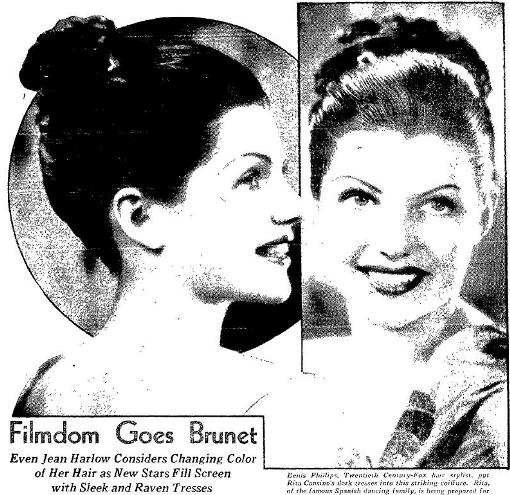 While I thought Gilda should have been front and center at 8 pm as the iconic Rita Hayworth movie I do want to make sure and point you to the 6 pm airing of The Strawberry Blonde. Be sure to catch it today if you have yet to have the pleasure!