Celebrating Van Heflin's day on TCM Summer Under the Stars 2012 by looking back in the old newspapers from 1936 until his death in 1971. What follows forms a loose biography of sort:

"Van Heflin, who came into prominence in 'End of Summer,' the Guild play in which Ina Claire starred and who made his movie A Woman Rebels, now possesses a term contract at Radio."

More of Van Heflin's early days were related by Mark Barron in a 1950 installment of his Broadway column. Recalling Heflin from his own time as manager of the Theater Guild, Barron writes that Heflin was "a Yale graduate, a director in Baker's '47 Workshop at Yale University. And he also directed at the Community Theater in Columbia, S.C."

Parsons interviewed Van Heflin in promotion of MGM's Tulip Time aka Seven Sweethearts (1942). She writes that Heflin started out as a farmer in his native Oklahoma before spending three years at sea as a merchant marine.

"I hated the stage at first," Heflin told her, "and I returned to the sea for a time. I felt as an actor I was a good sailor."

Heflin talks about how he always seems to be playing reporters yet happily assures Parsons that he is a sober one in Tulip Time. She asks if he does not like playing drunks:

"On the contrary, I liked the inebriated youth in Johnny Eager better than anything I have ever played ... That young man interested me. He was so intelligent, with nothing evil in his makeup. He got mixed up with gangsters because of his one failing--his love of drink."

About the RKO contract that Heflin signed in the report above this one:

"I'd rather not talk about it ... I made three awful pictures and I thought I was through with movies forever."

Louella concludes with an unsuccessful plug for Van in the part of Chisholm in Keys of the Kingdom (1944) for Selznick. "I am holding my breath," Heflin said. "I am almost afraid to mention it."

"I loved the role in the book," said Heflin. "Keefer was the fellow making all the cracks about the Navy. But when the Navy censors went through the film script and took away all the humor, the role was nothing.

"I learned a long time ago that an actor is judged by his material--not by his performance."

The role Heflin rejected is the one played by Fred MacMurray in the 1954 film.

As someone who came to the Herman Wouk novel prior to seeing the film--one of hundreds of 40's-60's BOMC editions I inherited from my grandmother many years ago--I have to agree with Heflin. MacMurray is my least favorite part of an adaptation I never took too. The book was a page turner. For me the movie was nothing without Bogie's steel balls and the strawberry incident. Well, Jose Ferrer was good, but that's about as far as I'll go.

Another St. Louis area bus pass as the promotion continued into 1947. This one shows Van Heflin with Joan Crawford in promotion of Possessed.

Charles Witbeck caught up with a bearded Van Heflin in promotion of 1962's special "U.S. No. 1: American Profile" for NBC Television. Unlike many of his contemporaries Heflin's list of credits is not overrun by television appearances in the 1950's and 60's. Prior to this special he had appeared on Dick Powell's show in an episode titled "Ricochet" and had made a few appearances on "Playhouse 90."

"To put it mildly," Witbeck writes, "he has been particular. He believes most shows are really plugs for sponsors and being a movie actor, he prefers to stay far away."

"The only plug in this script is for the beauty of the country," Heflin told Witbeck.

In a humorous aside it's noted that Heflin had previously been working on a film in Italy. He tells Witbeck that, "There's a man in Rome who dubs my voice, Bill Holden's and Spencer Tracy's ... The only thing he asks is that two of us don't appear in the same picture."

Mel Helmer asks "Would you believe Van Heflin as Eliot Ness, shooting as one of those untouchables?"

According to Heflin, "I turned it down ... because I just didn't like it. Naturally, I had no idea of the success it was going to be. I'd have been independently wealthy for the rest of my life."

Heflin also said that Van Johnson was the second choice for the lead in the successful series which ran four seasons, from 1959-63, and famously starred Robert Stack in the part that the Vans each turned down.

From the AP obituary

"Born Emmet Evan Heflin, son of a dentist in Walters, Okla., he was brought to Long Beach, Calif. by his parents when he was 7. In the seacoast town he became fascinated by the sea and soon after high school graduation, hopped a freighter for New York.

"There Heflin met a stage director who ... cast him in the play 'Mr. Moneypenny.'

"It closed after a short run, and Heflin sailed again, spending three years on freighters before he set his heart on a theatrical career.

"He majored in dramatics at the University of Oklahoma and took a masters degree at Yale University's theater department.

"He made his screen debut in 1936 co-starring with Katharine Hepburn in 'A Woman Rebels,' and had his first major Broadway success, also opposite Miss Hepburn, in the 1939 play, 'The Philadelphia Story.'"

Note: On stage at Broadway's Shubert Theatre, Van Heflin played the part that James Stewart would play in the classic 1940 screen version of The Philadelphia Story. In case you were curious, Joseph Cotten played the Cary Grant role at the Shubert.

"The 60-year-old actor died at Cedars of Lebanon Hospital where he had been unconscious since suffering the heart attack June 6 in the swimming pool of his apartment.

"Death came at 6:43 am and was attributed to heart damage from the June attack. He had been in critical condition the entire time." 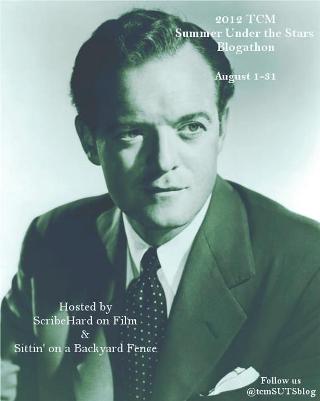 TCM's Summer Under the Stars tribute to Van Heflin somehow misses Shane (1953) over what I imagine to be rights issues with Paramount. But this isn't bad. The schedule, including films such as Johnny Eager (1941), which won Heflin his Oscar as Best Supporting Actor, and the western classic 3:10 to Yuma (1957), made me realize I like Van Heflin more than I had first suspected!