I was contacted some time back by magazine collector Steve Smith, who requested I put together a piece on collecting the Toronto Star Weekly. Steve explained that he's an avid collector of the title himself, especially for the hockey material that the north of the border magazine produced in the 1950's and 60's.

The King inside the Toronto Star Weekly

For me the request was a case of the more you know, the more you've got to learn, as I was forced to profess I'd not handled that specific magazine title and beyond that I had to apologize for not being a hockey fan. I was simply not qualified to do the write-up. I offered Steve the opportunity to submit it himself though, and if it was good I'd put it up on my magazine collecting site--Steve did not disappoint!

If you're not familiar with the Star Weekly yourself, well, Steve's opening paragraph should make clear the type of publication we're dealing with:

I've kept my own words off of Steve's Toronto Star Weekly page, but will add my own thoughts here. For collectors these Sunday paper supplements are a great area not only for potential investment, but to unearth some unique items specific to your collecting niche. I deal a lot myself with some of the earlier supplements specializing in fiction and count the Mid-Week Pictorial among my favorite items to buy for resale. 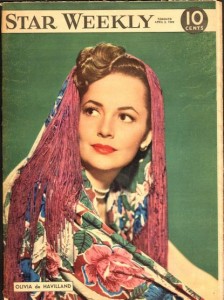 Beyond the rarity of newspaper supplements we're dealing with an extremely condition sensitive collectible. The paper that these were printed on, for the most part, is extremely brittle, more so even than a standard vintage newspaper itself. These are very prone to both heavy toning and chipping at the edges.

I believe these magazine sections of newspapers are kind of like orphan collectibles, often overlooked by magazine collectors and newspaper collectors alike. I really think they present a great opportunity for collectors.

Steve's article is loaded with images from the Star Weekly and packed with information about collecting the title from his unique collecting perspective. A big thanks to Steve for his contribution, both to my site and the hobby in general. If you're interested in doing something like this yourself, please don't hesitate to contact me about it.