In an odd twist, after writing about Jimmy Stewart's portrayal of Monty Stratton in The Stratton Story this past weekend, I received a package in the mail containing seven stills picturing future President Ronald Reagan playing baseball Hall of Famer Grover Cleveland Alexander, himself named for a President, in Warner Brothers' The Winning Team (1952)

. This post is mainly intended to share the images of Reagan as Ol' Pete with you, but Stratton got me in the mood so I sat down and watched The Winning Team earlier this evening.

The Winning Team was a better baseball movie than I'd remembered. The baseball was good and after a bit of a slow start became more prominent as we got deeper into the movie. Where The Winning Team fails the baseball fan though is in time shifting the facts of Pete Alexander's life for the sake of drama.

The Winning Team leaves us to think that after the Cubs put Alexander on waivers he disappeared for a few years engaged on a mighty bender which left him one step shy of Tyrone Power's stint as the geek in Nightmare Alley (1947). In actuality after clearing waivers Alexander was dealt directly to the Cardinals whose manager Rogers Hornsby (Frank Lovejoy in the film) took him on not as a favor to Ol' Pete's wife Aimee (Doris Day), but because he wanted to win.

Yes, Alexander's alcoholism spun out of control and left him grasping for work in Indy leagues and he even wound up pitching for the House of David, as The Winning Team shows, but none of that happened until after his big league career was over. The Winning Team would have you think everything ended happily for Grover Cleveland Alexander, whereas that was not the case at all.

What The Winning Team does cover well is Alexander's defining moment as star of the 1926 World Series versus the New York Yankees. Alexander comes in at the right time, the correct batters show up to face him in the proper order and besides the timing of a Tony Lazzeri long foul ball there's only one other major gaffe which was once again for the purpose of dramatics. However this gaffe was about as major as you could get.

In The Winning Team the 1926 Series ends on, what else, an Alexander strike out. In actuality the 1926 World Series, by all accounts one of the greatest Series ever played, largely because of Alexander's surprising heroics, ended when Babe Ruth was caught stealing. One of the more disappointing ways a game could end, never mind the final game of the season for all the marbles! 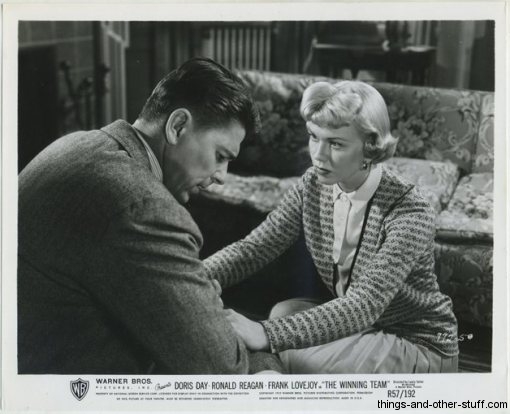 In case you were wondering, Alexander's fainting spells in the movie were Warner Brothers' portrayal of Alexander's epilepsy. I'd imagine anything approaching or suggesting a real epileptic fit would have been too much at the time, so in the film Alexander's fits are shown as dizzy spells which occasionally cause him to pass out and at other times can be brought under control by drawing strength from Doris Day.

The Winning Team did show some courage in showing Alexander's alcoholism, though it was, of course, a very sanitized view of his battle with the bottle. This is not The Lost Weekend.

Some first hand accounts of the Grover Cleveland Alexander's most famous moment, closing out the final game of the 1926 World Series can be found in various baseball literature. One example is in Charles Alexander's biography Rogers Hornsby

, when he tells about the moments leading up to Pete being called into the game:

(Flint) Rhem and Alexander were sitting in the bullpen; neither had been warming up. Alexander had celebrated in his usual fashion the previous night and, by Rhem's account, was dozing with a pint of whiskey in his pocket. Seeing Hornsby's signal, Alexander grinned, 'staggered a little, handed me the pint, hitched up his britches and walked straight as he could to the mound.' Hornsby walked out beyond the infield to meet Alexander and explain the situation: two out, bases loaded, Lazzeri up. 'Do you feel all right?' Hornsby asked. 'Sure, I feel fine,' said Alexander. 'Three on, eh. Well, there's no place to put Lazzeri, is there. I'll just have to give him nothin' but a lot of hell, won't I?' (119)

There are a couple of first hand stories about Alexander in the Lawrence J. Ritter classic The Glory of Their Times

as well. Bob O'Farrell, the Cardinals starting catcher during that Series, recounts:

I don't believe Alex was much of a drinker before he went into the army. After he got back from the war, though, he had a real problem. When he struck out Lazzeri he'd been out on a drunk the night before and was still feeling the effects ...Well, Alex didn't really intend to take a drink that night. But some of his 'friends' got hold of him and thought they were doing him a favor by buying him a drink. Well, you weren't doing Alex any favor by buying him a draink, because he just couldn't stop ... So in the seventh inning of the seventh game, Alex is tight asleep in the bullpen, sleeping off the night before, when trouble comes (252).

I will say that during this key moment in World Series history Warner Brothers did have Alexander fast asleep in the bullpen, and while they didn't specifically say he was drunk or even hung over, Reagan did play Ol' Pete as more than a bit groggy during the sequence. I get the feeling that for the sake of the kids viewers are supposed to believe Old Alex was ancient, which he was--in baseball years. Alexander was 39 years old at the time of the 1926 World Series.

(And at age 40 Alexander would have one great last hurrah of a season winning 21 games for the Cardinals against 10 losses with a 2.52 ERA. He wasn't that bad at 41 either! In his career Alexander won a total of 373 games, tying him for third all-time with Christy Mathewson.)

The Winning Team isn't so much over-sanitized as it is rearranged. According to the fine biography of Grover Cleveland Alexander by Jan Finkel at SABR, Pete would be traded back to where he started in Philadelphia and be cut after 3 decisions in 1930. That's when life got pretty bad: sanitariums; he'd previously divorced Amy in 1929, though they remarried in 1931; then Pete took on what Finkel calls "an odyssey of odd jobs" which included the geek-type moment of The Winning Team where Alexander would recount his baseball glories at a flea circus.

Alexander was elected to the Baseball Hall of Fame in 1938, but Finkel quotes him from 1944 saying "I'm in the Hall of Fame, . . . and I'm proud to be there, but I can't eat the Hall of Fame." The Alexanders would divorce again. Pete had a heart attack in 1946; hurt himself when he fell during a seizure; developed cancer and had to have his ear amputated. Grover Cleveland Alexander died in 1950 at age 63.