As a huge baseball fan I'm typically not a fan of baseball movies. They usually wind up annoying me, whether it's a baseball life being adjusted to fit a story better or the actual sport not being presented properly in the film. While The Stratton Story isn't perfect it holds a special spot for me as a movie I've been acquainted with since childhood and one I consider second only to The Pride of the Yankees (1942) in the ranks of movies about my favorite sport.

At heart The Stratton Story is as much of a movie romance between Jimmy Stewart and June Allyson as The Pride of the Yankees was between Gary Cooper and Teresa Wright. 1949 is a little late for Jimmy Stewart to be playing a 22 year old kid, as Stratton was at the time of his debut with the Chicago White Sox in 1934, but Stewart manages to bring enough of his trademark naivete to the role to make us forget that he's actually 40.

It's classic Stewart when his Texas bumpkin is mesmerized by the slot machine inside a barbershop just after arriving in L.A. Seeing a hardcore gambler drop a quarter into a machine that spits four more back at him, Stewart's Monty Stratton asks, "You get four for one?" The gambler confirms and smirks in the background as another machine eats two bits from Stratton. But the third quarter Stratton drops is the lucky one that pays out a jackpot. "This is a better machine than yours," Stratton says as he stuffs fistfuls of loose change into his pockets. Later, on his first date with Allyson's Ethel, the girl he'll marry, Stewart is jingling and jangling so much that Ethel asks him what's going on. After Stratton's story Ethel mentions that he has a future as a gambler if baseball doesn't work out for him, but Monty says he's all done gambling. "I found out what it was like to lose and what it was like to win. Why keep at it?"

Ethel's pretty disappointed in her blind date at first, but starts to see something in Stratton before the night is over. Allyson's character is initially quite brusque with Stratton, but once she warms up to him she turns into the very sweet June Allyson we're used to. She has a fun scene where she reads the newspaper report of Monty's far from auspicious debut with the Sox and she turns it into a good-natured jibe about how historically terrible Monty was. This bedroom scene with Stratton firing balled up rolls of socks at her in protest in one of the more charming scenes we see of the couple together. 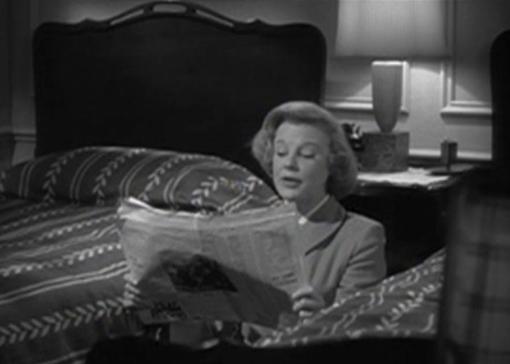 Despite the tragedy of Monty Stratton's career, most of The Stratton Story deals with his rise to the big leagues from the sandlots of Wagner, Texas. It's there that a down and out Barney Wile (Frank Morgan, sans mustache) discovers him and spends the winter training Monty under his mother Moorehead's watchful eye. As is usual in these types of movies, Monty's mom doesn't see any value to her son's wanting to play a game rather than tend the farm, but her stone facade soon cracks as she gives Monty five dollars from her savings for his trip to Los Angeles to try out.

Upon arriving at the White Sox camp in California it's immediately clear that Morgan's Barney isn't the great pal of Sox manager Jimmy Dykes that he presented himself to be. Through Dykes we find out that Barney boozed himself out of the game and burned his bridges when he did so. But as Dykes is kicking Barney and Stratton off the field he notices Stratton has some talent and holds them up to play a little catch with him. Stratton makes the team out of camp, but is shelled in his debut and sent down to the minors for some seasoning.

Dykes was a former ballplayer and player-manager of the Sox when Stratton actually played with them. He managed the White Sox for 13 years, though 1946, and would manage several other teams in a career that extended through 1961. As an actor, he's a great baseball man, but it's no surprise he wouldn't pop up in any other movies.

Still, Dykes doesn't embarass himself, nor does New York Yankees slugger Bill Dickey, who also played himself in The Pride of the Yankees. Dickey was elected to the Baseball Hall of Fame in 1954. Dickey had retired as a player himself by the time of The Stratton Story, having lost most of his post-peak years to service in World War II though there was a brief return to pinstripes as player-manager in 1946. Dickey jacks a homer off Stratton as part of that attrocious debut and later has some friendly chit-chat with Monty both at a restaurant and in the ballpark.

Jimmy Stewart handles himself well in the scenes he's called upon to play ball. As a pitcher he has a believable wind-up and delivery, which is much more than I can say for William Bendix in the embarrassing The Babe Ruth Story released the previous year. The integrity of baseball only wobbles a couple of times in The Stratton Story, specifically during the way the manager handles Stratton during his comeback game with the Southern All-Stars and more generally from Frank Morgan's dialogue which isn't terrible, but can induce a cringe from the baseball fan every so often.

James Stewart on the mound as Monty Stratton

I guess the incident that The Stratton Story hangs on would usually be considered the type of spoiler I would tip-toe around, but in the case of Monty Stratton what happened actually cost him both his leg and his career, despite an inspiring minor league comeback. Stratton had compiled an excellent 36-23 record during his time with the White Sox, but lost it all when he went out rabbit hunting one day during the off-season. I posted an article a couple of years ago that included the original period coverage of Stratton's accident from The Sporting News in 1938. In an article titled "Statton's Career Ended by Tragedy," they wrote:

... Stratton took his automatic and went from his mother's home with the promise he'd bring back some rabbits, or, failing in that, would at least get some practice in marksmanship in a nearby woods. He was walking about a half mile from the house, the pistol in a belt holster, where he had replaced it after taking a shot at a rabbit. As he walked along in a thicket the firearm was discharged, the bullet entering below his hip and lodging near his knee ...

Stratton on the comeback trail

It's no surprise that Jimmy Stewart enters a dark period in The Stratton Story after the accident with Stratton never more cantankerous as he was shown during the scene in which his son takes his first steps. With Ethel and his mother celebrating the landmark moment, Stratton cracks "What's so wonderful about it, he's got two legs, doesn't he?" before storming out of the room.

But Ethel brings Monty back a ray of light after resurrecting an old ball and mitt during some spring cleaning. We soon witness Monty's comeback attempt culminating on screen with his appearance at an independent league All-Star Game, but actually even more successful in real life when Stratton would win 18 games for a team in a Class C league.

According to the 1982 obituary published by the A.P., Stratton retired from semi-pro ball to head to Hollywood and advise on Sam Wood's film. The end product seems to show that Sam Wood kept an open ear to Stratton's input, as the baseball parts of the story seem to stick to the actual biography and, as I've already mentioned, don't embarrass the game itself either. What's more The Stratton Story won an Oscar for Best Motion Picture Story and was the Photoplay Gold Medal Award winner for 1949.

The Stratton Story is a fine baseball movie that will be enjoyed by fan and non-fan alike.