You are here: Home / Movie Reviews / A Dispatch from Reuters (1940) – Plus the Real Reuter vs. Edward G. Robinson

As a big fan of both biopics and Edward G. Robinson I don't know how I managed to miss this one until now! Wikipedia's page on Reuters includes three brief paragraphs under the heading History: Beginnings which provide a pretty tight summary of the movie A Dispatch from Reuters. As they're the only section of the Reuters page which is not heavily footnoted, perhaps that's all it is. But having a look at the Company History on Reuters own website, it appears the movie didn't stray too far from what is supposed to have happened. 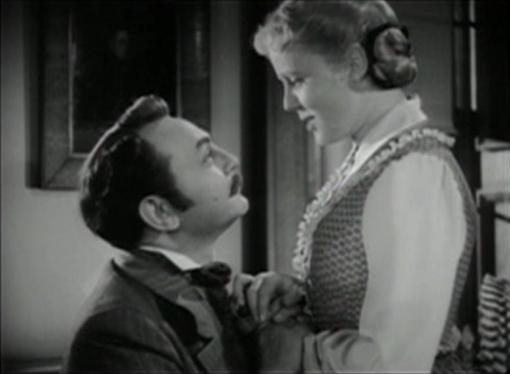 Edward G. Robinson as Reuter and Edna Best as his wife, Ida.

After a brief opening set in 1833 with Dickie Moore as the young Reuter, time passes to 1849 and Edward G. Robinson takes over the part. From here A Dispatch from Reuters unfolds in two distinct parts, each featuring Robinson, Edna Best as Reuter's wife, Ida, and Eddie Albert as his "best friend and worst enemy," Max, who works with Reuter from the start.

The first section of the film finds Reuter perfecting his system of reporting over long distances through the use of homing pigeons. His goal is to plug the gap in telegraph wiring between Brussels, Belgium and Aachen, Prussia. This was the most enjoyable portion of the film with its quaint backdrop of Aachen and the chance to get to know a host of characters, many of whom are left behind after Reuter's early successes and subsequent move to London. 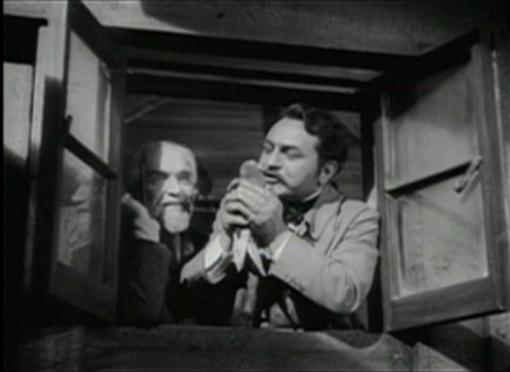 Albert Basserman is Gellar, Reuter's fatherly backer in the Aachen office who also plays matchmaker for Reuter and Ida. Ida's father, Dr. Magnus, is played by Otto Kruger. Reuter has his first success when his pigeons prove the most efficient way to warn the Doctor that he's about to inadvertently poison a group of patients. While the greater good keeps Reuter from spreading word of this lifesaving moment, Magnus more than helps him get his start by promoting the profit making potential of Reuter's stock quotes by air to the local businessmen. That group is led by the banker Bauer, a self-interested and sneaky Gene Lockhart. It's funny, I always think of Lockhart first and foremost as kindly Bob Cratchit in the 1938 version of A Christmas Carol, but he sure did manage to play a whole host of undesirables throughout his career!

Gene Lockhart after some bad news

A big theme of A Dispatch from Reuters is progress and it is progress which nearly sinks Reuter when a telegraph wire is finally run between Brussels and Aachen rendering his pigeon service largely obsolete.

While in France Reuter has a brainstorm at a newsstand and breaks-up buddy Max's flirtation with a couple of French girls to explain his idea of sending actual news over the telegraph wire. The Reuters settle in London. Gone are Basserman, Kruger and Lockhart, replaced largely by Nigel Bruce as Sir Randolph, a wealthy benefactor who remains friendly with Ida and Reuter throughout the second half of the film, and Delane (Montagu Love) of the London Times, the key newspaper which Reuter must land in order to gain the hold his news service requires.

Reuter grows his news service until the Anglo-Irish Telegraph Company tries to cut him off at the knees by delivering the news on their own wire two hours faster than Reuter had been supplying his outlets. Reuter must come up with one last bit of genius in order to regain the patronage of the European newspapers. His bold stroke coincides with the assassination of Abraham Lincoln overseas and very nearly destroys him.

The main goal of Edward G. Robinson's Reuter throughout A Dispatch from Reuters is the very modern idea of making the world a smaller place and bringing people closer to one another by doing so. The more that people from distant places can know one another the more knowledge the world knows and as Reuter declares, knowledge is truth and truth is freedom. This is a seventy year old movie then covering a topic then already 80-90 years in the past. As we communicate instantaneously with one another all over the world today A Dispatch from Reuters felt all too modern in framing the early steps, seeming so backward now (pigeons!), towards the current ease and speed of communications.

I'd imagine in the decades that have passed since the 1940 release of A Dispatch from Reuters it has only become more relevant with each step forward taken by technology.

Edward G. Robinson is typically fantastic as Reuter. He's meek and distracted at his start. When he loses his temper with Dr. Magnus he listens to the Doctor and Ida's response before explaining that he's not mad anymore and when he's not mad he can see other people's problems. Reuter is driven but reasonable. 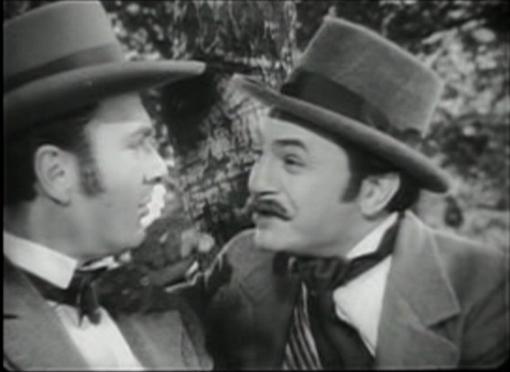 He obsesses over his pigeons to such a degree that Geller has to tell him that Ida is interested in him. He suffers Max's incompetence out of friendship, but even when he's had enough and scolds Max by letter, his careful wording is only enough to amuse his laid-back friend. But the people around him, eventually even Max, tend to come through for Reuter because they believe in him and he continues to give them reason to do so.

Robinson's Reuter is the obsessed entrepreneur presented as man of progress. The only moment he even imagines quitting is when Ida informs him that she's pregnant, but she quickly quashes this flash of financial conservatism. When his business is threatened by Anglo-Irish Reuter doesn't fold, he gets angry, vows to never quit and tosses their settlement offer into the fire, likely against his better judgment as Sir Randolph points out. Robinson grows with Reuter as the character develops.

Apparently I'm familiar with a slightly older Edna Best from a pair of outstanding movies from 1947, The Late George Apley and The Ghost and Mrs. Muir, but A Dispatch from Reuters is the first time I actually noticed her. Ida's greatest contribution comes early in Dispatch, when she goes to Brussels and straightens out the mess Max has made. After that she sort of disappears into an easy chair as we watch her husband make the world a smaller place.

Eddie Albert is also pretty invisible as Max. The character held some potential early on when as loafer-poet you figure the only reason Reuter kept association with him was to have a warm body at the Brussels outpost. As Max matures and is given greater responsibility he actually handles it, leaving him to disappear. The part of Reuter's closest confidant is taken over by Nigel Bruce from the first time we see his Sir Randolph, at which point Reuters borrows a thousand pounds from him.

Some of Max's poetry slogans

A Dispatch from Reuters was a 1940 Warner Brothers release directed by William Dieterle, who'd just prior worked with Robinson in Dr. Ehrlich's Magic Bullet. Before that Dieterle directed the Paul Muni biopics The Story of Louis Pasteur (1936), The Life of Emile Zola (1937), and Juarez (1939). Likely due to the nature of the biography Dispatch can feel a little uneven once locales shift and we lose half of our characters, but Robinson single handedly carries the 90 minute film well enough to not make us miss anybody too badly.

A busy month would see Josaphat move to London, October 29, 1845, where he was called Joseph Josephat upon his arrival. On November 16, Josephat, born to Jewish parents, would convert to Christianity and take the name Paul Julius Reuter. One week later he married Ida Magnus in Berlin.

The actual Paul Julius Reuter at age 53 in 1869. Painting by Rudolf Lehmann.

Reuter's activities in publishing some political material caused him to flee Germany for Paris after the failed Revolution of 1848.

It was April 1850 when he founded his pigeon post with Geller in Aachen to deliver stock quotes and other information via homing pigeon between Aachen and Brussels. While A Dispatch from Reuters seems to get the timing and particulars of the pigeon post correct it's worth noting that Ida is already his wife of five years. Reuter's Aachen to Brussels connection was the only expedient way for news to flow between the world capitals of Berlin and Paris.

Again, as A Dispatch from Reuters shows us, Reuter's area was finally closed by telegraph line in 1851, at which time he moved back to London. While our film allots a great deal of time to Reuter's Aachen to Brussels pigeon post in actuality it was only in service for a single year.

In 1857 Reuter was naturalized as a British subject. One year later he would add the London Times and several other English newspapers as subscribers to his Reuters News Service. Britain's telegraph connection to the rest of Europe came through the English Channel with the link extended to Cork, Ireland in 1863. This would be cause Reuter's last great challenge in A Dispatch from Reuters, when the Anglo-Irish Telgraph Company usurps his press connections beating Reuters reports by a full two hours.

Reuters was in fact first to bring news to Europe of President Lincoln's assassination, a key scene in the movie which is in actuality the Dispatch referenced in the film's title. Here, our movie ends.

Reuter in 1871 would have a barony conferred upon him by a German Duke. He'd retire in 1878 at age 61 due to failing health but would live just over another twenty years dying at age 82 in Nice, France, February 25, 1899.

Movie cards and collectibles inside the Immortal Ephemera Store.

Note: As of this time I cannot find A Dispatch from Reuters available for purchase in any format. I saw it on Turner Classic Movies and TCM reruns it from time to time. I wouldn't be at all surprised if it became a Warner Archives release sometime soon.