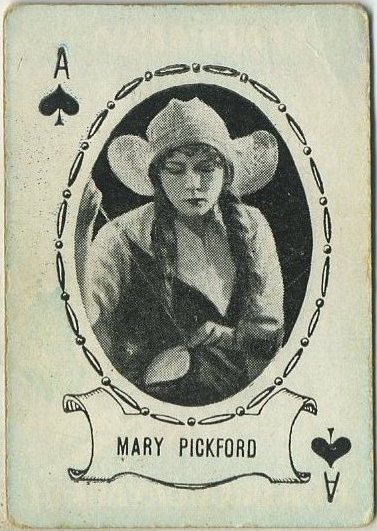 From Brazil. Because of the text on back I had originally thought these cards were from Uruguay, but it appears that "Rua Uruguayana 91" is instead referring to a street address in Brazil where Granado & Sons (De Granado & Filhos) was located.

Chico Boia, aka Roscoe Arbuckle, appears to be the Joker. The card has no suit or number, though the one shown in our gallery has a suit and number handwritten at two of the corners.

Keys to this set are the Arbuckle "Joker," plus cards of Mary Pickford, Douglas Fairbanks, Theda Bara, and Max Linder. The deck pictures mostly American based film stars with several European stars included as well.

Just click on any image to open to full size and from there you can scroll through the entire set. The entire deck of 53 cards is shown along with an example of the reverse side and an info card with Spanish text. Text listing of contents follows below.

Note: There will be no mailing tomorrow or on any Sunday … END_OF_DOCUMENT_TOKEN_TO_BE_REPLACED

Sure, a bit of an obscure choice—man's been dead for ninety … END_OF_DOCUMENT_TOKEN_TO_BE_REPLACED

Hey, why not start this out with two posts! More on what … END_OF_DOCUMENT_TOKEN_TO_BE_REPLACED

Laurence Olivier (1907-1989) English actor is one of the … END_OF_DOCUMENT_TOKEN_TO_BE_REPLACED