Each card measures approximately 2-1/2" X 3-1/2" and was issued with a gold gilt around the edges of the card.

A different theatrical performer is shown on each of the 53 playing cards in this deck.

An example of the reverse side of all 53 cards is shown immediately to the right.

Some would make the transition to film: May Robson, Marguerite Clark, Dustin Farnum, Tyrone Power, Sr.

Some are forever known for their work on the stage: David Warfield, Mrs. Leslie Carter, William Gillette, Julia Marlowe.

The deck of 53 playing cards includes a nice mix of performers. Each is shown in the gallery and a text checklist is available below that.

The following gallery includes images of the front of all 53 cards from this 1908 deck of stage star playing cards. Text checklist follows below.

Sure, a bit of an obscure choice—man's been dead for ninety … END_OF_DOCUMENT_TOKEN_TO_BE_REPLACED

Laurence Olivier (1907-1989) English actor is one of the … END_OF_DOCUMENT_TOKEN_TO_BE_REPLACED 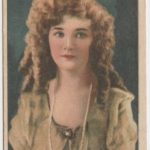