You are here: Home / Archives for vitaphone

A complete biography of Woo Woo! man Hugh Herbert that reestablishes many writing and directorial credits previously given to F. Hugh Herbert and reveals his wife, Rose Epstein, and co-star, Anita Pam, were the same person. Hugh’s early vaudeville days dating from 1911 are covered as well as his earliest work at the film studios. 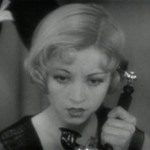 Alice White stars as Dixie Dugan in First National’s SHOW GIRL IN HOLLYWOOD (1930), a behind the scenes movie musical depicting the Vitaphone process and including a stand out performance by former silent screen star Blanche Sweet.