You are here: Home / Archives for RKO (Pathe)

A look at the very specific time and place of King Kong’s March 2, 1933 premiere at Radio City Music Hall and the Roxy in New York City.

The public was air-minded when RKO released Men Against the Sky (1940), an exciting “B” film starring former “Ace of Aces” Richard Dix, with Kent Taylor, Wendy Barrie, and Edmund Lowe. A look at why the public was so fascinated by flying at that time, and how the four stars and other elements of the film worked so well together.

A grouping of over a dozen photos from the time of The Magnificent Ambersons (1942) but in promotion of actress Dolores Costello and not the film. Costello is pictured on her own and with children DeeDee and John Drew Barrymore.

Richard Dix is a harmless playboy until trouble calls and with the assistance of Boris Karloff and Paul Hurst he becomes The Reckoner in RKO’s The Public Defender (1931).

RKO’s His Greatest Gamble (1934) successfully offers Richard Dix one of his most dramatic roles as the carefree father of a girl whose mother keeps her under the strictest control. Also starring Dorothy Wilson, Erin O’Brien-Moore, Bruce Cabot and Edith Fellows. 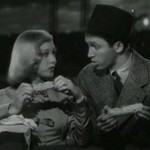 RKO’s Vivacious Lady doesn’t have much of a story, but Ginger Rogers and James Stewart are in love, so who cares? A look at the comedy classic directed by George Stevens for the James Stewart Blogathon.

Helen Twelvetrees stars in pre-Code sizzler Millie (1931). Millie leaves her husband after she catches him cheating and she puts monogamy behind her once her boyfriend is caught with another woman too. Can Millie be an independent woman in 1931 and protect her daughter from an even more perilous relationship?

Lester Cohen adapted his own novel Sweepings for RKO in 1933. It was remade as Three Sons in 1939. The story is about a retail king and his family, but the focus of this article turns to Helen Mack’s explosive Christmas Eve scene with additional details about her character filled in from Cohen’s novel.

A complete biography of Woo Woo! man Hugh Herbert that reestablishes many writing and directorial credits previously given to F. Hugh Herbert and reveals his wife, Rose Epstein, and co-star, Anita Pam, were the same person. Hugh’s early vaudeville days dating from 1911 are covered as well as his earliest work at the film studios.