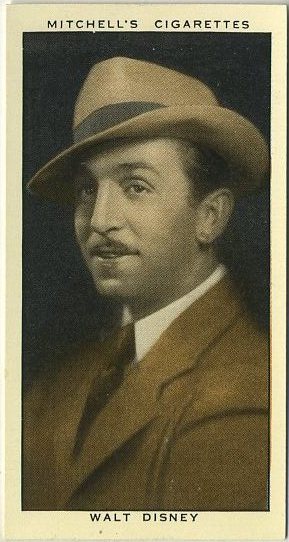 Not a movie set, but a set covering general British popular culture of the time and including figures from the worlds of royalty, politics, and especially sport; plus an heiress, a bandit, a set of famous quintuplets and plenty more, alongside the few movie cards in the set.

There are 11-1/2 cards of entertainers in the set, numbered 16-26 and including Vivien Leigh, Walt Disney, Fred Astaire and Ginger Rogers, Will Rogers and Shirley Temple. The "1/2" card would be number 39 picturing Helen Vinson with her husband, tennis pro Fred Perry.

The key to this set is Walt Disney with other popularly collected cards including Joe Louis, Astaire & Rogers, Shirley Temple, Lawrence of Arabia, Sir Malcolm Campbell and the Dionne Quintuplets.

Despite the presence of the movie cards I think my favorite is card #50 Spada, the Corsican Bandit. It's not every tobacco card that reports its subject was recently guillotined! The closing line of text is a classic as well: "Women were fascinated by him, and he is said to have made love as lightly and callously as he took life."

This set follows the fifty figures featured in Mitchell's "A Gallery of 1934" set issued the previous year.

Available for purchase in the Immortal Ephemera Store:

Just click on any image to open to full size and from there you can scroll through the entire set. Both sides of all 50 cards are shown. A text checklist follows the gallery.

Note: There will be no mailing tomorrow or on any Sunday … END_OF_DOCUMENT_TOKEN_TO_BE_REPLACED

Thanks to those who wrote to point out Barbara Stanwyck's … END_OF_DOCUMENT_TOKEN_TO_BE_REPLACED

Priscilla Dean (1896-1987) A forgotten star with a foggy … END_OF_DOCUMENT_TOKEN_TO_BE_REPLACED