The following text is what is printed on the back of the above premium. I've added spaces for new paragraphs for better online reading, but all text remains the same.

Given the source of the premium, Motion Picture Magazine, this is basically the studio bio for Walter Pidgeon up through the time that this item was printed, circa 1946.

He's a soaring Pidgeon whose film stock is zooming so high that he's among the first ten movie raves. This is such a surprise to Walter that he still can't believe it. For WALTER PIDGEON, frankly in his forties, never dreamed that he would take his place among the young bloods as a pulsehopper.

He's been in pictures since 1926 and he thought that at this period of his career he was all set for settled-down roles, with no hanky-panks about the love stuff. It's really the oddest thing, for it was his portrayal of the older man in It's a Date who set Deanna Dubin's heart twitterpattering but who married her mother, that made girls Pidgeon-conscious. They sighed over his urbane manners, his rugged good looks, his casual manners.

As a matter of fact, when he thinks back to it, Walter is even surprised that he is an actor, for nothing in his early life is pointed to such a career. He was born on a September 23rd in St. John, New Brunswick, Canada. His earliest ambition was to follow in his grandfather's footsteps and be a sea captain. His nearest approach to this career, however, was sailing on the St. John River and the Bay of Fundy. When war broke out, Walter enlisted in the Canadian Army and when it was over he settled down, married and entered the brokerage business in Boston.

He had a fine baritone voice but used it only at informal parties. His talents had attracted the attention of Elsie Janis, but he kept that side of his life on an amateur basis. "I'm not exciting enough to be on the stage," he used to say. Moreover, injuries sustained in the war put him on crutches for a time, which made the prospect of stage work impossible. Then came reverses--the death of his wife, financial misfortunes and the return of the old trouble in the leg. He wired Elsie Janis that he was in the market for professional singing. She wired back that he was to come immediately to New York City.

At the first performance Walter was seized with such an alarming case of stage fight that he couldn't go on. This was cured when Miss Janis told him that either he'd get out on the stage of the second performance or he'd just plain git! He went on. He was what audiences wanted--a tall, handsome he-man with a thoroughly masculine baritone and a thoroughly masculine manner on the stage. He was leading man in several Broadway musicals and it was at one of these that Joseph M. Schenck saw him and signed him up.

His first six months in Hollywood were gloomy. The picture he was supposed to make was shelved and he sat around, drawing a salary but doing nothing. Then one afternoon he was invited to a party at the home of the late Jimmy Cruze. "You know," said Cruze to him, "you're the type of guy I shouldn't like. You don't drink, you don't smoke a pipe and you sing 'The Rosary,' which has always been a jinx tune to me. But I think you're okay. How would you like to play in one of my pictures?" So Walter finally saw the light of a camera in Cruze's picture, The Mannequin.

Today he doesn't have to worry about getting the work. With each picture his popularity grows, and now he's one of the most sought-after stars in Hollywood. He has since remarried but the Pidgeons don't go out very much, so pretty, blond Mrs. P. doesn't cut much of a swathe in Hollywood circles. They like to entertain at home and the only time they go out is when there is a concert in town. He likes women with charm, dignity and worldliness and his wife fills that bill.

In private, he's pretty much like the Walter Pidgeon of the screen. He likes knockabout tweeds, he's a nut about hunting and he's the type of man who likes dogs--big dogs. He has 14 of 'em. He feels that gratitude is a fine trait because it includes humility, fairness and appreciation of one's fellow men. He has a passion for oysters and likes them so much that once, returning to Hollywood from new York, he took a long trip though the South just to load up on Oysters Rockefeller in New Orleans. Although he admittedly gets quite a kick out of reading about himself, he doesn't think he's good material for interviewers.

His new picture is MGM's Weekend at the Waldorf. 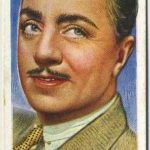