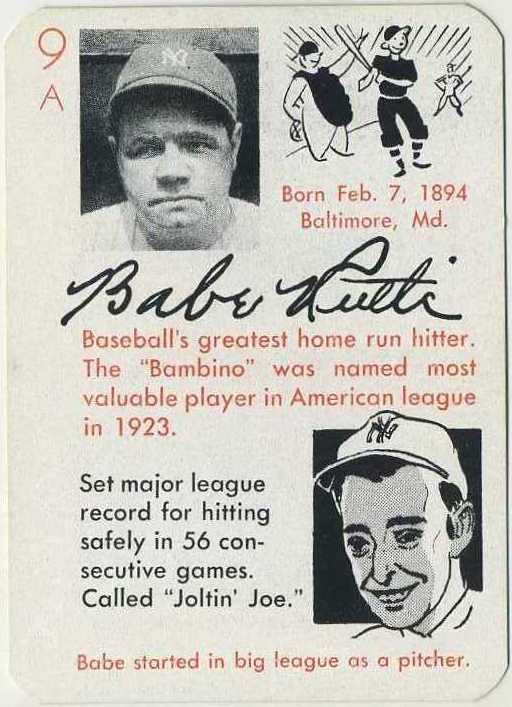 Issued by The Leister Game Company of Toledo, Ohio.

Not strictly a movie issue but all encompassing of mid-1940's American pop culture including sports stars from Joe Louis to Red Grange to Babe Ruth; politicians such as Franklin Roosevelt; military figures such as Eisenhower and MacArthur; and many others. Movie stars and related film figures are well represented.

The 52 game cards are numbered 1-13 and 1A-13A with famous people paired by similar occupations.

For example, the two cards numbered 9A picture Babe Ruth and Joe DiMaggio; 3A are Clark Gable and Gary Cooper; 4A are Frank Sinatra and Bing Crosby; even cards #13, Ted Husing and Bill Stern, picture men from similar occupations: sports announcers.

The Autographs Card Game is four games in one and so each card is filled with a good deal of information for playing the various games.

Also included in the Autographs Card Game set is a card of Sgt. Edwin A. Rowlands, who was the world's foremost autograph collector at that time. The descriptive Rowlands card mentions he has a collection of real autographs numbering over 3,000 pieces that he has insured for $12,000. Sgt. Rowlands was featured in numerous mainstream American periodicals and is credited with collaborating with Reginald S. Leister in creation of the Autographs Card Game. In service since December 1942, Sgt. Rowlands planned to lecture on "The Value of a Hobby" upon his discharge.

Each Autographs Game Card is also emblazoned with a bold facsimile signature of each of the famous persons, presumably copied from Sgt. Rowlands own private collection.

The reverse side of each card is the same: The word "Autographs" in bold script over a white background with orange frame.

I've included an enlarged copy of the entire Autographs Card Game rule book at the end of the complete gallery following below. You can read in detail about any of the four game variants suggested by the Leister Game Company. I did so and concluded that you probably wouldn't play with this deck more than once or twice.

All famous persons included in Autographs, A Card Game of Famous People depict living subjects with the exception of Knute Rockne, who died in 1931 and three others who appear to have died after the initial production cycle began for the card game: Irvin S. Cobb, who died in 1944, and President Franklin Delano Roosevelt and war correspondent Ernie Pyle, who both died in 1945.

Babe Ruth, who was still alive when the game was issued, and Joe DiMaggio, not only living but on the cusp of returning from service to resume up his Hall of Fame baseball career, are the key cards to this set. Joe Louis, also still active, is another key card to the Autographs Game Set. The sports stars will be in greatest demand with a premium on those athletes who were still active. Among the non sports performers the early card of Frank Sinatra is of special interest as is the cowboy pair of 13As, Gene Autry and Roy Rogers.

A very interesting and varied game set including 52 of America's most beloved pop culture icons of the mid-1940's. 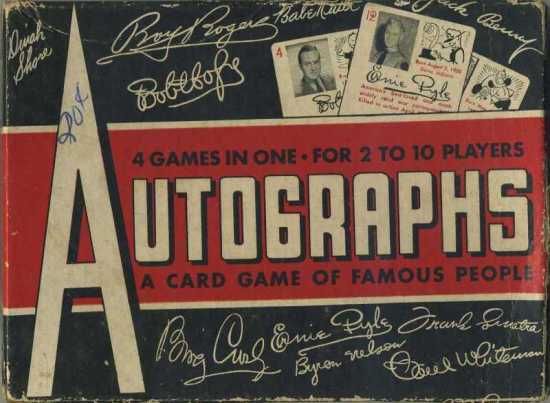 None at this time ... check my eBay listings for available "Autographs" cards

Note: I'm running behind on a few things—including email … END_OF_DOCUMENT_TOKEN_TO_BE_REPLACED

Sure, a bit of an obscure choice—man's been dead for ninety … END_OF_DOCUMENT_TOKEN_TO_BE_REPLACED