How neat are these? This Shots from the Films set from Ogden's is composed of beautiful caricature images credited to Alick P.F. Ritchie on the front of each card. Yes, some are a little cheesy, the Tarzan card for instance, but others are really sharp to look at including Escapade, She, Riff Raff and pretty much most of the set!

This page is intended to provide you will all of the possible tools required to view, research, collect, and even purchase the cards in this set, as well as the classic film stars included in this set.

The following gallery includes images of all 50 cards from the 1936 Ogden's Shots from the Films set of tobacco cards. Text checklist follows below.

1936 Ogden's Shots from the Films Checklist

1 - Herbert Marshall, Sylvia Sidney and Phillip Reed in Accent on Youth
2 - ZaSu Pitts and Hugh O'Connell in The Affair of Susan
3 - Douglas Fairbanks, Jr. and Gordon Harker in The Amateur Gentleman
4 - Fredric March and Olivia De Havilland in Anthony Adverse
5 - Bing Crosby and Ethel Merman in Anything Goes
6 - Edward G. Robinson and Miriam Hopkins in Barbary Coast
7 - May Robson, William Benedict and Billy Burrud in The Baxter Millions
8 - Gordon Harker and Will Hay in Boys Will Be Boys
9 - Eleanor Powell, Vilma and Buddy Ebsen in Broadway Melody of 1936
10 - Emlyn Williams and Dolly Haas in Broken Blossoms
11 - Walter Huston in Cecil Rhodes
12 - Jack Buchanan and Fay Wray in Come Out of the Pantry
13 - Fredric March, Herbert Marshall and Merle Oberon in The Dark Angel
14 - Marlene Dietrich and Gary Cooper in Desire
15 - William Powell and Virginia Bruce in Escapade
16 - Sonnie Hale and Jessie Matthews in First a Girl
17 - Tom Walls and Ralph Lynn in Foreign Affairs
18 - Robert Donat and Jean Parker in The Ghost Goes West
19 - Jan Kiepura in Give Us This Night
20 - Gene Gerrard and George Arliss in The Guv'nor
21 - Herbert Marshall and Jean Arthur in If You Could Only Cook
22 - Owen Nares and Gitta Alpar in I Give My Heart
23 - Joan Crawford and Brian Aherne in I Live My Life
24 - Frank Morgan and Cicely Courtneidge in The Imperfect Lady
25 - Ginger Rogers, George Brent, Louis Mason and Spencer Charters in In Person
26 - Mala and Lotus in Last of the Pagans
27 - Shirley Temple and Bill Robinson in The Littlest Rebel
28 - Ronald Colman and Joan Bennett in The Man Who Broke the Bank at Monte Carlo
29 - Lawrence Tibbett and Virginia Bruce in Metropolitan
30 - Charlie Chaplin in Modern Times
31 - Harry Baur and Laurence Olivier in Moscow Nights
32 - Charles Laughton and Clark Gable in Mutiny on the Bounty
33 - Buddy Rogers, Mary Brian and W.H. Berry in Once in a Million
34 - Marion Davies and Dick Powell in Page Miss Glory
35 - Sir Cedric Hardwicke, Anna Neagle and Margaretta Scott in Peg of Old Drury
36 - Gary Cooper and Ann Harding in Peter Ibbetson
37 - Leslie Howard and Bette Davis in The Petrified Forest
38 - Jean Harlow and Spencer Tracy in Riff Raff
39 - Warner Baxter in Robin Hood of Eldorado
40 - Jeanette MacDonald and Nelson Eddy in Rose Marie
41 - Helen Gahagan and Randolph Scott in She
42 - Dick Powell in Shipmates Forever
43 - Margaret Sullavan and Randolph Scott in So Red the Rose
44 - Katharine Hepburn and Brian Aherne in Sylvia Scarlett
45 - E.E. Clive, Reginald Owen, Ronald Colman, Walter Catlett and Elizabeth Allan in A Tale of Two Cities
46 - Johnny Weissmuller and Maureen O'Sullivan in Tarzan Escapes
47 - Walter Abel and Margot Grahame in The Three Musketeers
48 - Fred Astaire and Ginger Rogers in Top Hat
49 - Leslie Banks and Richard Dix in The Tunnel
50 - Maureen O'Sullivan and Joel McCrea in Woman Wanted

Note: There will be no mailing tomorrow or on any Sunday … END_OF_DOCUMENT_TOKEN_TO_BE_REPLACED

Priscilla Dean (1896-1987) A forgotten star with a foggy … END_OF_DOCUMENT_TOKEN_TO_BE_REPLACED 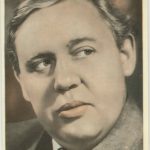