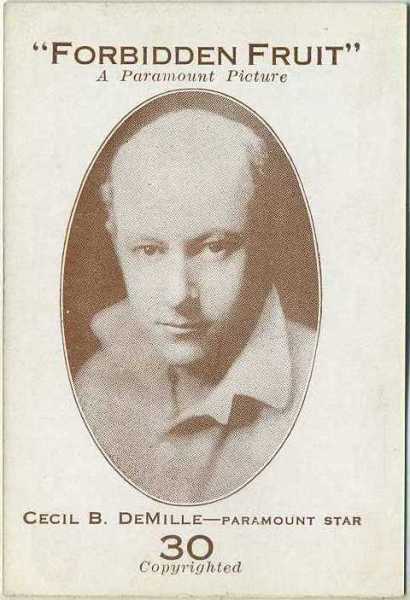 Issued by Paramount Sales out of Chicago.

"Movie Sensations" All Star Game issued as a card deck in package.

Either 36 or 48 card set -- The box and reverse side of each card notes 48 Favorite Movie Stars within, but the instruction card refers to the game consisting "of twelve shows and three characters to each show" or 36 cards. The deck I have, the only one I have seen, contained 36 cards (including one duplicate). The packaging does not appear wide enough to fit an additional 12 cards; perhaps 4 or 5 at most.

"Each show" refers to the 12 different movie titles found throughout the game. 3 different star cards represent each of these movie titles (and checking against the IMDb, the pictured stars are not always listed in the cast of the actual film named).

All of the film titles I could find dated to 1921 with none released any later than September.

Each card also carries a number (for game play) in increments of five between 5 and 30.

Reverse side shows same image for each card. That image is also used on the outer packaging.

Going by the 35 different cards I have on hand (each shown in the Gallery below), key cards include Cecil B. DeMille, Mae Murray, Dorothy Gish and Wallace Reid.

Just click on any image to open to full size and from there you can scroll through the entire set. Each of the 35 cards I have seen are shown. Also shown is an example of the reverse, the instruction card and the original packaging. Text listing of contents follows below.

Diana Allen in Whistle
Agnes Ayres in Forbidden Fruit
* Betty Ross Clarke in Forbidden to Marry (Betty Ross Clark on card)
Ethel Clayton in Sham
Marguerite Clayton in Whistle
Dorothy Dalton in Deception
Bebe Daniels in Too Much Speed
Cecil B DeMille for Forbidden Fruit
William C. de Mille for The Lost Romance (William DeMille on card)
Rubye De Remer in Whistle (Ruby DeRemer on card)
Elliott Dexter in Deception (Elliot Dexter on card)
Dorothy Dickson in Sham
Julia Faye in The Affairs of Anatol
Elsie Ferguson in Sacred and Profane Love
George Fitzmaurice for The Gilded Lily
Dorothy Gish in White and Unmarried
Raymond Hatton in The Great Moment
Wanda Hawley in The Affairs of Anatol
Violet Heming in Sacred and Profane Love
Jack Holt in The Great Moment
Theodore Kosloff in The Affairs of Anatol
Lila Lee in Crazy to Marry
Douglas MacLean in Deception
Thomas Meighan in White and Unmarried
Mae Murray in The Gilded Lily
Conrad Nagel in The Lost Romance
Charles Ogle in Too Much Speed
David Powell in White and Unmarried
Wallace Reid in Too Much Speed
Theodore Roberts in Sham
Ruth Renick in Sacred and Profane Love
Mabel Juliene Scott in The Gilded Lily
Milton Sills in The Great Moment
Kathlyn Williams in Forbidden Fruit (Kathryn Williams on card)
Lois Wilson in The Lost Romance

* My deck included two identical Betty Ross Clarke cards. Which got me thinking.

Mind you, this it total speculation and probably wishful thinking: Betty Ross Clarke represents the film Traveling Salesman, which was released in June 1921. The star of Traveling Salesman was Roscoe "Fatty" Arbuckle, who became associated with one of Hollywood's most notorious scandals in September of 1921.

I find it strange that I would receive duplicate cards in a set that I am imagining is quite rare. Is it possible that Paramount Sales pulled an Arbuckle card from the set or even the print run? I would love to find a second deck of these to see if it includes duplicate Clarke cards or some other card representative of Traveling Salesman (ideally an Arbuckle, of course!).

Priscilla Dean (1896-1987) A forgotten star with a foggy … END_OF_DOCUMENT_TOKEN_TO_BE_REPLACED

Note: There will be no mailing tomorrow or on any Sunday … END_OF_DOCUMENT_TOKEN_TO_BE_REPLACED