Issued by The Eureka Soap Company out of Cincinnati, Ohio.

Each card pictures a turn of the century theatrical actor or actress on one side. Blazing blue and gold Craddock's Blue Soap ad on the other.

Date is taken from 1902 magazine advertisements offering the deck of theatrical stars.

This page is intended to provide you will all of the possible tools required to view, research, collect, and even purchase the cards in this set, as well as the classic film stars included in this set.

The following gallery includes images of the front of all 53 cards from this 1902 deck of Playing Cards plus one example of the beautiful reverse side and images of each side of the box they were sold in. Text checklist follows below.

All of the Following By Diana Savage

The following text and the detailed research composing the checklist below the gallery were submitted to Immortal Ephemera in 2005 by Diana Savage. Very special thanks to Diana for this valuable information, now I turn the page over to her:

These are advertising cards produced by the Eureka Soap Company of Cincinnati, Ohio. They feature stage stars from the early 1900s. Each card features a different star similar to the better known MJ Moriarty playing cards of 1916. The Craddock cards, unlike the Moriarty cards, are theater memorabilia not movie memorabilia. However, the early films made extensive use of theater stars and 22 of the featured individuals are credited by IMDb as having made films. As such these cards are one of the few places that very early stars of films can be found.

I have done my best to date these cards. They most certainly were published between 1898 when Bertha Galland first appeared on stage (Rusche) and within a few years of 1903 when Clare Lipman was forced to retire from the stage due to a hurt arm (Adler & Vizetelly). [Cliff's note, 2011: Definitely 1902, see above.]

Using a rule of thumb that assumed that few of the actress’s would have been become famous enough to appear on cards before their 15th birthday, an age approximate to the age of Blanche Sweet’s and Mary Pickford’s when they first become known, I was able to narrow this down the earliest probable publication date to 1902 or 1903. These dates could easily be a few years off and more conservative estimate places the publication of these cards as being between 1900 and 1905.

Following is a complete list of the cards as well as some basic biographical data on the represented stars: 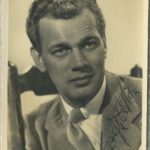 Note: I'm running behind on a few things—including email … END_OF_DOCUMENT_TOKEN_TO_BE_REPLACED