Well, I must admit the first billing of "KARLOFF" in larger letters over second billed "Bela Lugosi" certainly fits here, not to downplay Bela's part in The Invisible Ray as Dr. Benet, but Karloff's Dr. Janos Ruhk really dominates playing both the mad scientist and the monster in this Universal horror effort which also plays as early sci-fi. Lugosi on the other hand, as Benet, actually plays one of the more normal scientists you're going to find on the screen, menacing beard notwithstanding, he's a pretty square guy in this one. 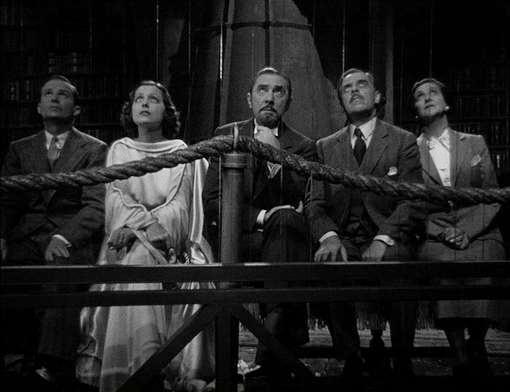 The other 5 main cast members watch as Karloff's Dr. Rukh take them back in time. From left to right: Frank Lawton, Frances Drake, Bela Lugosi, Walter Kingsford and Beulah Bondi

on DVD since its release, but I somehow missed this title my first time through. In fact, I put it on expecting to recognize it right away, but what a pleasant surprise that it was all new! That's what happens sometimes when you just keep buying more and more DVDs! Had you asked me before I saw it I would have said, yup, seen it, and I would have been wrong.

The best surprise at all was that I was really missing something here, I thought The Invisible Ray was extremely entertaining and my own tastes would probably bump it a little ahead of the IMDb user rating of 6.6/10.

From the creepy opening of Rukh's castle on a mountaintop, through his astronomical tour of the earth's past, his infection by Radium X while uncovering the meteor seen during that prehistoric tour in modern Africa, to the insanity and murderous impulses that said infection brings about, The Invisible Ray layers the fantastic throughout its entire 80 minute run-time, going above and beyond with a cool effect where Rukh uses the Ray to disintegrate a boulder and the awesome site of a glowing Karloff throughout the second half of the film.

, this was accomplished by having:

"...a crew of girls working around the clock, three eight hour shifts. We had three stands, these were overhead cameras projecting down onto animation boards. The girls would pencil-in the hands and face, one frame at a time, and these would be painted onto cells so that the hands and face were black. There was well over a thousand feet of these mattes, so this involved more than 16,000 of these drawings. I was there every four hours, day and night, from the time the job started until the time all the mattes were inked and painted."

Karloff's wife at the start of this, the mustached, frizzy-haired, 49-year-old Karloff, is the stunning Frances Drake, who I've developed quite the crush on after a month including viewings of Les Miserables (1935) and Mad Love (1935). Drake's Diane Rukh fortunately comes to her senses as her husband, who she found herself with after her father died in his service (guess there weren't too many men to chose from up on the mountaintop), grows from an introvert to a madman and all but abandons her on the African expedition.

A little more Frances Drake before we go, pictured here on a 1930s tobacco premium from Uruguay

Also featured are Walter Kingsford as Sir Francis Stevens and his wife, Lady Arabella Stevens played by character actress Beulah Bondi. Sir Francis is partnered with Lugosi's Dr. Benet in confirming Karloff's discovery and hosting the African expedition where actual Radium X is uncovered by Karloff. Along with them are their nephew, Ronald Drake, played by Frank Lawton, a fresh-faced young man with a deep attraction to Karloff's young wife.

Lugosi's highlights come in his scenes with Karloff, both when Karloff comes to him seeking a cure and at the end when Karloff is seeking revenge against all those on the expedition. Lugosi's Benet is the more level-headed of the two scientists, for example, while Karloff seeks world domination through the Radium X discovery, Lugosi hopes to use it for good and keep its power from the hands of any one man, especially a nut like Dr. Rukh.

Violet Kemble Cooper is also excellent as Karloff's stoic and sightless mother, the classic blind seer who advises her son not to join Lugosi and company in Africa knowing full well that he doesn't play well with others. When Radium X drives Karloff to murder it's a run-in with his Mom that manages to knock the crazy out of him long enough to gain an understanding of what he's doing.