Jean Muir would spend her film career under contract to Warner Brothers until 1937, when she freelanced some in Hollywood before a failed attempt to return to the stage. A TV deal in 1950 would blow up less than two hours before she was to go live, as Muir was mistakenly fingered as a Red. This precipitated a descent into alcoholism which she would pull out of by 1960, when she made some appearances both on television and on Broadway. Eventually Muir became a master acting teacher at Stephens College in Columbia, Missouri--I have that date as 1968, then nothing following it until her death, July 23, 1996.

I'm mostly familiar with Jean Muir through her appearances alongside Warner's leading man Warren William. Besides Dr. Monica (1934), which is on my DVR awaiting viewing, she featured with William in the excellent Bedside (1934), though is in my view perhaps the weakest link of that overall strong movie. I preferred her alongside William again, later on, as the female lead in Columbia's Lone Wolf Meets a Lady (1940). The biggest title Jean Muir was a part of was A Midsummer Night's Dream (1935), and she names Desirable (1934), in which she's opposite George Brent, as her own favorite.

, John Springer and Jack Hamilton mention Muir's auspicious start at Warner's and note "another studio might have thought of her in Hepburn terms," before going on to criticize Warner's subsequent use of Muir:

But Warners threw her into everything that came along--program pot-boilers, "B" mysteries, undemanding supporting roles, even a stint opposite Joe E. Brown ... you would go to a Jean Muir film, however humble, with high hopes that perhaps this time they would have given her a role in which she could make some use of her expressive gifts--Those hopes were always dashed. 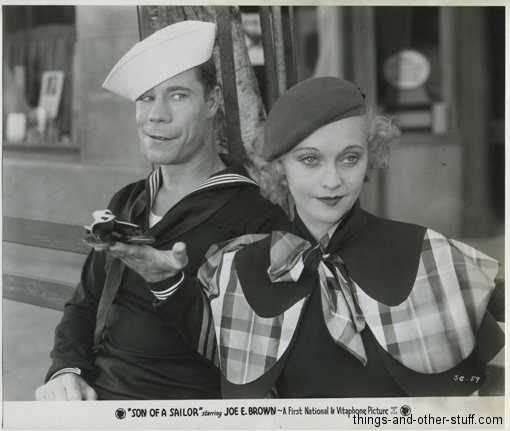 Muir was born Jean Muir Fullarton in New York City on this date in 1911. After a tour of Europe was ended by the great Stock Market crash, Muir came home to New York and played on the stage rising from understudy to star in John Drinkwater's Bird In Hand.

by Arthur F. McClure and Ken D. Jones the authors note that Muir "by her own admission she was somewhat of a rebel, had high principals, disliked Hollywood and wanted to return to the stage," when her contract with Warner's expired in 1937. The IMDb backs this up in the Trivia area of Muir's entry stating that she was "nicknamed 'The Studio Pest' because she always had questions about everything from camera angles to publicity practices." Of her attempted stage comback, McClure and Jones add, "By then she was undisciplined for the stage and she returned to Hollywood in 1940 to do And One Was Beautiful for MGM."

The same authors explain Muir's blacklisting as being a case of her joining a questionable group because she thought its sole intention was to support President Roosevelt. The IMDb quotes her as saying, ""I am not a Communist, have never been one, and believe that the Communists represent a vicious and destructive force, and I am opposed to them."

"Star Quality" was published in 1974 and it appears the authors had a chance to chat with Muir, as her entry includes mention of her favorite director being Mervyn Leroy and that her closest Hollywood friends were Joan Crawford and James Cagney.

Piecing together all of the quotes with Jean Muir's resume I have to agree with the conclusion of Springer and Hamilton - Despite her talent, Warner Brothers wasted Jean Muir.

Read about the movie Jean Muir named as her favorite, Desirable (1934), at Laura's Miscellaneous Musings HERE.