You are here: Home / Movie Reviews / Three on a Match (1932) starring Warren William and Ann Dvorak

It only takes 63 minutes to move from 1919 to 1932, watch three very different school girls grow up, sport a cast of so many names and faces that young Bette Davis and Humphrey Bogart are really just overkill, plus tell a nifty little crime story slathered with pre-code nuance. I really don't think it's possible to do more, and do it as effectively, on film than Three on a Match does with it's 63 minutes.

I revisited this favorite eight years later in a separate post—here is that 2017 article.

The story starts with younger actresses, including Anne Shirley, playing schoolgirl versions of Ruth, Mary and Vivian--these three very different girls would grow up to be women played by Bette Davis, Joan Blondell and Ann Dvorak. A chance meeting leads to the encounter that our title is drawn from.

Vivian, always so proper even as a young girl, is very well-off through her marriage to Robert Kirkwood, played by Warren William. Despite the roll call of stars, Three on a Match is Ann Dvorak's film. As Vivian, she has become bored with the lifestyle Bob Kirkwood has built for her and their son, Bob, Jr. (Buster Phelps). In their first scene together, Vivian quickly changes into her nightgown, pulls up the covers and feigns sleep, while Bob tucks in Junior. Bob catches Vivian's glance up at him through the mirror and immediately though politely confronts her (Yeah, it's a nice-guy role for William this time around). She admits her boredom and is packed off on a cruise with Junior, but without Bob, to take a break from the marriage. 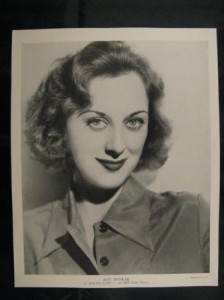 Viv never leaves the harbor. Blondell's Mary happens to be attending a party on board before the ship sails, and along with Michael Loftus (Lyle Talbot) she twists Viv's arm getting her to come join the fun. Once partying, there's no turning back for Viv, who also falls hard for Loftus. Dvorak and Talbot shack up together in the city and a devastated Warren William knows nothing of her or Junior's whereabouts. Finally, Mary (Blondell), sickened by the treatment of the young boy, rats out Viv to Bob, who comes and fetches his little shaver.

Troubles mount as Loftus owes a gambling debt to Ace, played as a tough-guy by Edward Arnold in a very brief appearance, which he figures to pay back by kidnapping Junior and holding him for a ransom. Meanwhile, Bob and Mary have become involved and Ruth (Bette Davis) is also around as an awkward third wheel whom Bob hires on to take care of his son. As the plot hatches forward, Loftus and Viv are holed up to deal with Ace's henchmen, each quite menacing as played by Jack La Rue, Allen Jenkins, and especially Humphrey Bogart. Yes, even Jenkins is kind of scary!

Ann Dvorak really kicks it into overdrive in the last portion of the film under Bogie's lock and key. She's definitely graduated from mere boozing into harder drugs as she's a total mess: dark eyes, twitchy, racing speech. Junior is dirty and starving and his life is put at stake by more than just the shabby living conditions! In the end, the little girls seemed to have swapped their expected places, and the old adage about the match comes true.

Interesting aside, as title cards early in the picture explain the entire "three on a match" phenomena, they trace the phrases origins to match king Ivar Kreuger. Well, who played Ivar Krueger in The Match King but good old Bob himself, Warren William.

This movie is so packed with faces that beyond the major players already mentioned there are brief appearances by Glenda Farrell, Patricia Ellis, Mary Doran, Grant Mitchell, and even a twelve-year old Jack Webb, who I had no idea was an actor this early!

It's very hard to write up a movie like Three on a Match without giving it all away, as there is so much packed into such a brief time stream that I'm tempted to tell you more--hopefully I've given you just enough of a taste here though without spoiling it.

Three on a Match is a pre-coder that pretty much puts it all in your face: sex, violence, child abuse, drug abuse, and more. It's a fast and dirty movie, though even if you lean towards more polished films it still serves as a curiosity as an early vehicle for Bette Davis and Humphrey Bogart. The rest of the cast, highlighted by Dvorak, Blondell and William, is like a roll call of forgotten stars who should be remembered.

The most surprising thing to me about Three on a Match would be playing it for somebody who didn't like it. It's just that good.

For more about Three on a Match see my 2017 post here.