You are here: Home / News - Notes / Ronald Reagan and Family, Care of General Electric Theater, Wishing You a Merry Christmas

Remember when the Christmas marketing push didn't kick off til the day after Thanksgiving? Well, we're not there yet, but I can tell you it's 43 days til Christmas as I write this. It's in the top left corner of every eBay page and has been for over a week now.

You've just got to chuckle when everything moves blink of an eye today; everybody wants instant gratification; we're ready to make or break anyone with a hair trigger judgment; we want it all right now and then we're ready to forget about it to move on to the next thing--now. Yes, somehow the Christmas push now kicks off as soon as we sweep Halloween candy wrappers out the door and flip to the next calendar page. I guess the only way we could have avoided it would have been to have come up with something less perishable to buy and sell for Thanksgiving.

(hey, just 42 days til Christmas now!) and I have to say that the content of the photos and the timing of the season excited the salesman in me, I'm so happy that eBay has alerted us all to the coming Christmas otherwise I may have held these back another week or two.*

*Actually I have no patience at all for good timing, I would have listed these babies in July had they come through the door then.

There were some great pics in the lot including a 1940 Press Photo showing Reagan with Jane Wyman on their wedding day and several great head shots of the man who would be 40th President during his TV hey day of the 1950's. The four photos I've chosen to highlight on this page though are all Christmas themed photos showing Ronald and Nancy Reagan with their children, Ron Jr. and Patti Davis.

All of the photos were released to the press in December of that year in anticipation of the special Christmas episodes of Reagan's General Electric Theater. More specifics can be found under each of the photos: 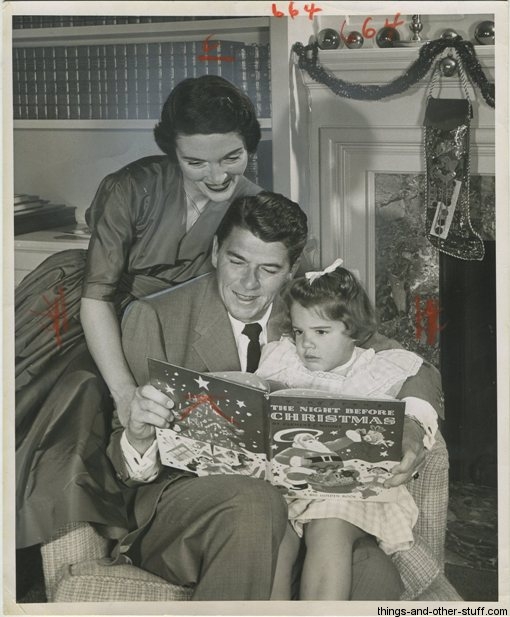 This first one was my favorite, though I can't name the exact promotion because the press tag was missing. Ronald reads The Night Before Christmas to daughter Patricia with wife, Nancy, looking on over his shoulder. Date stamped December 12, 1955 on back.

2-1/2 year old Ronald Reagan, Jr. is an addition to the family at the time of this December 1960 photo. This one has a large descriptive press tag on back from General Electric Theater announcing that the Reagan family will host a Christmas day airing of Henry Van Dyck's The Other Wise Man from their Pacific Palisades home. The Other Wise Man, starring Henry Townes, will air as part of General Electric Theater, Christmas night, 1960, from 9:00-9:30 pm EST on CBS.

Another year has gone by and not much has changed except I'd imagine the 1960 broadcast of The Other Wise Man was popular because General Electric Theater is repeating the performance, same time, same channel, December 24, 1961. 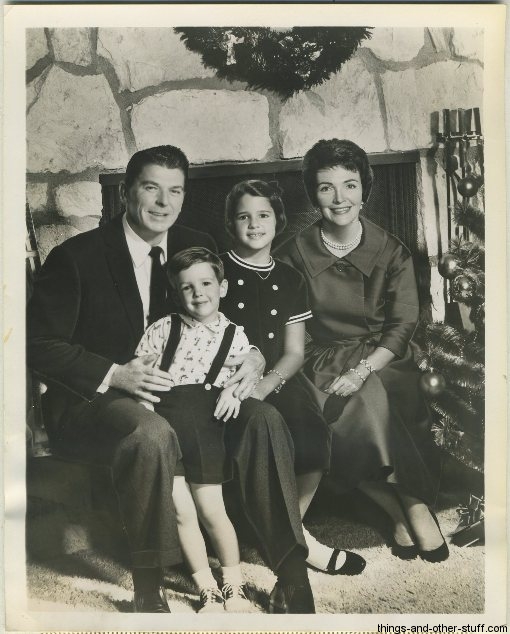 Finally this December 8, 1961 photo is promoting the exact same telecast as the previous photo, the only difference is that this one has a press tag from CBS itself while the photo above it has a General Electric Theater press tag. Obviously from the same sitting.

My Own Blatant Christmas Commericalism: