What the heck, for about $6 including shipping I picked up a coverless copy of the August 1932 issue of Motion Picture Magazine off eBay just to have something around here I didn't have to handle with kid gloves for a change! Well, it's been great fun paging through and I have a feeling that there will be more than a single post coming out of this magazine as there's fun on every page and what more fun than to illustrate the most interesting parts with items from my stock and image archives!

The article Stars Who Have Vanished by Jack Grant is just built for blogging about. It's a list of over 300 "former stars" that the author has sought out the then current (1932) whereabouts of. As I read through it I realized it's almost a checklist of the late 1910's Kromo Gravure cards that I've covered in so many ways on this site. This coverage comes with a twist right up my alley. What follows are images of the stars from circa 1917-1920 as they appeared in the Kromo Gravure boxed sets of trading cards issued those years along with the whereabouts of these former silent stars circa 1932.

I find stuff like this fascinating. I've been staring at these images for so long, so many times, over the years of selling these cards that I can call up a mental image of Belle Bennett or Jewel Carmen just at mention of their names. But I've got to be quite honest, I have no idea of the fates of probably 75% of the 200 stars pictured in the 1910's Kromo Gravure sets--they're not all Charlie Chaplin or Tom Mix! But this exercise allows me to take a trip back to 1932 to see what their fates were at that precise moment in time--and after the first few my natural curiosity sent me off to the IMDb, Wikipedia and in a couple of cases NewspaperArchive.com, find out how their stories finished.

After getting started and spending a couple of hours hopping around to put this page together I discovered I had a long way to go. Guess what, that makes this Part 1 of, if I had to guess, 4 or 5 more entries. I don't know how soon Part 2 will come, but it's coming. Look for some other posts in between though.

The format of these is as follows: Name is linked to star's IMDb page in case you want some more info. Text following name is from 1932 Motion Picture Magazine article. Any text inside parenthesis is mine. A 1917 Kromo Gravure card picturing the star follows each bit of text.

Roscoe (Fatty) Arbuckle - Once the king of comedians, he is now on a vaudeville tour, attempting a comeback. Since his enforced retirement ten years ago, he has made a living as a director of short comedies under the name of William Goodrich. As readers of this magazine know, Fatty received enthusiastic support last year from the public, when producer-friends made a plea that he be allowed to return to the screen. The present tour is for the purpose of further feeling out public opinion. 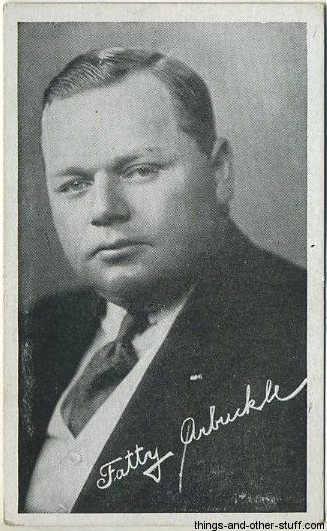 Wesley Barry - Freckle-faced youngster of silent days is now 25, and leads jazz bands and serves as master of ceremonies in film houses throughout the country. (Sounded like he was headed for a fall there, but Barry actually became pretty successful at a variety of tasks on the other side of the camera including directing and producing. Really I just love this card and wanted an excuse to include it!)

Beverly Bayne - Remarried following her divorce from Francis X. Bushman, and is said to be living in Chicago. Makes a vaudeville tour occasionally.

Belle Bennett - The memorable mother of "Stella Dallas," finding screen roles scarce opened a roadhouse called "Grandma's Farm," near Hollywood last year, It closed after a few months, and she is now in vaudeville. (A sad one, Belle Bennett died of cancer not long after this magazine's publication, November 4, 1932. The IMDb gives her age at her time of passing as 40, I've seen obituaries ranging from age 39-42).

Enid Bennett - Accepts a role every so often, if it appeals to her. Last appearances as Skippy's mother. Married to Fred Niblo, the director, and is the real mother of three children.

Constance and Faire Binney - Both married well and make periodic appearances on the New York stage. (Constance Binney is pictured on the card below. Her last film was released in 1923, she lived until 1989, age 93). 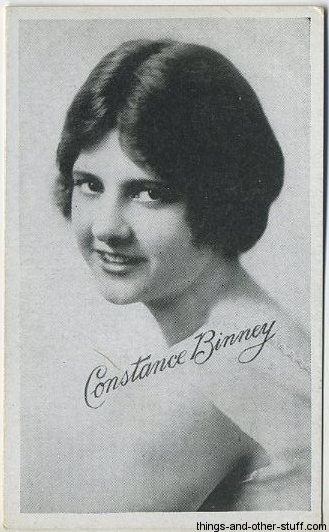 Gladys Brockwell - Tragic character actress was killed in Los Angeles auto accident on July 2, 1929. (I didn't know this, and after reading the bio of her on her IMDb page I feel pretty terrible). 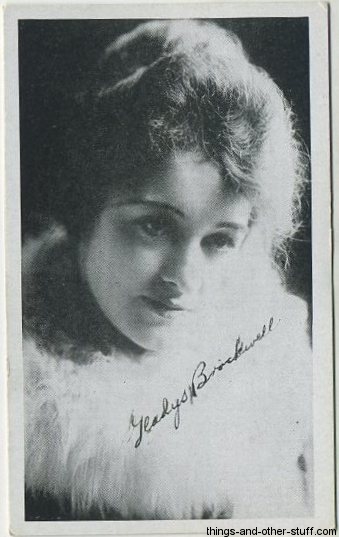 Francis X. Bushman - Now in vaudeville. Recently injured in auto accident in England, he sued for $10,000 in damages. Last year he got a big amount of publicity by saying he was in the market for a wealthy wife.

Alice Calhoun - Married to Mendel B. Silverberg and lives in Beverly Hills. A leader in the movements of local women's clubs. 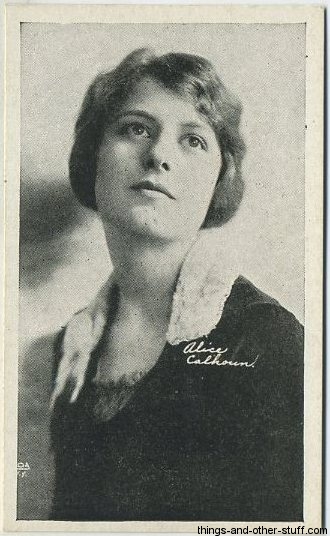 Catherine Calvert - Widow of Paul Armstrong, the playwright. Was badly injured some years ago in an auto accident and is now a semi-invalid. Her son is preparing to make a screen debut. (Armstrong died in 1915; the IMDb has no record of a son in films. Sounds pretty miserable, but Ms. Calvert did survive until age 80 in 1971. I hope things got better).

June Caprice - Widow of Henry Millard. Has a young daughter and is prominent in local society. (Millard died in 1931; the daughter grew up to be Toni Seven, who's had a most interesting life! Caprice died a few days shy of age 41 in 1936).

Jewel Carmen - Married Roland West, the director-producer, and retired. (And stayed retired. Lived to age 86 in 1984).

Irene Castle - Famous dancer and style-setter married the Chicago McLaughlin millions and became a crusader against cruelty to animals. An argument with a farmer about the cleanliness of his pig pens recently put her in the headlines. The farmer won the debate by proving pigs is really pigs. (How could I not include that? Anyway, you're probably aware of Ms. Castle's input on the Astaire-Rogers film The Story of Vernon and Irene Castle (1939), though by this point she'd never appear on camera again. Died in 1969, age 75).

Marguerite Clark - Married and living on a plantation near New Orleans as Mrs. Harry Palmerston Williams. Her husband was lately a nominee for Governor of Louisiana. (Williams would never be Governor, he's described as an airplane manufacturer who died in a 1936 plane crash. Clark herself passed away in 1940, age 57, from pneumonia).

Miriam Cooper - Divorced from Raoul Walsh, the director, and present whereabouts unknown. (Mysterious! Not really, published what looks like a very interesting autobiography, Dark Lady of the Silents

Marguerite Courtot - "The Mutual Girl" is now Mrs. Raymond McKee. With her husband, she operates a Culver City roadhouse, the Zulu Hut. (Remained Mrs. McKee for 61 years, until his death in 1984. Died in 1986, age 88).

(Since the time of this post I've added a very detailed Marguerite Courtot biography to the site.)

Dorothy Dalton - Once-famous in society dramas, she is now retired as the wife of Arthur Hammerstein, the stage producer. Living on a Long Island estate. (Check. Final film, 1924. Married to Hammerstein for 31 years until his 1955 death. Died in 1972, age 78).

...And I've just realized this list is alphabetical and I'm only in the D's! I think we've got a series here as there are several more pages to weed through and my own curiosity is getting the better of me in trying to find out what happened to these silent stars!